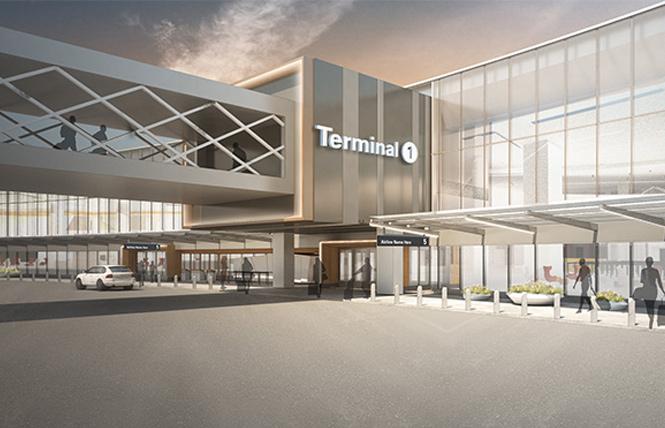 A rendering of the exterior of the new Terminal 1, which will be named after Harvey Milk. Photo: San Francisco International Airport

San Francisco's airport will be the first in the world to honor an LGBT leader by naming one of its terminals after gay icon Harvey Milk.

The Board of Supervisors unanimously voted Tuesday to designate Terminal 1 at San Francisco International Airport after Milk. Sworn in 40 years ago as a city supervisor, Milk was the first out LGBT individual to hold elective office in both San Francisco and California.

Tragically, Milk and then-mayor George Moscone were assassinated inside City Hall by disgruntled former supervisor Dan White the morning of November 27, 1978. Since then Milk has become a globally celebrated pioneer in the fight for LGBT equality.

In February, Mayor Mark Farrell told the Bay Area Reporter that he supported the Milk terminal proposal. Following Tuesday's action by the supervisors, the legislation will now be sent to Farrell for his signature.

"Harvey Milk was a larger-than-life presence whose legacy continues to inspire people in this city," Farrell told the B.A.R. Tuesday. "He embraced everything that we value - compassion, inclusiveness, and a commitment to defend those facing oppression. It is so fitting that when people arrive in our city, they will now do so in a terminal named after Harvey."

The mayor is expected to sign off on the terminal naming in the coming weeks ahead of this year's commemoration of Harvey Milk Day. A state day of special significance, it is observed in California every May 22, Milk's birthday.

"This is very special. Harvey glowed when things like this happened," said gay former supervisor Harry Britt, who was named to Milk's seat after his death. "He fought for progressive causes and tried to make the world a better place, but what turned him on was stuff like this."

In 2013 gay former supervisor David Campos scrapped his idea to rename San Francisco International Airport after Milk due to a lack of support. Instead, he and the late mayor Ed Lee compromised on naming one of the airport's four terminals in honor of Milk.

After years of delays by Lee in naming his appointees to an advisory panel tasked with selecting which terminal should bear Milk's name, it voted in June for Terminal 1. With the facility undergoing a $2.4 billion remodel that will be unveiled in stages through 2024, panel members reasoned the years of media coverage for the project would help publicize it being named the Harvey Milk Terminal.

District 9 Supervisor Hillary Ronen, a former aide to Campos, nine months ago introduced the legislation for the Milk terminal naming.

District 8 Supervisor Jeff Sheehy, the board's lone gay member, co-sponsored the legislation. He told the B.A.R. this week that he will now push separate legislation to change the airport's address to 1 Harvey Milk Way. Its current mailing address is merely a PO Box number.

"It's great to get the terminal named for Harvey Milk. I will continue to push for the street's naming," said Sheehy.

Campos, who received death threats when he first floated his idea to name the entire airport after Milk, believes the Milk terminal will have global significance. While Terminal 1 is mainly used for domestic flights, it will have gates set aside for international flights to use.

"Milk is a symbol of equality and a symbol of freedom not only for LGBTQ people but anyone that struggles," Campos, now a deputy county executive in Santa Clara County, said last month when the board's budget committee backed the terminal naming idea.

Having the hundreds of thousands of people traveling through Terminal 1 learn about Milk will be "a powerful thing," noted Campos.

"My hope is it not only motivates more people to learn about our history but inspires us to be more engaged in the fight for equality because that fight remains," noted Campos.

At the March 22 hearing District 2 Supervisor Catherine Stefani spoke of how her sister struggled to come out to their Italian family in the Central Valley where they lived.

"I have always been inspired by Harvey Milk," said Stefani, appointed earlier this year to fill the seat vacated by Farrell when he was elected mayor by a majority of the board until a winner is certified in the June 5 election.

Gwenn Craig, an African-American lesbian who worked on Milk's 1977 election campaign, said at the hearing last month that the terminal naming ties into Milk's message for LGBT people to come out of the closet and be visible. She noted that Milk always said his victory was a global message that San Francisco was a welcoming place for all LGBT people.

"So, today, I believe as visitors and new residents come back or come here through a terminal named for Harvey Milk, and know or come to know who he was, what he did and what he represents for the history of our city, they will know we are still living up to be the city he promised we could be," said Craig.

The cost for the signage of a Milk terminal is estimated at $357,000, which includes $22,000 to replace existing signage and $335,000 to place a new building sign on Terminal 1. There is already $4.1 million allocated for the terminal's signage as it is remodeled.

According to Jon Ballesteros, a gay man and SFO's chief external affairs officer, the airport may incur additional costs to place new signs at entrances, curbside, entry doors and garages as a result of the Terminal 1 renovation. It is not expected that highway signs will need to be changed to reflect the terminal's new name.

Ronen added an amendment requiring the arts commission to sign off on the designs for the signs by this September. And the airport director is required to submit a report to the supervisors and mayor by December 1 describing the steps the airport has taken and plans to take to implement the naming of the terminal in honor of Milk.

Gay state Senator Scott Wiener (D-San Francisco), who co-sponsored the original legislation to name a terminal after Milk when he served on the board, released a statement shortly after the vote Tuesday thanking Ronen and Sheehy for ensuring it came to be.

"When people fly into San Francisco, they will be greeted by Harvey's name and his spirit, and we could not ask for a better ambassador for our city," stated Wiener. "In this time when our community is being challenged and attacked across the country, we can all celebrate knowing that Harvey's legacy lives on here in San Francisco."

Matthew S. Bajko can be reached at m.bajko@ebar.com.