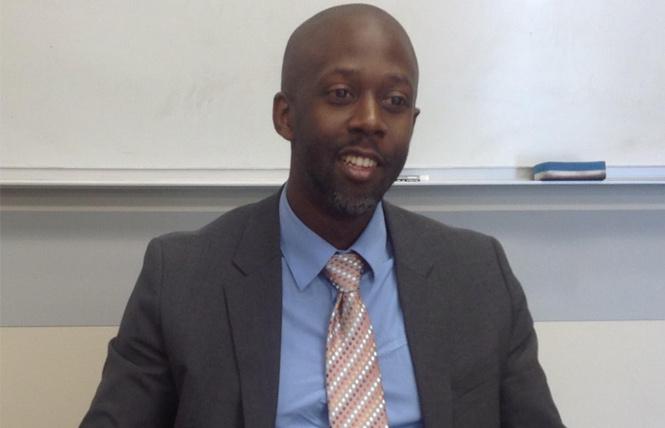 African-American and Latino men continue to have a disproportionately high likelihood of new HIV infections, according to the latest HIV surveillance data from the Centers for Disease Control and Prevention.

HIV incidence, or new infections, declined by 8 percent overall in the United States between 2010 and 2015, but young gay and bisexual men saw a rising rate. And, while all racial and ethnic groups have seen declines in new infections, African-American and Latino men continue to be infected at rates that are troubling to officials.

"The CDC's updated HIV data confirmed what we have been seeing in the field," Ace Robinson, HIV commissioner for South Los Angeles, told the Bay Area Reporter. "The new patients coming into our lobbies are getting younger and it's overwhelmingly becoming mostly black gay men and transgender women."

HIV incidence refers to new infections, and prevalence refers to total existing infections. These are harder to estimate than new HIV diagnoses - or positive HIV tests - which can reflect either recent or old infections. Some people remain undiagnosed for years after they become infected, in some cases until they develop symptoms of advanced illness.

Researchers can use CD4 T-cell counts to estimate the time since infection, because these immune cells decrease at a predictable rate in people with HIV who are not on antiretroviral treatment. The delay between infection and diagnosis (when the first CD4 test is typically done) can then be used to produce estimates of HIV incidence and prevalence.

HIV incidence decreased among women and remained stable among men between 2010 and 2015. In 2015, men had nearly a five-fold higher likelihood than women of becoming infected (31,600 versus 6,900 new infections, respectively). Transgender people were not included due to inadequate data, the report notes.

By far the majority of new infections occurred among men who have sex with men. For women, heterosexual sex was the biggest risk factor.

New infections decreased between 2010 and 2015 among African-Americans and people who identified as mixed race/ethnicity, while remaining stable among whites, Asians, and Latinos.

However, black people still had the highest absolute number and the highest rate of new infections (49.5 per 100,000) - almost twice as high as the rate among Latinos (23.4 per 100,000) and many times higher than the rates among whites and Asians (6.0 and 5.0 per 100,000, respectively). Looking in more detail at the numbers for African-American men, 80 percent were gay, bi, or had sex with men without identifying as such, and 70 percent were age 34 or younger.

"The HIV field as a whole has completely failed black queer people," Robinson, who is gay and black, told the B.A.R. "When nearly all other populations are beating the epidemic in the U.S. except one large group, something is not working."

Looking at prevalence, an estimated 1,122,900 people age 13 or older were living with HIV at the end of 2015, of whom about 15 percent had not yet been diagnosed, according to the report.

SF figures
San Francisco is widely acknowledged as a leader in reducing new HIV infections, through efforts that include expanded testing, rapid antiretroviral treatment, and widespread use of PrEP.

The latest San Francisco HIV epidemiology report, released last September, showed that new HIV diagnoses fell by 16 percent from 2015 to 2016, and declined by 49 percent since 2012.

While San Francisco's population and HIV epidemic look different from the national picture - including the city having a larger proportion of gay men and a substantially smaller proportion of African-Americans - some of the disparities are similar. Blacks make up about 6 percent of the city's population but account for 15 percent of new HIV diagnoses. And while the diagnosis rate for black men fell last year, it remains more than double that of white men.

"New HIV infections in San Francisco are declining at a faster rate than ever, and the city continues to do better than the nation in reducing new infections," lesbian Health Director Barbara Garcia said when the report was released. "Better yet, new infections are dropping among all groups, including African-American and Latino men, and we are starting to close the disparity gap. It is essential that we focus on disparities in order to get to zero."

The city's Getting to Zero initiative aims to make San Francisco the first city to achieve the UNAIDS goals of eliminating new HIV infections, deaths due to HIV/AIDS, and stigma against people living with HIV. Coalition members have set a deadline of 2020.

The CDC report says that the primary national HIV prevention goal is to reduce the annual number of new infections, with a key objective being to increase the percentage of people living with HIV who are aware of their status. People who are diagnosed can be linked to care and receive treatment to lower their viral load, which both reduces their chances of becoming ill and the likelihood of transmitting the virus.

"Today we have PrEP, a medication that finally prevents HIV. We also know that undetectable equals untransmittable, which means not only that people with HIV who take their medication properly will live a long and healthy life, but it also eliminates the chance of transmission to another person," Robinson said. "We have all the necessary tools to end AIDS in America. But not everyone knows about those advancements, nor does everyone have access to them. We have reached a moral crossroads. Either we choose to do this now or choose never."

Liz Highleyman can be reached at liz@black-rose.com.