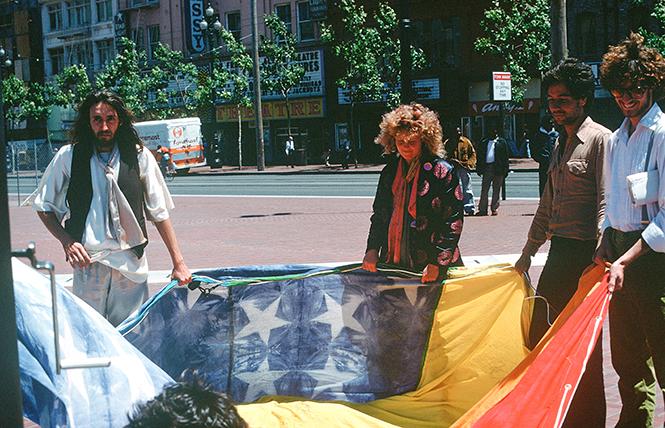 A woman who helped create the first rainbow flags is coming forward to tell her story and ensure her involvement, and that of another artist, is not lost to history.

The now iconic six-colored rainbow flag was first flown under a different design 40 years ago at the 1978 Pride parade and celebration in San Francisco. Over the decades since, Gilbert Baker has been credited as the rainbow flag's sole creator.

Baker died a year ago this Saturday, March 31, at the age of 65. Many of his news obituaries, including that in the Bay Area Reporter, referred to him as "the gay Betsy Ross" for his connection to the rainbow flag.

Lynn Segerblom doesn't deny that it was Baker who was instrumental in turning the rainbow flag into a global symbol for LGBT people. But in a first person account published in early March in the Los Angeles Blade LGBT newspaper and in a yet-to-be-released documentary, Segerblom contends the first rainbow flags were collaboratively designed and made by herself, Baker, and their friend James McNamara, who died of AIDS in 1999.

"It really is a three person, not a one person, flag making. Everybody played their part and then some," Segerblom, 61, told the B.A.R. in a recent phone interview from her home in Torrance, southwest of Los Angeles.

Segerblom was 18 and newly arrived in San Francisco when she befriended Baker and McNamara. It was the mid-1970s and Segerblom, who grew up in a military family that moved every two years, had taken on the name Faerie Argyle Rainbow.

"The rainbow itself was something I just loved," explained Segerblom.

Into tie-dyeing fabrics in rainbow hues and making clothes and costumes with the material, Segerblom at one point shared an apartment with Baker and McNamara. She also rented space at the city's first LGBT community center, which in the 1970s was located at 330 Grove Street, where she could make her fabrics.

Also housed in the building, later torn down by the city to build a parking garage, was the committee that oversaw the city's Pride parade. It had created a decorations committee for the 1978 parade co-chaired by Segerblom and Baker.

At that time a reflecting pool sat in the middle of the city's Civic Center Plaza in front of City Hall where the parade ended and a rally and celebration were held. Ringing it were flagpoles. In the adjacent United Nations Plaza were two larger flagpoles fronting the Market Street entrance into the area.

According to Segerblom, the parade committee that year had gained city approval to use the flagpoles during Pride weekend and tasked the decorations committee with figuring out what flags to fly. It also gave the artists funds to buy materials to make the flags.

As Segerblom wrote in her first-person account in the Blade, she and McNamara volunteered to design the flags for the two larger flagpoles, while other artists were selected to create smaller flags to be flown around the reflecting pool.

"Now, what to put on them? I'm sure we all had a meeting about this but I was 'the Rainbow Faerie' so I wanted them to be rainbow colored flags. We all agreed," wrote Segerblom.

In her written account and interview with the B.A.R., Segerblom said she chose the eight colors that made up the first flag: pink, red, orange, yellow, green, aqua, royal blue, and violet.

"I wanted it to be a full rainbow, not like a quasi rainbow," said Segerblom, who also opted to include a corner section with stars to mimic the design of the American flag.

The design for her "stars and stripes" rainbow flag, as she wrote in the Blade piece, included "a lamé star stitched to the aqua stripe, silver lamé on one side, gold lamé on the other side."

Herself, McNamara, and Baker all brought their sewing machines down to the LGBT center and worked with a crew of volunteers, Segerblom said, in order to complete the two large rainbow flags in time for Pride.

"We really needed volunteers. We were swamped," said Segerblom, who back then was a member of the Angels of Light Theater Company.

At the time, recalled Segerblom, none of the flag makers were thinking they were making a symbol for a movement.

"We were just trying to think can we get them done in time for the parade. None of us were thinking, 'Oh, yes, this would be the symbol of the LGBT community.' We didn't know," said Segerblom, who dated women in her youth but now identifies as straight. "It looked great once we got it up there. It looked beautiful."

A decade after the 1978 Pride celebration, Segerblom moved to Los Angeles and enrolled in acting school. She lost touch with both Baker and McNamara. She told the B.A.R. she was a starving artist working odd jobs to make ends meet and wasn't aware of Baker's growing notoriety as the creator of the rainbow flag.

"It didn't make me feel good," said Segerblom. "I was shocked, really, and disappointed but I loved Gilbert."

She acknowledged to the B.A.R. that she was not involved in the design of the rainbow flag most people now associate with the LGBT community.

"That came after. I have to credit Gilbert for pounding the pavement for 40 years and promoting the flag. He was a great promoter," said Segerblom. "But that first year we made them, the three of us flag makers. There were three of us who were making the decisions."

Lasting symbol
Longtime LGBT rights activist Cleve Jones was close friends with Baker and wrote about the history of the rainbow flag in his recent memoir "When We Rise." He told the B.A.R. that Baker deserves to be remembered as the person who turned the rainbow flag into the symbol it became for the LGBT community.

Jones said he remembers Segerblom well and described her as "an absolute sweetheart." Nonetheless, he said she was "one of many people who assisted Gilbert. All of Gilbert's artworks were monumental and required lots of people."

Segerblom "certainly was there," said Jones, "but to say she is the co-creator of the rainbow flag is not accurate."

Noted gay photographer Dan Nicoletta, who worked at an art gallery housed at the LGBT center on Grove, befriended both Baker and Segerblom in the late 1970s. He was around the building when the flags were being made.

"I think it is coming from a place that the three of them deserve credit. I don't necessarily think she is asking for equal credit," Nicoletta told the B.A.R. "She is identifying something that has eroded over the course of the story."

In 2015 Baker did credit both Segerblom and McNamara for assisting him with the creation of the first rainbow flags in an interview with the Museum of Modern Art in New York City. It was timed to the arts institution's acquisition of the rainbow flag that June into its design collection.

The intro to the conversation between a museum curator and Baker credits him as the artist who "created the Rainbow Flag in 1978 in San Francisco." During the interview Baker was asked to talk about some of the many volunteers who helped make the first flags, according to a transcript posted to the museum's website.

He credited Jones with helping secure $1,000 from the Pride committee to buy the fabric for the flags and recalled next calling his friend Segerblom, whom he described as "a hippie girl, was the queen of tie-dye." Because Baker said he "knew I wanted to do an organic dye process," he called Segerblom, "and she was totally game. We made such a huge mess, we had so much fun!"

Baker recalled then calling McNamara, who had attended the Fashion Institute of Technology in New York and "was the only person who knew how to sew as well as I did."

Paul Langlotz knew McNamara as a teenager in Bergen County, New Jersey and later reconnected with him while living in the Bay Area in the 1970s. He also befriended Baker and Segerblom at that time.

"My assumption had always been, since Lynn's name with the Angels of Light was Faerie Argyle Rainbow, that the rainbow idea for the flags came out of her nom de plume," Langlotz, a clinical psychologist who now lives in southern California, told the B.A.R. by phone. "I think she is simply trying to claim credit where credit is due. Specifically, she is the person who literally did the dying of the fabric that was the first rainbow flag as well as coming up with the idea."

When McNamara became ill, Langlotz helped care for him back East. Before he died, McNamara gave Langlotz his photo collection, which included more than 20 photos McNamara took of the original rainbow flags.

In writing McNamara's obituary for his hometown newspaper, Langlotz referred to him as a co-creator of the rainbow flag. In the early 2000s he reconnected with Segerblom and suggested making a documentary about the three's involvement in creating the first rainbow flags.

Langlotz told the B.A.R. he tried to interview Baker about the first flags on videotape one time when he was in Los Angeles. But Baker became upset at his questions, recalled Langlotz, and demanded the camera be turned off.

"We didn't want to attack Gilbert or attack his identity as this gay Betsy Ross identity he had," said Langlotz. "For Gilbert, that was his baby. It was really his identity. He identified as the creator and the keeper of the flag. I would never want to take that away from him."

Four years ago, Segerblom met with LGBT historian Glenne McElhenny and agreed to be interviewed for a short documentary that McElhenny is making about the different artists who made flags for the 1978 Pride celebration. McElhenny was a volunteer who assisted with dying the fabric for the first flags.

She is seeking funds to complete the documentary - tax-deductible donations can be made online at https://www.documentary.org/film/impact-stories-californias-lgbt-history - and hopes to release it later this year. It is one of four short documentaries on LGBT topics McElhenny is making for use in California classrooms.

"Lynn and James deserve a third of the credit for creating the rainbow flag, for being behind the designs, for doing the stitching and colors, and supervising the artists who did the work," said McElhenny.

Following Baker's death last year, and unsure when the documentary would be completed, Segerblom decided to tell her side of the story about the creation of the first rainbow flags while she could do so herself. Due to knowing a Blade editor, she submitted her account to the paper.

Nicoletta said he had asked Segerblom why she was speaking out now, having remained quiet all these years until after Baker's death.

"It is a matter of, this is my narrative and I am going to talk about it while I am still alive," he said, noting that it "is not a struggle around intellectual property at all. This seems to have dropped through the cracks of history."

Nicoletta told the B.A.R. there is a way to honor the role all three of the artists played in coming up with the first rainbow flags without diminishing Baker's legacy.

"The way I like to phrase this conversation is Gilbert is the one who beat the pavement for 40 years. His influence on what the flag became is not something that should be slandered in any way, shape, or form," said Nicoletta. "There is a way to have multiple narratives on this history, and it is a healthy paradigm to have conflicting narratives."

Following the publication of Segerblom's account earlier this month, the Wikipedia entry for the rainbow flag was changed to say that it was "originally devised by" her and Baker. It includes a link to her piece.