by by Liz Highleyman 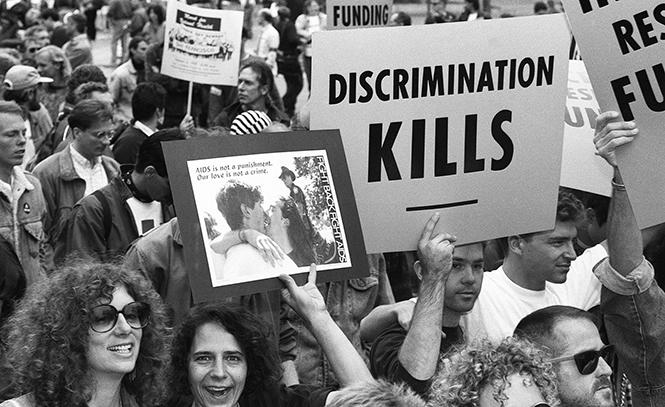 The International AIDS Society's decision to hold its next large conference in San Francisco and Oakland in July 2020 has provoked controversy at both the local and global levels.

As reported last week, Bay Area elected officials and the San Francisco AIDS Foundation applauded the decision and are eager to serve as hosts for the semiannual confab.

"The Bay Area has long been at the forefront of the AIDS epidemic," said Congresswoman Barbara Lee (D-Oakland). "While San Francisco and Oakland emerged as an early epicenter of the crisis, these cities have also been a hub for AIDS activism, research, and community support. It's fitting that with an end to AIDS on the horizon, the International AIDS Conference will return to the Bay Area for the first time in 30 years."

But many community-based organizations say San Francisco is too expensive and U.S. policies are hostile to the groups most affected by the HIV/AIDS epidemic.

"Hosting AIDS 2020 in the U.S. flies in the face of ample and undeniable evidence that the Trump administration's violation of human rights, targeting of vulnerable communities for harm, and exacerbating HIV-related stigma worldwide, coupled with drastic budget cuts, threatens the advancements we have made in the domestic and global epidemics," a group of more than 50 local, national, and international groups said in an open letter to the IAS.

Conference history
The International AIDS Conference started in 1985 as a small gathering of researchers and public health officials in Atlanta, home to the Centers for Disease Control and Prevention. It has since grown into a major conference, alternating in even-numbered years with the IAS Conference on HIV Science.

The conference took place in San Francisco at the height of the epidemic in 1990, setting the stage for a week of protests by ACT UP and other activists who felt that governments and the medical establishment were not doing enough to help people living with AIDS, which was then an often fatal disease with no effective treatments.

The 1992 conference was slated for Boston, but was moved to Amsterdam due to a U.S. policy barring HIV-positive visitors and immigrants. Former president Barack Obama lifted the ban, enabling the 2012 confab to take place in Washington, D.C. The 2014 and 2016 conferences were held in Melbourne, Australia, and Durban, South Africa, respectively, and this year's meeting will take place in Amsterdam in July.

The conference and its companion Global Village, which offers free activities for the community, is now so large that few cities have the capacity to host it. The 2020 meeting is expected to draw around 15,000 participants; the 2012 meeting in D.C. exceeded 20,000. The Moscone Center expansion now underway will provide enough space for the main conference, with the Global Village planned for Oakland.

The IAS conducts an open bidding process that begins 18 months before a decision is made, the society explained in a statement. For AIDS 2020, the organization considered more than 20 cities across the world starting in 2016, well before the election of Donald Trump. No countries in the "global South" applied to host the conference, according to the IAS.

"Many previous conference sites were chosen to directly challenge political and social norms. AIDS 2020 is no exception," the IAS said. "We believe holding AIDS 2020 in the Bay Area, a global capital of AIDS activism, will send a powerful message to all those threatening to undo the progress of the past three decades and provide support to those living with HIV and fighting to protect global AIDS funding."

Pros and cons
Those in favor of the Bay Area location point to San Francisco's leading role in addressing the epidemic, from its community-based care model in the 1980s to being the first city to offer universal early HIV treatment in 2010 to being on the forefront of same-day treatment and widespread adoption of PrEP today.

At the same time, the Bay Area reflects disparities in the epidemic, with prevention and treatment efforts lagging in Oakland, which has a much larger population of African- Americans, the group with the highest rate of new HIV infections.

"The partnership of San Francisco and Oakland hosting AIDS 2020 serves as an apt metaphor for the global effort to end HIV - working together, across political and social divides, to achieve our goal of ending this pandemic," AIDS 2020 International Chair Dr. Anton Pozniak of Chelsea and Westminster Hospital in London said in a statement announcing the location.

"AIDS 2020 will allow us to highlight the San Francisco model of care, and the incredible progress made towards ending the epidemic in the city where it began," SFAF CEO Joe Hollendoner said in a statement. "The conference will also allow San Francisco and Oakland - two cities whose success is inextricably linked - to partner together in ways we haven't historically so that we can address the health disparities that continue to perpetuate the AIDS pandemic."

Other community groups, however, think the Bay Area is a poor choice.

Some of the criticism has centered on logistics, noting that San Francisco is among the most expensive cities in the country, with a dearth of affordable lodging options. Inadequate BART service and congested traffic mean that traveling between the main conference site in San Francisco and the Global Village in the East Bay will be slow and frustrating, thus exacerbating, rather than bridging, the divide, they contend.

But the biggest source of opposition is the current U.S. political climate, which many regard as hostile to gay and bisexual men, transgender people, people of color, sex workers and people who use drugs - the key populations that bear the greatest burden of the HIV/AIDS epidemic in the United States and worldwide.

Critics point to Trump's attempts to ban immigrants from several majority Muslim countries and his crackdown on undocumented people, which has not spared the Bay Area despite (or perhaps because of) its sanctuary city policies. Lifting travel restrictions on sex workers is unlikely under this administration, and Trump has praised the Philippines for killing people who sell and use drugs.

"The hostile political context in the U.S. will make it nearly impossible for sex workers, people who use drugs, people from Muslim countries, and anyone with a criminal record (including LGBT human rights defenders) in our respective networks to enter the country and feel safe to participate in the conference," the networks stated.

The signatories expect that the political climate will likely deteriorate over the next two years.

"We anticipate that the U.S. political climate will only be worse in 2020, in the final months of a presidential election year that, like 2016, may well be marked by heightened violence, intentional promotion of stigma, and the need to mobilize to protect our communities," the groups wrote.

"IAS 2020, if held in the U.S., will only serve as a distraction during a critical period where the domestic HIV community needs to be laser focused on protecting what we have and advancing access to healthcare, the safety net, and human rights," the letter continued. "We reject the fantasy that the benefits of possibly heightened U.S. media attention to HIV issues in July 2020 outweigh the burden that hosting the IAS conference in the U.S. imposes on advocates who are fighting year-round to elevate these issues."

"The current administration, including the Department of Homeland Security and the Department of Justice, have showed trans people nothing but hostility," Chung, who's also the senior director of strategic projects at the Transgender Law Center, told the Bay Area Reporter. "To expect them to protect us is as good as asking a fox to guard your henhouse."