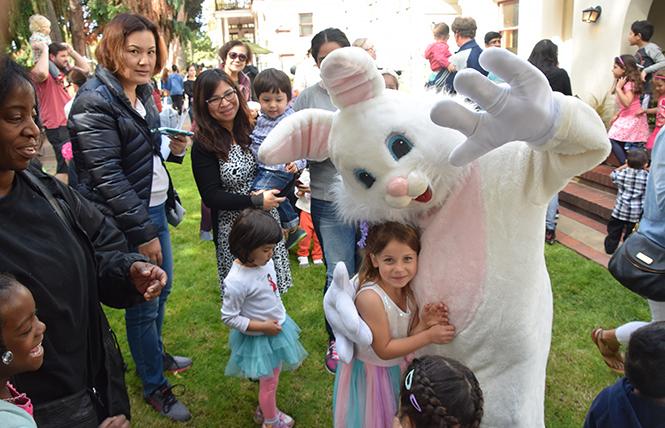 The Easter bunny will be on hand at "Egg Hunt at the Casa" in San Leandro March 31. Photo: Courtesy SLIA.

Easter events aimed at children are coming up in San Francisco and the East Bay.

All the events below are taking place Saturday, March 31.

In San Francisco, the Recreation and Park Department will hold "Eggstravaganza" from 11 a.m. to 3 p.m. at Robin Williams Meadow (formerly Sharon Meadow) in Golden Gate Park.

Elsewhere in San Francisco, the California Parks Company will hold its second annual Angel Island Spring Festival from 11:30 a.m. to 3 p.m. The day starts off with an Easter egg hunt for children in various age groups.

Adults will get their own prize in the form of complimentary beer and wine tastings, courtesy of McGrail Vineyards and Gordon Biersch, in the cafe, which will host a special "Spring Fling" menu for purchase all weekend.

People can also purchase tickets for Segway tours, rent a bike, or hike.

Attendees can be among the first to experience the new, more modern tram and new audio handsets at 11:45 a.m. and 2 p.m.

Angel Island can be accessed via ferry service from San Francisco and Tiburon. Ticket prices vary by location and age group. For more information, visit www.angelisland.com.

The San Francisco Zoo will partner with 106 KMEL's Sana G. Morning Show to host "Big Bunny's Spring Fling." There will be four egg hunts with thousands of candy-filled eggs. Participation for each hunt is limited and will reach capacity, officials said. Reservations hold your spot for 30 minutes prior to the egg hunt.

To reserve a spot, visit https://tickets.sfzoo.org.

Registration for the egg hunts does not include paid admission to the zoo, which is located at Sloat Boulevard and the Great Highway.

In the East Bay, the San Leandro Improvement Association will hold its annual "Egg Hunt at the Casa" from 10 a.m. to 2 p.m. at the historic Casa Peralta grounds in downtown San Leandro (384 West Estudillo Avenue).

"The Egg Hunt at the Casa is an event for the community to come together and enjoy family fun at the historic grounds, which will be blossoming with spring decor," SLIA President Gordon Galvan said in a news release.

SLIA staff will decorate the Casa Peralta and hide plastic eggs stuffed with goodies and sweets from Ghirardelli for the kids to find around the grounds.

Other activities will include face painting, music, and a petting zoo sponsored by Mike's Feed and Pet.

NCLR seeks ED applications
The National Center for Lesbian Rights is seeking a new executive director after longtime leader Kate Kendell announced last week that she is stepping down at the end of this year.

Kendell has led the LGBT legal organization for 22 years.

Lauren Gray, NCLR communications director, told the Bay Area Reporter that the agency will post the job description in April and that the board will take as much time as it needs to find Kendell's successor.

"NCLR's board of directors is working closely with succession planning experts and NCLR's management team to ensure a smooth transition," Gray wrote in an email.

In the March 15 statement, Kendell said, "My time at NCLR has widened my vistas and laid open my heart."

"Presentation of LGBT Rights" will feature Elizabeth McKay, the Quebec representative in California. Quebec was the first state in North America to ban discrimination based on sexual orientation in 1977.

The afternoon also includes other programs: "French-English Bilingual Education," and "Assessment of President Macron's first year," which will look at the tenure of French President Emmanuel Macron.

The royalty competition takes place at 6 p.m.; a special youth competition will be held at 11 a.m.

The competition will allow gender-neutral and drag competitors to participate in the event for the first time, organizers said.

During the pageant, the Bay Area's most talented samba, salsa, and soca dancers will compete for the titles of Carnaval King, Queen, Drag, or the new gender-neutral title, Royale. Winners will become the official ambassadors for Carnaval San Francisco 2018, leading the televised 40th annual grand parade Sunday, May 27.

"Carnaval San Francisco has always welcomed and celebrated all types of culture and diversity, and we're thrilled to expand this year's competition to include younger generations and titles for all genders and drag competitors," Roberto Hernandez, Carnaval San Francisco's executive producer, said in a news release.

Tickets to the youth competition are $5 for seniors and ages 17 and under, and $10 for adults. The adult competition tickets start at $17. To purchase tickets online, visit http://www.carnavalsanfrancisco.org/kq.

EQCA SF awards coming up
Equality California will hold its San Francisco Equality Awards Saturday, May 12, from 6 to 11 p.m. at the Westin St. Francis, 335 Powell Street.

This year's honorees include lesbian U.S. Senator Tammy Baldwin (D-Wisconsin), who became the first out member of that chamber and is facing re-election this year; Congressman Mark Takano (D-Riverside), the first and only out person of color to serve in Congress; and Bay Area icon LaVerda Allen and BART for their work to support local small businesses run by women and members of the LGBTQ community.

Tickets are $400 and can be purchased online at https://www.eqca.org/equality-awards/san-francisco/.