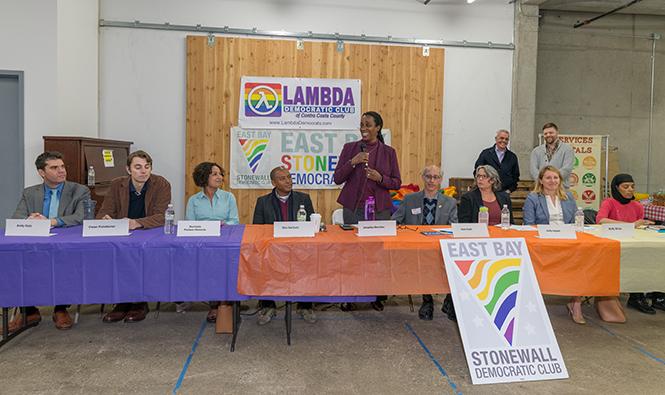 They all support California offering universal health care to its residents. They all pledge to advocate for LGBT rights in Sacramento.

Education issues rank high on their list of priorities. And all agree another top prerogative would be addressing the state's lack of affordable housing and growing ranks of homeless individuals.

There are few policy differences, in fact, between the candidates running for the open 15th Assembly District seat, which stretches from Richmond south into parts of Oakland. The incumbent, Assemblyman Tony Thurmond (D-Richmond), is running to be the state's superintendent of public instruction after serving two two-year terms in the Legislature.

The East Bay contest is the only competitive legislative race in the Bay Area with out candidates this election year. Heading into the June primary, where the top two voter-getters will advance to the November election, any of the leading candidates has a chance of winning the seat.

The lack of contrasting positions between the candidates was on display at a forum with nine of them co-hosted by the Lambda Democratic Club of Contra Costa County and the East Bay Stonewall Democratic Club, which covers Alameda County. The February 21 event drew close to 50 people.

"This is the first time we have had three queer out candidates running to represent our community," said Lambda club co-founder and president Cesar Zepeda, who is running for a second time this fall for a seat on the Richmond City Council. "Whether it is one of the LGBT candidates or a straight alley who wins, our aim is that they represent us correctly when they get up to the Assembly."

For voters, who they decide to back in the race likely will come down to personal relationships and affinities for the backgrounds of the various candidates.

At the forum, lesbian Richmond City Councilwoman Jovanka Beckles recalled the anti-gay insults she endured when she first joined the council. She stood up to the taunts, she said, in order to inspire and encourage LGBT youth and older people still living in the closet.

"We need a voice to represent all of the people," she said.

Lesbian Berkeley school board member Judy Appel pointed to her work tackling homeless issues in San Francisco and later pushing for LGBT rights as the former longtime executive director of Our Family Coalition, a group for LGBT parents and their children.

"I am the education candidate in this race," said Appel, who has two children with her wife.

Bisexual East Bay Municipal Utility District board member Andy Katz, who is vying a second time for the Assembly seat, pointed to his experience lobbying state lawmakers in the past on myriad public health issues.

"We need a champion for progressive values and someone who will take on workers' rights," said Katz, a Berkeley resident who is a worker rights attorney.

Former Obama administration staffer Buffy Wicks, noting that is her real name, spoke about growing up in a rural area of the Sierra Nevada with a gay brother and later watching friends struggle with HIV prior to the introduction of effective medicines.

"I think we can fix the housing crisis and get health care for all," said Wicks, a married mother of a newborn who lives in Oakland.

Thurmond recently endorsed El Cerrito City Councilwoman Rochelle Pardue-Okimoto to succeed him in the Legislature. She grew up with a mom who struggled with addiction and to make ends meet. A nurse, she now has two sons of her own.

"I will bring my 17 years of experience as a bedside nurse and labor activist to the table," she said.

Berkeley City Councilman Ben Bartlett once owned a local cafe with his father, a former Black Panther member, in the city's downtown. He also lived in Los Angeles for a time and worked as an organizer in the city's black community.

"We are all in this together. We as African-Americans, we need you to stand with us now," he said.

Two-term Oakland City Councilman Dan Kalb pointed to his 35 years of public policy work, including nearly a decade drafting legislation in Sacramento as the state policy director with the Union of Concerned Scientists.

"I know how to get things done in Sacramento," he said.

Journalist and blogger Owen Poindexter, who lives in Berkeley with his wife and son, is a proponent of adopting a universal basic income.

"We have folks working two to three jobs to stay in their homes who can't afford health care," he said. "We have the resources. We can solve this."

Cheryl Sudduth, a mother of two sons and a daughter, is a disability rights activist and contracting consultant who formerly worked for Goodwill Industries.

"I fight for social justice for everyone," said Sudduth, a Muslim who previously ran for Congress.

Toward the end of the forum, one major difference did emerge among the candidates. While nearly all said they had first voted for Bernie Sanders in the 2016 Democratic presidential primary, and then for Hillary Clinton against Donald Trump that November, Beckles disclosed she had voted for Green Party candidate Jill Stein in the fall.

It drew audible gasps from the crowd, with Beckles defending her decision because, "in California, we get to vote our conscience. Hillary did a lot of damage to the black community, which was not OK with me."

Wicks, having run her campaign in the state, was the only person to say she voted for Clinton in both the primary and general election. Sudduth would only disclose that she didn't vote for Trump, while Appel had already left the forum prior to the question being asked in order to make it to her school board meeting that night.

The Stonewall club will vote on its endorsement in the race Wednesday, March 21. Lambda members will decide their endorsement April 25. In order to secure both clubs' endorsement, a candidate needs 60 percent of the vote.