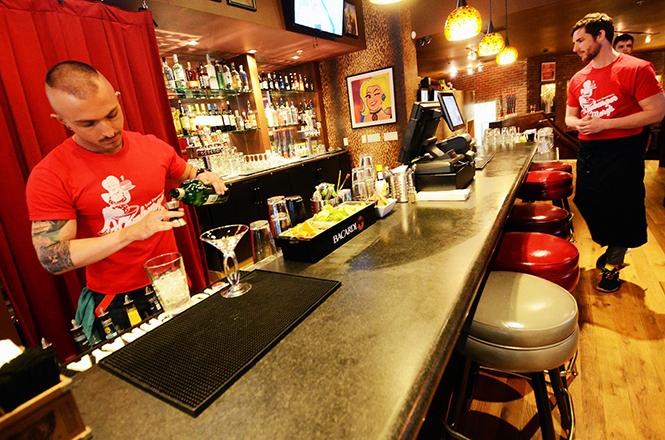 It was a day many thought wouldn't come, with some joking they were on the lookout for flying pigs Sunday night, as the long promised Castro location of Hamburger Mary's quietly opened to the public.

After several nights of training for its waiters, bartenders, and kitchen staff with invited customers from the city's gay district and LGBT community, the restaurant began serving a limited dinner menu on March 11 with seating only in the front bar area.

The location's covered patio space in the back is not yet ready to be used. The restaurant expects to open it up within a month, at which time it will also expand its food offerings and start hosting drag shows and other entertainment.

"When the back room opens, we will do more of a big opening party," said gay bar owner Larry Metzger of the Mix as he welcomed some of the first customers back into the space during one of the sneak previews last Friday night.

Metzger has no ownership stake in the local Hamburger Mary's franchise. But for the last five years Metzger has been helping owner Les Natali in his efforts to open a restaurant at 531 Castro Street. The space has sat dormant for nearly two decades as Natali encountered numerous zoning issues in first trying to reopen the former Patio restaurant, which shuttered in 2002, and later a Hamburger Mary's.

As the Bay Area Reporter has previously reported, Natali had planned to reopen the Patio in May 2012. But a routine health department inquiry related to his request for an occupancy permit led to a determination that his planning permits were not in order.

It would be the first of several permit problems Natali would have with city planning officials, leading to years of delays and a legal fight. In the midst of the zoning snafus Natali was hit with allegations of discriminatory business practices at his 18th Street gay bar Badlands. He refuted the charges and reached a mediated settlement with his accusers in 2006.

But the issue led to a complaint being filed against his permits for the Patio, which further delayed the remodel project. Eventually the city's former zoning administrator ruled in his favor, and work on the space again commenced.

Starting in 2008, Natali began searching for a person or group to run the restaurant. By 2013, he and Metzger had begun planning the Patio's re-opening ceremonies. Permit issues, however, again hampered their efforts.

By the following year the city's planning commission had signed off on the permits Natali needed to operate a Hamburger Mary's in the space. Yet nothing happened until last year, when the San Francisco Entertainment Commission voted unanimously to approve a permit that cleared the way for Hamburger Mary's to open and bring to the Castro drag shows and other entertainment.

Eight months later the restaurant finally opened its doors to paying customers. It is the 20th Hamburger Mary's location, according to the company's website. The restaurant chain was founded in San Francisco in 1972; the former South of Market location closed in 2001.

Natali did not respond to a request for comment. Metzger told the B.A.R. he believes the neighborhood will embrace the restaurant now that it is finally open.

"I think it is going to be fantastic," he said. "Everyone who has been in so far has enjoyed the food and themselves."

TJ Bruce, a managing partner in the restaurant who owns gay bars in San Jose, Sacramento, Reno, and Fresno, told the B.A.R. that he, too, is optimistic that the location will be successful.

"It was a big learning curve for all of us," said Bruce, who maintains an apartment in the Castro.

Once the patio space is ready, the restaurant will open for brunch on the weekends. Like the chain's other locations, the local Hamburger Mary's will be raising money for charities, said Dale Warner, the owner of the Long Beach and West Hollywood locations. He has been in town to help train the San Francisco staff.

As for the property's history keeping people away, Warner didn't believe it would.

"I don't think so," he said. "Everyone is excited. I think it will be a great partner for the community."

Leandro Gonzales, the reigning emperor of the local Imperial Court, stopped by last Friday to try out the restaurant with friends. He told the B.A.R. he is a fan of the chain's southern California locations and that he was excited to see the long empty storefront be revitalized.

If Natali does support the local community, Gonzales said the restaurant would likely be embraced.

"If he makes it a community space that is giving back to charity, then people will be more open to coming here because of the history," he said.

Hired to be a "drag liaison" for the restaurant, drag queen Carnie Asada joked it makes sense for her to be working at the restaurant as she brings "beef for beef." She said it was about time there was a space built specifically for hosting drag shows in the heart of the Castro.

"I think Hamburger Mary's has a great reputation across the country," said Asada, whose given name is Doran Rivera. "I live down the street. Creating jobs for people in the Castro is a big deal."

The restaurant already has hired 25 people and is looking to bring on at least another 10 employees in order to expand its hours. Hamburger Mary's will be open at 4 p.m. seven days a week and its bar will close at 2 a.m. Dinner service will end at 10 p.m. Sundays through Thursdays and at 11 p.m. Fridays and Saturdays.