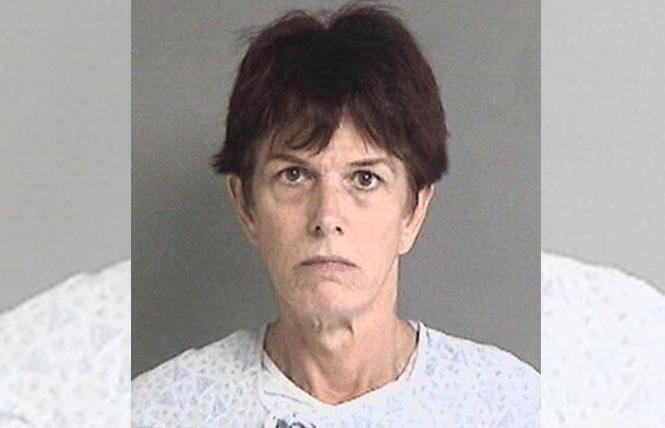 Police testifying at a hearing for a transgender woman accused of brutally murdering an Oakland family in 2016 described this week how she'd been at the family's burning home wearing bloody clothes and reeking of gasoline.

Dana Rivers, 63, who's in custody in Santa Rita Jail, has been charged with three counts of murder in the deaths of Patricia A. Wright, Charlotte Kuulei Reed, and Benny Wright. All had gunshot wounds.

At Rivers' preliminary hearing Tuesday in Alameda County Superior Court, neighbor Thai Ly, who lived across the street at the time of the November 11, 2016 killings, said he'd almost fallen asleep at about midnight when he was awakened by three to four gunshots. He looked out a window and saw a shirtless man walking in the street.

"He was almost like a drunk man, just barely wobbling," said Ly. "All of a sudden, he just collapsed." The man was later identified as Benny Wright.

Ly called 911, and responding Oakland police Officer Yusef Ghazi said that just after he arrived at the scene, he heard a "loud boom" come from inside the garage of 9413 Dunbar Drive.

Seconds later, he saw Rivers walking out of the home's front door, wearing a black motorcycle helmet, a black leather jacket and vest, blue jeans, and blue rubber gloves. Her gloves and jeans were covered "with what appeared to be blood," said Ghazi.

He said that Rivers told him that she was there to fix a gas leak on a friend's motorcycle, and that the friend had closed the door behind her. (A motorcycle was in front of the house.)

Video from Ghazi's body-warn camera was played in court. Ghazi can be heard yelling at Rivers to put her hands up as she walks out of the house taking off her helmet, then raising her hands in the air and talking to him. She then complied with his orders to lie on the ground, where she was placed in handcuffs.

Rivers can be heard saying there's a fire, and the video shows smoke coming from the garage door. Someone in the video said that Rivers had just told police she knew she was in trouble.

When Ghazi and other police went inside the townhome to check for the two other people that Rivers had said were still inside, they found the bodies of Reed and Patricia Wright in an upstairs bedroom. They also found two guns in the home.

Officer Sydney Kofford testified that she searched Rivers and found .38 caliber bullets, two knives, brass knuckles, a screwdriver with what she believed to be blood on the handle, keys, two cellphones, and cash. The bullets appeared to match one of the guns found inside the home. When she spoke with Rivers outside the home, Rivers indicated that the two people inside were dead.

Kofford testified that when Rivers was taken to a hospital, where she got stitches for a cut on her finger, staff there had her shower before they would treat her because the smell of gasoline was so strong. The officer also said that Rivers told police that she had mental health issues.

Maria Sabatini, who at the time of the killings was an Oakland Fire Department investigator, said that she'd determined the fire in the garage had been intentionally set and there had been a can of gasoline in the garage. Officials didn't indicate there was any fire damage to the house beyond the garage.

Defense attorneys Timothy Rien and Melissa Adams on Tuesday suggested another suspect may have escaped police notice as officers responded to the scene.

"I didn't know the confines of what was going on," but "she was involved in a motorcycle gang," Campbell-Wright said at the time.

Outside the courtroom Tuesday, Campbell-Wright, 21, said that he doesn't know how Rivers knew his family, and he had "no idea" what the motive in the killings may have been.

However, he's sure the killings were premeditated, because "Ms. Rivers didn't stay at my home. ... There's no way she was supposed to be there at that time of night."

He said that he'd once had "a brief conversation" with Rivers a few months before the killings, after his stepmother introduced her to him.

"I just want justice for my family," said Campbell-Wright, who now lives in Los Angeles. He'd been at school in Mississippi when the killings occurred.

The preliminary hearing was set to continue Wednesday morning. At the end of the hearing, the judge is expected to determine whether there's sufficient evidence to hold Rivers to stand trial.

Rivers made headlines in the 1990s when she transitioned while working as a teacher at a Sacramento-area school.

Along with the murder charges, Rivers also faces counts of arson of an inhabited structure and possession of metal knuckles, and special allegations including using a knife and a firearm.