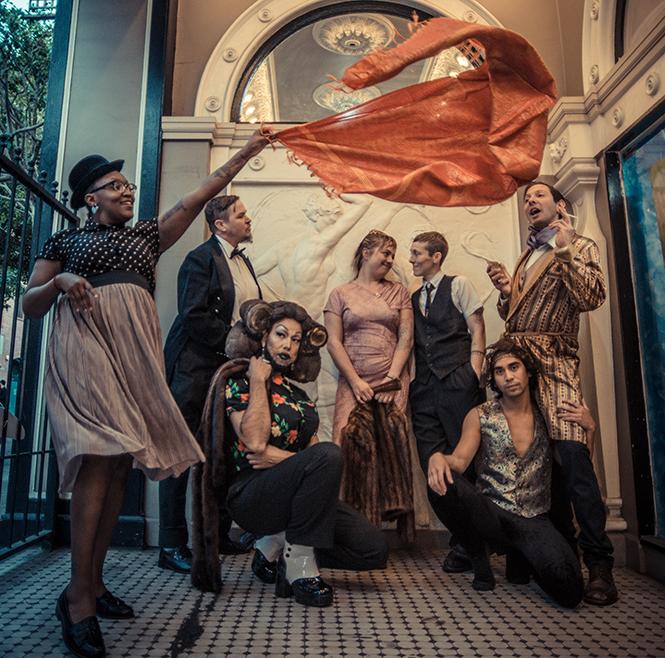 There are many stories throughout the last century of LGBTQ history that haven't been told and remain buried deep in the archives of an old library or museum. This spring, Out of Site, a performance event and walking tour, will bring that history to life.

Throughout neighborhoods and streets of North Beach on March 10-11 and 24-25, and in the Tenderloin on May 12-13 and 26-27, a team of performers will unearth the obscure, unrecognized stories of San Francisco in a time when the LGBTQ community experienced social and political oppression.

"The histories that tend to be revealed are of middle-class, gay, white men," said Seth Eisen, founder and artistic director of Eye Zen Presents, the theater company behind Out of Site. "There are very few books about the histories of women, trans people, and queer people of color. These are really the stories I want to push forward."

Eisen lit up as he talked about the variety of Out of Site performances. Inspired by the national 2016 LGBT Historic Context Statement that was funded by the National Parks Service, which explores the way LGBTQ histories have shaped the fabric of San Francisco's culture, each performance has been heavily researched for accuracy.

The performances focus on specific LGBTQ figures, places, and significant cultural moments. Each of the tours will stop at four to six locations, where audiences will experience site-specific performances that are as entertaining as they are valuable with theater, dance, puppetry, live music, and lots of interaction with the audience, Eisen said.

Lisa Evans, an Out of Site performer who identifies as a nonbinary black femme, plays Gladys Bentley in one of the acts. Bentley, a black lesbian blues singer of the Harlem Renaissance, performed at many gay bars throughout San Francisco in the 1940s. Bentley was openly gay and dressed in men's clothing during a time when many lesbians hid their identity.

Evans takes great pride in their performances and said the importance of Out of Site revolves around telling stories of underrepresented LGBTQ figures, but also acknowledging the parallels of today's LGBTQ community with the stories of the past.

"We want to express how this history meshes with today," they said. "The stories, yes, are grounded in historical context, but are also acknowledging who we are now and giving light to who we are now."

One of the bars Bentley performed at was Mona's Club 440. Started by Mona Sargent Hood and her then-husband, Jimmie, the bar is credited as being the first openly lesbian bar in the nation, having first opened in 1936 in a different location. It was a haven for many gay, lesbian and queer people of the time in North Beach.

Sargent Hood is another character represented in the walking tour.

The former locations of Finocchio's, Black Cat Bar, and Tommy's Place are other gay bars that are a part of the walking tour.

Stories of Jose Sarria, played by Bay Area drag queen Landa Lakes, will be included, along with representations of the two-spirit community. Many Native Americans came to the Tenderloin district due to the Indian Relocation Act of the 1950s.

The Bay Area literary and arts communities will also be part of the walking tour, with representations of Charles Warren Stoddard, who wrote homoerotic novels in the late 19th century; Madeline Gleason, a poet of the Beat Generation; and Marcel Duchamp, a French-American painter and sculptor associated with Dada and Expressionism who had a drag persona.

A year in the making, Out of Site was created in collaboration with walking tour company Shaping San Francisco and funded by the Creative Work Fund, Kenneth Rainin Foundation, and Zellerbach Family Foundation.

Writers include Eisen and James Metzger and the assistant director is Natalie Greene. The performances for both parts happen Saturdays at noon and 4 p.m. and Sundays at 2 p.m. Tickets are $15-$40 and can be purchased at http://www.eyezen.org/out-of-site/.