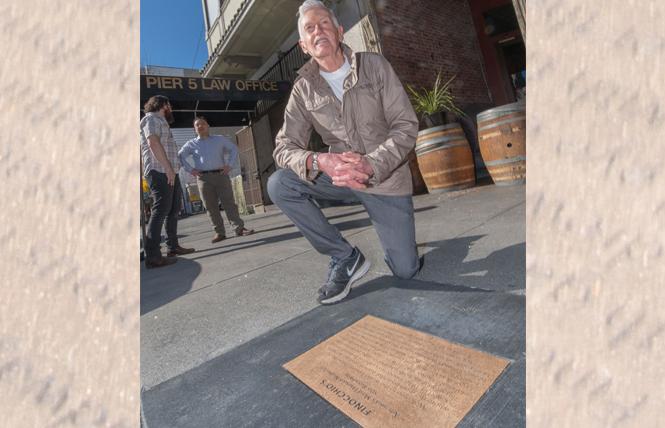 Sean Martinfield, who once served as master of ceremonies at Finocchio's, looks at the historical plaque unveiled February 16 outside the former female impersonators cabaret in North Beach. Photo: Jane Philomen Cleland

For several months in 1984 Sean Martinfield served as the master of ceremonies at the famed Finocchio's female impersonators cabaret in North Beach. He would introduce his fellow cabaret acts, help the performers with their costume changes, and oversee the lighting effects.

Martinfield, 69, a native San Franciscan, would also sing his own set dressed up as the female chanteuse Pat O'Shea. It was the stage name his mother had performed under as a cabaret singer in Oregon.

"It was difficult and very, very challenging," recalled Martinfield of the job, which he had to relinquish in August of that year when he had a tonsillectomy. "We did four shows a night, and then in the morning I would race to the Sunset to the church where I was a cantor and do two masses in a row."

The cabaret club's last curtain call came in 1999 when it closed its doors. Last Friday, February 16, Martinfield and his partner of 32 years, Tom Crites, were back outside 506 Broadway to inspect a new historical marker embedded in the sidewalk in front of the building.

It alerts passersby who take the time to read its script that the elaborate shows put on by Finocchio's gay and straight performers "drew in sailors and tourists alike, as well as the watchful eye of law enforcement." Today, the second floor space the club had occupied is home to Pier 5 Law Offices, including that of high-profile attorney J. Tony Serra.

"The plaque is great. How else will people know of it?" said Martinfield. "It has to be memorialized."

Crites, who declined to give his age but did say he moved to San Francisco in 1968, never set foot into Finnochio's as he served in the military and doing so "would have been a big mistake." Nonetheless, he too told the Bay Area Reporter he was glad to see that piece of the city's LGBT history be memorialized.

"I am very happy it is getting the recognition it deserves and that we are getting recognition as the older generation that lived through this. It is an incredible thing they are doing," said Crites.

The Top of Broadway Community Benefit District last week unveiled 10 bronze street plaques commemorating historical locations in the city's Italian neighborhood. The 17-inch by 12-inch sidewalk markers can also be found at the site of two other long-gone lesbian bars that had operated in the area decades ago.

Nearby Finnochio's, at 440 Broadway, is a plaque commemorating where Mona's Club 440 had operated. Started by Mona Sargent Hood and her then-husband, Jimmie, the bar is credited as being the first openly lesbian bar in the nation, having first opened in 1936 in a different location.

It was known as the place "where girls will be boys" due to the women performers who dressed as men and entertained patrons. Mona's popularity spiked during World War II, and in 1948, the bar was renamed as Ann's 440 Club. Comedians Lenny Bruce and singer Johnny Mathis launched their careers there; today it is home to the Cosmo bar and lounge.

The other lesbian bar once operated at 12 Saroyan Place, formerly Adler Street, in the 1950s. Proprietor Eleanor "Tommy" Vasu is believed to be the first known lesbian to legally own a bar in San Francisco. She was forced to shutter the two lesbian bars she owned in North Beach amid a citywide crackdown on gay nightlife establishments in 1954.

In 1968 it became Spec's 12 Adler Museum Cafe, a family-owned union bar run by Richard "Specs" Simmons. His daughter Elly Simmons, who is making a documentary about her father, was on hand for the unveiling ceremony for the historical markers.

Also in attendance was Jerry Cimino, the owner of the Beat Museum who chairs the CBD's District Identity & Streetscape Improvement Committee. He assisted with the historical markets project, paid for through a $30,000 Community Challenge Grant the CBD won from the city four years ago.

Other sites included in the Top of Broadway CBD Historical Marker Walking Tour include 473 Broadway, home of the noted club the Jazz Workshop in the 1950s and '60s, and 1033 Kearny Street, where the Lusty Lady for decades screened adult films and later live peep shows until it closed in 2013.

"This is not just where topless bars began or where the Beat generation got its roots, it is also where the LGBT community started here in the city," said District 3 Supervisor Aaron Peskin, who represents the neighborhood at City Hall and won city approval for the plaque project. "This is a walking tour through the history of San Francisco."

The CBD is looking to apply for additional funding to install more historic markers in the area. A map with information on the inaugural group of 10 markers can be picked up at the Beat Museum, 540 Broadway, or in the lobby of the Green Tortoise Hostel at 494 Broadway.

For more information on the North Beach plaque project, visit the CBD's website at http://www.topofbroadwaycbd.org/historical-marker-project/.