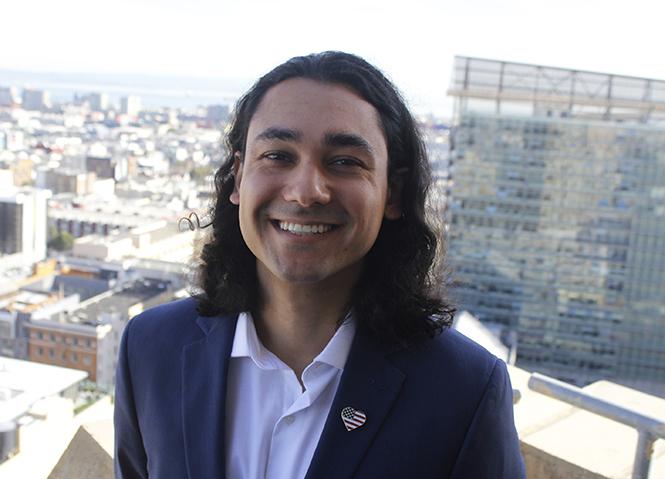 He won't turn the required age to be a member of the House of Representatives, 25, until four days before the November 6 election. And amid campaigning he is also focused on earning a law degree from UC Hastings College of the Law.

Ryan A. Khojasteh, in his first bid for elected office, is under no illusions about the uphill climb he faces to win California's 12th District House seat. After all, he is challenging Democratic leader Nancy Pelosi (D-San Francisco), 77, for the seat she has held since 1987 and is expected to easily win re-election to this year.

For now, his focus is on surviving the June 5 primary race, where the top two vote-getters regardless of party affiliation will advance to the general election in the fall. Fellow Democrat Stephen Jaffe and Green Party member Barry Hermanson are also running.

"Some people may be hesitant to vote for me because of my age," Khojasteh acknowledged during an interview with the Bay Area Reporter at Flore cafe in the Castro district. "But if I make it through June, I would be the youngest person in history to challenge a sitting member of Congress."

Rather than wait to run after graduating law school this December and establishing his career, Khojasteh said he was inspired to enter this year's race by the late gay San Francisco supervisor Harvey Milk. Prior to his historic victory in 1977 as the city's and state's first openly gay elected official, Milk had mounted several previously unsuccessful campaigns despite opposition to his doing so from LGBT community leaders.

"He didn't get permission from anyone to run for office," said Khojasteh, who is straight but connected with Milk's story when he saw the Oscar-winning movie about him starring Sean Penn.

His parents are from Iran. His father left the country right before the 1979 hostage crisis and worked odd jobs in Louisiana in order to bring his wife to the U.S. Two decades ago, his parents moved to Campbell where they raised Khojasteh and his younger sister and now own a Subway franchise. It wasn't until after the 9/11 terrorist attack that the family experienced discrimination because of their ancestry.

"Being different in school, I developed a heightened sense of awareness and dedicated my life to fighting for equality. People should have voices," said Khojasteh. "Harvey Milk did. He wanted people to say, 'I am proud of my background and who I am.' It is what I hope to do in his honor and legacy."

Khojasteh, who earned a B.S. in political science from Santa Clara University, serves on the San Francisco Immigrant Rights Commission. He is also on the board of the San Francisco Young Democrats and is a member of the Harvey Milk LGBTQ Democratic Club.

He plans to make his presence known this weekend when the state Democratic Party holds its convention in San Diego. His campaign will have a booth in the convention hall as he seeks to raise his profile among party members and activists.

Should he advance past the June primary, Khojasteh hopes his candidacy, and the fact he is the son of Iranian immigrants, will attract national attention. He wants to serve as a role model for other youth, people of color, and immigrants who feel neglected by the government.

"If we try we can do incredible things," said Khojasteh, who opened his local campaign headquarters last weekend. "There are so many people in the country with immigrant backgrounds or who are young and don't feel like they have a seat at the table."

The progressive political group's members voted Tuesday to support both District 6 Supervisor Jane Kim and gay former supervisor and state lawmaker Mark Leno in the race. Leno, who is aiming to become the city's first openly gay mayor, also picked up a sole endorsement Wednesday from the Gay and Lesbian Victory Fund, a national group focused on electing LGBT candidates.

The endorsement by the Milk club was unranked. Under the city's instant-voting runoff system, voters can rank up to three candidates for mayor. As the candidates with the least amount of votes are eliminated, their voters' second and third choices are then tabulated until one candidate emerges with 50 percent plus one of the vote.

The city's more moderate Alice B. Toklas LGBT Democratic Club is considering doing its own unranked dual endorsement of Leno and Board of Supervisors President London Breed, who had served as acting mayor upon the unexpected death December 12 of the late mayor Ed Lee. The club's members are expected to vote on the endorsement in March.

Sheehy kicks supervisor campaign into high gear
While he has been holding fundraising events for months, District 8 Supervisor Jeff Sheehy will publicly launch his campaign to maintain his seat on the San Francisco Board of Supervisors this weekend.

Sheehy, the lone gay member on the board and the first known supervisor to be HIV positive, was appointed to the seat last year by Lee to fill the vacancy created by Scott Wiener's election to the state Senate. He is facing a strong challenge from gay attorney Rafael Mandelman, who serves on the City College of San Francisco board and lost to Wiener in the 2010 supervisor race.

Wiener and Mayor Mark Farrell will join Sheehy for the opening of his campaign headquarters at 10 a.m. Sunday, February 25, at 541 Castro Street. The vacant retail space is owned by Castro bar owner Les Natali and is next door to the long-vacant Patio restaurant space, which Natali also owns and is working to reopen as a Hamburger Mary's.

Asked about renting from the controversial landlord, Sheehy told the B.A.R. he has no qualms about activating a vacant storefront in the heart of the Castro for the next nine months. Sheehy and Mandelman are running on the June ballot to serve out the remainder of Wiener's supervisor term through early 2019 and are both expected to run in November for a full, four-year term on the board.

"If we can reduce the number of empty storefronts in the Castro, that is a good thing," said Sheehy, a married father who lives in Glen Park.

Mandelman, a resident near the Valencia corridor, has his campaign office on 24th Street in Noe Valley. He will also be holding an event in the Castro this weekend to promote his candidacy.

His campaign is organizing an LGBTQ mobilization in the neighborhood and has asked supporters to gather at 10 a.m. Saturday, February 24, in Jane Warner Plaza at the intersection of 17th, Castro and Market streets.