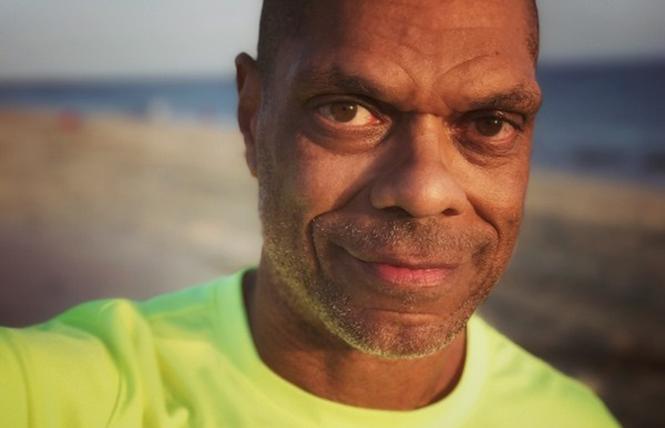 With his recent vulgar ranting about "shithole countries" vis-à-vis immigration, President Donald Trump has once again been accused of being a racist, which makes Randy Boyd's new e-book, "The Essential Randy Boyd, Volume 1" the perfect opportunity to discuss race relations in the LGBTQ community.

Best known for his fantastical, 700-page opus, "Walt Loves the Bearcat," which netted him one of his five Lambda Literary Award nominations, as well as his blog posts on http://www.RandyBoydsBlocks.com during a 30-year writing career, the black, gay, HIV-positive author decided that he wanted to give readers the opportunity to sample some of his most important works (essays, fiction) in a short, accessible volume - "almost like a greatest hits album," he said - that best defined him and his experiences.

An opportunity to walk in his shoes, "to go on a unique walk with me," he said.

"Before my sexual orientation and HIV status, people are constantly reacting to, and reminding me of, my skin color, so yeah, dealing with racism through writing has been essential, pun intended," he added.

Two poignant memoir reminisces include his unrequited affection for the white quarterback on his freshmen high school football team and how he helped rescue an elderly white man whose car had broken down in the middle of ground zero of the 1992 Rodney King riots in Los Angeles, at potentially great risk to himself.

Boyd, 56, answered questions with the Bay Area Reporter through an email interview.

With the 50th anniversary of Martin Luther King Jr.'s assassination coming up in April and Trump's recent incendiary remark, Boyd commented on where the country is on race relations.

"The battle for the soul of America continues," he wrote in the email. "We still have a long way to go before we realize the ultimate idea that all people are created equal, and therefore deserve an equal shot at life, liberty, and the pursuit of happiness. Are we a country for rich, white supremacists or a melting pot for all? It seems to me that has been the question ever since the white, land-owning forefathers of this country established a Constitution that preferred their interests over all others.

"Every step forward seems to ignite a backlash," he continued. "Trumpism is the selfish and/or ignorant (mostly) white man's reaction to globalization and a successful President Obama. It's vital we keep Dr. King's dream alive."

Throughout his writings, Boyd deals with aspects about being black, gay, and HIV-positive. He was asked about which of the three identities has been the most difficult for him to deal with.

"The hardest part is knowing that I'm a triple threat to people's assumptions and perceptions, that people are going to put me in three different, very confining boxes, none of which completely defines me," he wrote. "However, being HIV-positive is definitely the most difficult. More and more people are exposed to, and accepting of, black and gay people, but people living with HIV/AIDS are the most feared, the least understood, and the least cared about of the bunch. Even as it's become less socially acceptable for gay men to state their racial prejudices on online dating sites, there still appears to be no stigma in saying one is 'clean,' which implies people with HIV are 'dirty.'"

"It should not be socially acceptable to use words like 'clean' when describing someone who is HIV-negative," he wrote. "It would also help if gay people today understood more about what gay people with HIV/AIDS had to endure during the AIDS panic. In some ways, longtime survivors are like Holocaust survivors or veterans of a war. Have some sensitivity to our plight, for goodness sake."

In one devastating blog post, Boyd recalled what it was like being called the N-word by a group of white Sigma Chi fraternity brothers the week before starting the University of Southern California in 1980. At the time he didn't report it. He would do things differently today.

"I would have written an article describing that gut-wrenching experience and submitted it to the school paper, the L.A. Times (since we were in L.A.), the school president, and the dean of students," he wrote in the email. "I would also let someone like the NAACP know about it. I would definitely not be silent about the fact that a black boy and his black friends were called 'nigger' by an all-mighty white fraternity a week before the start of my freshman year at USC. I would let them all know how hurt I was and how it became a major reason I eventually transferred to, and graduated from, UCLA."

Magic's big impact
When basketball legend Magic Johnson announced in 1991 that he was HIV-positive, it had a big impact on Boyd's life.

"Ten months before his announcement, I came out to friends and co-workers with my own HIV announcement," he wrote. "Many of them disappeared from my life until calling to ask me how I felt about Magic Johnson (but not how I was feeling). And it really hurt, seeing my mother wondering why another mother's son was getting so much attention and compassion while her son wasn't. In my essay, I was also questioning his need to adamantly assert his heterosexuality, which was met with applause by a talk show audience and praise by a longtime Lakers announcer. It was as if all was OK, because even though he had HIV, he wasn't gay."

The common perception is that gay men are less racist, having known prejudice themselves, yet Boyd argues against this notion, which he sees as idealistic and wishful thinking.

"Knowing what it's like being discriminated against based on sexual orientation doesn't erase a person's racial biases," he pointed out. "Heck, even racial minorities can be racists. Gay folk have received the same cultural cues we all have about a black person being worth less in our society."

Boyd thinks that racism in the LGBTQ community needs to be confronted individually.

With all these heavy topics, Boyd also has a charming chapter on how his dogs (Clancy as a child; Boomer as an adult) have helped him deal with the stresses and disappointments in his life. He thinks gay men grow attached to their dogs because of unconditional love and companionship.

"A dog could care less about your sexual orientation," Boyd wrote in the email. "He or she just wants your love and affection, and a lot of treats! Unconditional love is probably something a gay person can appreciate on a vastly different level than a non-gay person. Perhaps that makes dogs lovable to us."

Based on his own experiences, Boyd said the community needs to continue resisting Trump.

"I take comfort that this is like a bad storm and we must weather it," he wrote. "Trumpism is not the end of the world. It's something we have to resist and fight against, but it's also something we can survive. In the mid-1980s I attended the Hay Rides, weekly support meetings ran by the (late) self-help guru Louise Hay in West Hollywood. The gym would be filled with hundreds of men and women dealing with AIDS. One sentiment she shared has always resonated with me: 'Whatever you're going through, every bad day, every bad crisis, every seemingly insurmountable problem, you've always found a way to get through it and keep going.' That's what we have to remember about this fervent, racist, selfish, and conservative backlash trying to consume our country at the present time. We will survive this and keep going."

Randy Boyd's new book can be purchased at http://www.amazon.com.