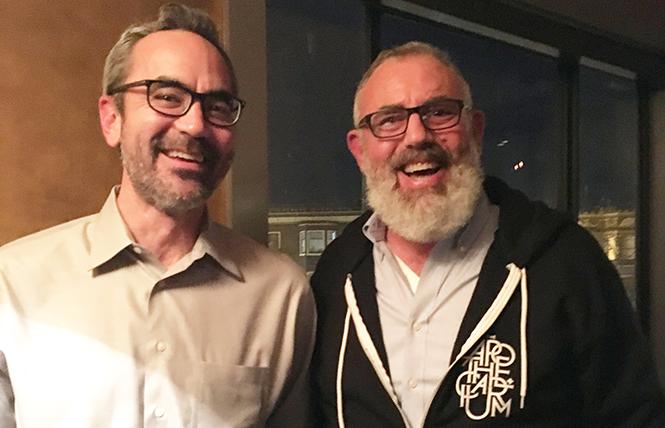 With numerous commercial vacancies in the Castro, neighborhood activists urged one of the city's largest real estate firms to make more of an effort to fill the empty storefronts on the Church Street corridor.

At a gathering January 31, held in the upstairs meeting room of Churchill bar at 198 Church Street, more than three dozen residents and business owners urged the management team at Veritas Investments to fill the vacant storefronts in the neighborhood.

The Castro and Upper Market business district has a vacancy rate of 12 to 15 percent, Mark McHale, an EVNA board member, told the San Francisco Chronicle.

Daniel Bergerac, president of the Castro Merchants, ticked off a list of businesses that have left the neighborhood, including Chilango, Sparky's, Crepevine, Snowbrite, and Church Street Flowers. One business, Photoworks, moved several blocks away.

These businesses all have one thing in common, said Bergerac, a gay man who is co-owner of Mudpuppy's Tub & Scrub. They all previously occupied a space owned or managed by Veritas.

"And the rumor on the street," said Bergerac, is that Veritas is difficult to work with.

Bergerac said that Veritas tenants have complained that the giant real estate investment firm has required business tenants to sign 35-page leases, which can cost a business $7,000 in legal fees for review by an attorney.

"That's a lot of money to a small business," said Bergerac.

The need to fill the many vacancies is greater than ever, said Zephyr Realtor Danny Yadegar, who was the consultant on the 2014 Castro retail strategy report, sponsored by the CBD. When the report was issued the Castro had a commercial vacancy rate five times higher than comparable neighborhoods, said Yadegar, a number that has increased since then.

Justin Sato, chief operating officer of Veritas Investments, defended his firm, describing it as a "San Francisco-based company" with 99 percent of its business in the city.

"We do want to partner with neighborhood groups and merchants," said Sato, claiming that the company has done so successfully in other neighborhoods, including the Geary-Leavenworth corridor in the Tenderloin.

"We want to be transparent" about our plans, he said.

Sato said Veritas "has made some progress" in filling empty retail spaces but hasn't communicated the news.

Coming soon to 235 Church (formerly Chilango, which closed in 2015) will be Il Corsaro, the second location of a pizzeria now in North Beach, said Sato. There will also be a "mom and pop" fitness business as well as a real estate company, Compass, both of which should drive foot traffic in the neighborhood, he said.

Sato said some of the empty spaces were a result of soft-story retrofitting remodels that wound up taking much longer than anticipated. Veritas' strategy is to "create spaces that are easy to activate" for new business tenants, a "plug and play" approach, he said.

The space at 242 Church Street, formerly occupied by Sparky's, has been "challenging" to rent, Sato said. The space was in "desperate need of repairs" but following an aggressive marketing campaign, there are now two businesses "very, very interested" in the space, he said, declining to name them.

Sato said Veritas would consider donating space to a nonprofit organization that would be a "good fit" for the neighborhood and would also consider short-term leases.

"We want to work with you," he said. "We are not looking for the most money."

Sato said Veritas is planning to increase the security patrols that now monitor the empty spaces in the neighborhood.

"We understand the challenges" with people who are homeless camping out in front of unoccupied storefronts, he said.

Some of the attendees at the meeting did not warm up to the Veritas progress report, asking whether it benefitted from tax write-offs from the losses from empty spaces.
"Absolutely not," said Sato. "We get zero" benefit from an empty space.

"I've licked the envelope six times," Magary said, referring to mailing the company promotional materials. Sato agreed to join and attend future meetings, although nobody from Veritas was at the merchants' meeting the following day.

Mandelman thought the session was a step in the right direction.

In an email to the Bay Area Reporter, Mandelman said the meeting "gave the community an opportunity to hear directly from Veritas about their plans for the Church and Market area and to express the great frustration folks have about the storefront vacancies. My hope is that Veritas will now follow through on the commitments they made and will be more engaged with the neighbors and local merchants going forward."