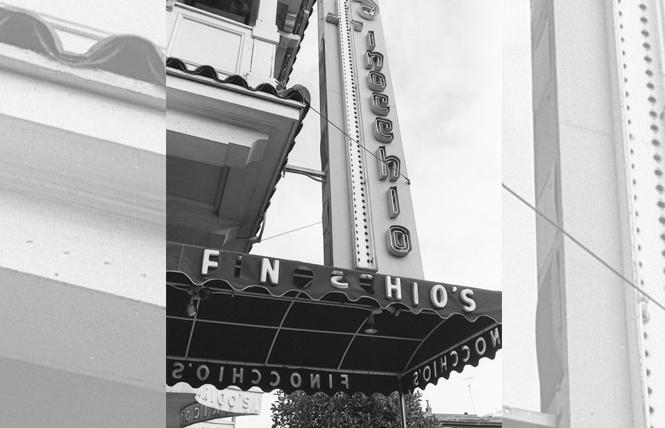 One of the North Beach historical markers will honor the former Finocchio's, a legendary female impersonators cabaret. Photo: Rick Gerharter

Sidewalk markers at the site of three historic LGBT businesses that once operated in North Beach will be unveiled at a ceremony in mid-February.

The trio is among 10 bronze street plaques commemorating historical locations in the city's Italian neighborhood that the Top of Broadway Community Benefit District is installing in the area. All three of the LGBT nightlife spots were shuttered decades ago.

One of the 17 by 12 inch markers will be placed at 12 Saroyan Place, formerly Adler Street, where a lesbian bar operated in the 1950s. Proprietor Eleanor "Tommy" Vasu was the first known lesbian to legally own a bar in San Francisco, according to a resolution adopted by the Board of Supervisors last summer in support of the plaques.

Amid a citywide crackdown on gay bars, Vasu was forced to close the two lesbian bars she owned in North Beach in 1954, according to the resolution authored by District 3 Supervisor Aaron Peskin, who represents the neighborhood.

Another plaque will be installed at 506 Broadway Street, which between 1936 and 1999 had been home to the legendary Finocchio's female impersonators cabaret. (The business's neon sign is now part of the GLBT Historical Society's archives.)

According to the historical marker, "Finocchio's cabaret featured female impersonators, both gay and straight, performing in elaborate shows that drew in sailors and tourists alike, as well as the watchful eye of law enforcement."

The third plaque honoring an LGBT entertainment venue will be installed at 440 Broadway, where Mona's Club 440 had operated and was known as "Where Girls Will Be Boys." Started by Mona Sargent Hood and her then-husband, Jimmie, the bar is credited as being the first openly lesbian bar in the nation, having first opened in 1936 in a different location.

Women dressed as men would entertain the crowd at Mona's, whose popularity spiked during World War II. In 1948 the bar was renamed as Ann's 440 Club and was where the careers of comedian Lenny Bruce and singer Johnny Mathis began.

"I think it is absolutely awesome," said Lynda Brabec, 57, Hood's stepgranddaughter who lives in Lake County and plans to attend the dedication ceremony for the historical markers. "I am totally blown away that she paved the way for so many people to be who they are and not have to hide from other people just to be comfortable."

Hood, who never had children of her own, married Brabec's mother's father, Layton Hood, after he divorced his first wife. As a child Brabec would often visit her grandparents and go swimming at their house.

"Mona would have been so proud," said Brabec. "She was such a free spirit and she never judged anybody. She used to say no one knows what goes on between two people but the two people themselves."

After Brabec married her former husband and had kids of her own, she would host the Hoods at her home for Thanksgiving. The two never talked much about Hood's place in LGBT history.

"She talked about owning bars and living a bohemian-type life, but that was as far as it ever went. All she said was a lot of artists would hang out at her bars," recalled Brabec. "She never really bragged about anything."

It was only in recent years that Brabec began learning from internet searches about her stepgrandmother's role in running some of the city's first LGBT hangouts.

"She had a very open mind and open heart," Brabec said. "She would always talk to everybody."

The historical markers will be installed starting Monday, February 5, and the official dedication ceremony will take place at 2 p.m. Friday, February 16, at 12 Saroyan Place.

"We are very excited to see them be put in the ground. It has been a long time coming," said Dominic LiMandri, the district manager for New City America, which oversees the CBD in North Beach and others around the Bay Area.

The Top of Broadway CBD began work on the historical markers project four years ago when it won a $30,000 Community Challenge Grant from the city. The money paid for the cost to fabricate and install the 10 plaques, which were produced by the Berkeley-based Artworks Foundry that also created the bronze plaques in the Castro's Rainbow Honor Walk celebrating deceased LGBT luminaries.

"In undertaking this project the CBD wanted to tell the story of Broadway and uncover its very diverse, enriching past," said LiMandri.

He noted it highlights how Broadway's entertainment district cultivated the city's early LGBT community as well as other ethnic groups.

"What we hope to accomplish with putting these plaques in the ground is to tell a different story than what most people know about Broadway," said LiMandri. "We hope it brings a new generation into Broadway to tell the story of where it has been and where it is going."

The CBD is looking to apply for additional funding to install more historic markers in the area. For more information on the North Beach plaque project, visit the CBD's website at http://www.topofbroadwaycbd.org/historical-marker-project/.