Jock Talk: Putting the 'flame' in the Olympic flame 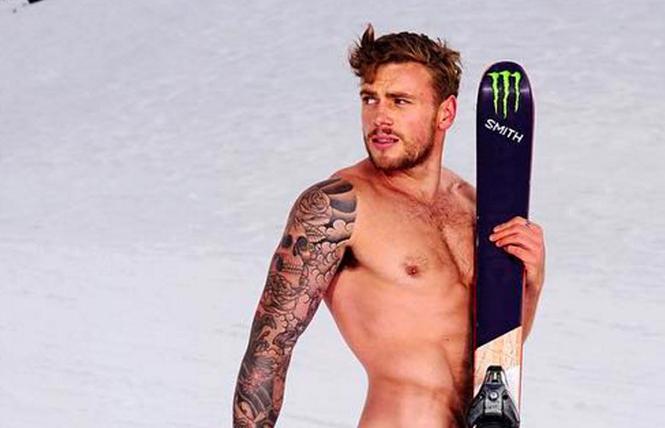 There will be no ducking the gay presence for NBC this time when the Winter Olympics open in South Korea next week.

NBC has shied away from reporting all things gay and fabulous in previous Winter and Summer Olympics coverage. It steadfastly ignored as much as possible LGBT protests at the Sochi Winter Olympics, despite the newsworthiness of the issue in a country hostile to queer folk and the stated values of the International Olympic Committee; and during the 2008 Summer Olympics in Beijing it avoided showing Australian platform diver Matthew Mitcham kissing his boyfriend in celebration of his gold medal victory.

But there will be no denying the matter this go round. For the first time, the United States will be competing with two openly gay men in its ranks - and they've already said they're not happy homophobe Vice President Mike Pence will be "representing" the American contingent.

Adam Rippon, 28, qualified in men's figure skating at the beginning of January - the first openly gay man ever selected to represent the United States. Gus Kenworthy joined him two weeks later when he qualified for the freestyle ski team with a second-place finish in the free ski slopestyle. Kenworthy, 26, won silver at the 2014 Winter Games and came out a year later. A third potential gay male Olympian, luger John Fennell, missed out in team qualifiers in December.

Rippon criticized the choice of Pence to lead the national Olympic delegation, citing the vice president's apparent support of gay conversion therapy (aka cruel, unsuccessful, psychological torture) - an assertion denied by Pence's spokesmen that draws on Pence's statement on his 2000 campaign website, "Resources should be directed toward those institutions which provide assistance to those seeking to change their sexual behavior."

Rippon said he might skip the traditional pre-Olympic meet-and-greet because he does not want to be distracted by meeting Pence.

"If it were before my event, I would absolutely not go out of my way to meet somebody who I felt has gone out of their way to not only show that they aren't a friend of a gay person but that they think that they're sick," he said. "I wouldn't go out of my way to meet somebody like that. If I had the chance to meet him afterwards, after I'm finished competing, there might be a possibility to have an open conversation. But I don't think the current administration represents the values that I was taught growing up. Mike Pence doesn't stand for anything that I really believe in."

Kenworthy told USA Today, "I feel the same way. I think it's not the person I would have expected, and I think it sends mixed messages because this is the first time we're seeing out U.S. Olympic athletes competing in the Winter Olympics, and then we have someone leading the delegation that doesn't support that, and doesn't support the LGBT community, and has spoken against it. I think it doesn't send the right message. It's unfortunate."

Kenworthy will be bringing something else to Pyeongchang that has been rare for gay athletes: endorsements. Since coming out, Kenworthy has been signed by Visa, Toyota, Ralph Lauren, Deloitte, and 24 Hour Fitness, and has made a commercial for Head and Shoulders shampoo that features a rainbow flag.

Gay pairs skater Tim LeDuc is an alternate member of the U.S. team.

Gay Olympians who will represent other countries include snowboarder Belle Brockhoff and cross-country skier Barbara Jezersek for Australia; and pairs figure skater Eric Radford for Canada.

Hong Kong signs Gay Games pact
The Federation of Gay Games announced Sunday, January 28, that it had signed a license agreement with Hong Kong 2022 to host Gay Games XI in four years. Hong Kong was selected as the nominative host at the FGG's annual meeting last year in Paris, under a deadline for the parties to reach agreement by the end of January.

"Winning the bid to host the Gay Games in Hong Kong in 2022 has been the achievement of a dedicated and wonderful team which I'm proud to lead," said Dennis Philipse, founder of the bid organization. "The signing of the license agreement marks an important step in the continuation of this amazing journey - a journey that will culminate with the first-ever Gay Games in Asia, an incredible milestone for the Federation of Gay Games and participants from the region."

A record 17 cities were in the first round of bid submissions before the field was culled to eight semifinalists, including San Francisco, before being trimmed to three finalists: Hong Kong; Washington, D.C.; and Guadalajara, Mexico.

For registration information on the 2018 Gay Games, visit http://www.paris2018.com.

Cleveland dropping offensive mascot
The Cleveland Indians and Major League Baseball announced this week that the team will stop using its Chief Wahoo mascot in 2019 but will retain the team nickname.

Native American groups for years have protested both the name and the mascot. The Chief Wahoo mascot is a demeaning red-faced, buck-toothed caricature that the team has slowly been downplaying in its marketing the past couple of years.

"Major League Baseball is committed to building a culture of diversity and inclusion throughout the game," said MLB Commissioner Rob Manfred. "Over the past year, we encouraged dialogue with the Indians organization about the club's use of the Chief Wahoo logo. The club ultimately agreed with my position that the logo is no longer appropriate for on-field use in Major League Baseball."

In other news, Washington, D.C.'s pro football team will continue to identify itself with a racist slur.