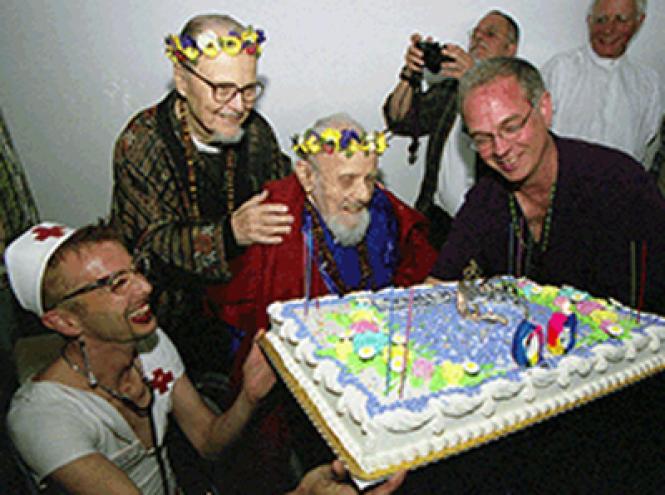 A podcast devoted to the founding and evolution of the Mattachine Society, one of the earliest homophile organizations in the United States, recently debuted.

The 10-episode "Mattachine" podcast, available for free on iTunes and at http://www.mattachinepod.com , follows the story of the secret organization, which was founded in Los Angeles in 1950, and has been credited with spawning the country's LGBTQ rights movement.

"From a spark of inspiration in 1920s Chicago, through secret speakeasy-style meetings that brought together anonymous homosexuals," the podcast uses FBI case files and other sources to examine the paranoia wrought by communist-hunting Senator Joseph McCarthy, said a news release for the program, which launched January 4. The "witch hunt" eventually "pulled the communist queer activists apart, scattering the seeds of the movement," the podcast's creators stated.

Acknowledged by many as the founder of the modern gay and lesbian rights movement, Hay died in 2002 in San Francisco.

In response to the Bay Area Reporter's emailed questions, producer and host Devlyn Camp, who's 25 and lives in Chicago, said, "I was out for almost a decade before I started reading about the Mattachine Society, and assumed I was pretty well-versed in queer culture. Reading these stories about our community opened my eyes to the problems that persist today. This show is certainly about how outside forces view the queer community, but it's just as much about how we view ourselves. Studying history is never a waste of time, especially when political pressure is coming down on us again under [President Donald] Trump. His administration is doing terrible things to our community, and we can learn how to fight him by studying what our ancestors did."

Camp, who's genderqueer and uses third person pronouns, said they started their research and writing "about two years ago," and recorded and produced the show during most of the last year.

"It's been a fantastic and educational journey," Camp said. "It started with stacks of books and several audio files, and then I had a really fun time digging into files at the ONE [National Gay & Lesbian] Archives at the USC Libraries, which is the largest queer archive in the world."

The show's main source is "Behind the Mask of the Mattachine" by James Sears, said Camp; "The Lavender Scare" by David K. Johnson, and "Hoover's War on Gays" by Douglas Charles "were also extremely important resources," they said.

Joey Cain, a longtime gay San Francisco resident who's a Mattachine Society expert, said in a phone interview that he wasn't familiar with the podcast.

"What I would hope they would get and be able to communicate to people is the level of strength and integrity it took to convince other gay men that we had something in common besides just who we wanted to have sex with," said Cain.