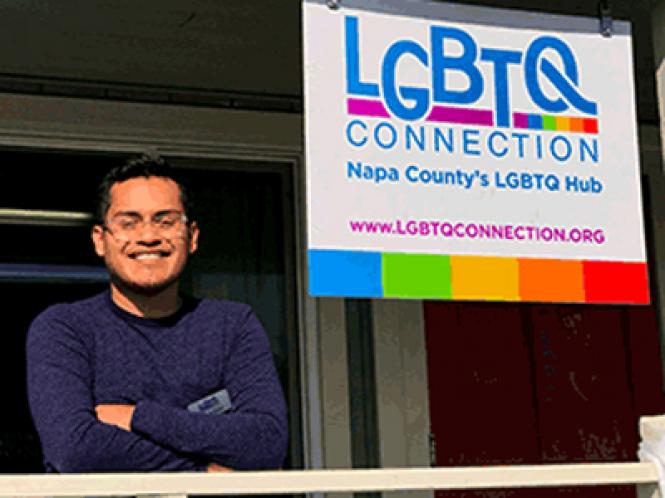 Following the October wildfires in the North Bay, LGBT youth in Napa and Sonoma counties sprang into action - helping their own community and others.

"These are the times that we really do need to come together as an individual community and as a larger community, or what we call Sonoma County," said Javier Rivera-Rosales, director of programs at Positive Images, an LGBT youth organization in Santa Rosa. "There's a sense of humanity that happens in a disaster."

"I guess people are starting to realize how much we need each other," said Bass about what has changed after the fire. "They don't care what you're doing. They don't care how you identify."

Bass was one of many who had to evacuate during the fires.

LGBTQ youth leaders quickly acted in the early hours of October 9, when their phones started ringing, alerting them about the fires and evacuations.

Staff at LGBTQ Connection and Positive Images initiated phone trees to connect with team members and participants to ensure they were safe, Eduardo Rivera, a 29-year-old queer man who is program coordinator at LGBTQ Connection in Napa, told the Bay Area Reporter.

As the fires raged, Rivera and Rivera-Rosales worked with their teams, identifying needs in the community. Some lost everything in the flames.

"It's a community trauma," said Rivera. "It's very beautiful for me to be able to help folks."

On the Move, a youth leadership development organization, quickly connected the Spanish-speaking youth among its umbrella organizations, including LGBTQ Connection, and hooked them up with the graphic response team on the emergency alert system. The youth translated announcements into Spanish to the community, Rivera said.

Matt Boiadjiess and Rivera worked at the evacuation centers in Calistoga.

Both organizations opened their offices by October 11. LGBT youth and their friends could come in and connect to free Wi-Fi, charge their devices, and get food and support. Donations began pouring in. The organizations funneled the supplies to people in the community.

For the youth, it wasn't just about them. They were also concerned about LGBT seniors and undocumented individuals, they said. They rapidly reached out to the various communities, offering services and support.

At the end of October, LGBTQ Connection and Positive Images started to resume regular programming.

Boiadjiess and Rivera said they were still helping at the shelters, guiding people to assistance.

Several people recalled that there was an eerie atmosphere before the fires broke out.

Rivera-Rosales said the energy was unusual, with the warm winds that were behaving strangely.

"I had this weird feeling that something was going to happen," said Bass. "The winds were so strong. It was like, something's not right. I figured like, it's California, it would be an earthquake."

Despite the oddity they, like others, went to sleep, but were awoken during the early morning hours.

Rivera-Rosales received a call from a friend telling him that, "Santa Rosa is on fire," he said.

On the other side of the hill, the night started out like any other for Rivera and Boiadjiess, who were then awakened by calls.

Rivera didn't have to evacuate even though his family's home was near the Silverado Trail.

For Boiadjiess the phone call was the beginning of a very long night for him and his family.

"We could see the glow in the mountains," said Boiadjiess, who fled over the hill from Calistoga to Santa Rosa with his family, only to keep moving from one location to another as evacuations were issued throughout the early morning hours.

It was two long days before the family returned home. Fortunately, the family's house was saved, along with the animals they left behind in the rush to get to safety.

Boiadjiess then focused on working with LGBTQ Connection at evacuation centers in Calistoga.

"I feel like this is going to be something that maybe, some folks aren't experiencing any emotions now, but [in] a month ... it's going to crop up. Something's going to be triggered," said Rivera. "One of the most powerful aspects of this is that we learned a lot from our young folks. They're driving their enthusiasm and their resilience for going forward."

LGBTQ youth and adults can learn more at an upcoming holiday event sponsored by LGBTQ Connection Sonoma and Positive Images.

"Recovering with Pride: A Holiday Gathering" takes place Saturday, December 9, from 3 to 6 p.m. at Fountaingrove Lodge, 4210 Thomas Lake Harris Drive in Santa Rosa. The party will be an opportunity to learn about what is being done to support LGBTQ people and fire victims. Admission is free and open to the public. To RSVP, contact eliseo@lgbtqconnection.org or visit http://bit.ly/2hBAbFS