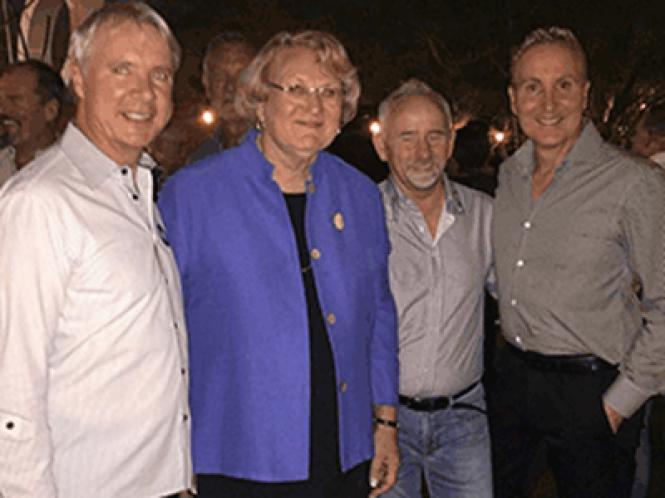 Middleton, a former Bay Area resident, placed first Tuesday night in the race for two seats on the Palm Springs City Council. Netting 5,968 votes, close to 31 percent of those cast, according to unofficial results Wednesday morning, Middleton was the top vote-getter among the six candidates on the ballot in the longtime gay desert mecca in Riverside County.

"This campaign is going to be a win campaign and it is all because of you. We are here tonight celebrating a victory, a historic victory, for our city and for our state," Middleton told a cheering crowd at her election night party at 849 Restaurant. "I made a bet on Palm Springs that it would respond to a positive message, that Palm Springs wanted to move forward not backward, that Palm Springs was ready to deal straightforwardly with whatever issues we have in front of us by working together. Guess what? More people responded to that message than responded to the alternative."

Middleton, 65, moved to Palm Springs with her wife, Cheryl O'Callaghan, in 2011 and has been serving on the city's planning commission. Her election was part of a wave of historic victories for transgender candidates on Tuesday night in Virginia, Pennsylvania, and Minnesota. [See story, page 12.]

The string of wins comes seven years after Oakland resident Victoria Kolakowski, the wife of Bay Area Reporter news editor Cynthia Laird, became the first out transgender elected official in the state by winning a judicial seat on the Alameda County Superior Court, on which she continues to serve.

"In light of the repeated attacks on transgender people from the federal government, tonight's wins by Lisa Middleton in Palm Springs and other transgender candidates in Minneapolis and Virginia are a beacon of hope that voters have embraced values of equality and inclusion," stated Rick Zbur, executive director of the statewide LGBT advocacy organization Equality California. "By becoming the first out transgender person to be elected to a non-judicial office in California, Lisa is paving the way for others to follow in her footsteps in California and across the nation. Her first place finish out of a field of six candidates demonstrates that a glass ceiling for transgender people who want to serve in elected office was not only broken, but was shattered in Palm Springs."

Winning the other council seat in Palm Springs was attorney Christy Holstege, 31, who identifies as bisexual according to the Gay and Lesbian Victory Fund, which like EQCA endorsed her and Middleton. According to the unofficial returns, Holstege received 5,810 votes or 30.08 percent of the total.

Married to Adam Gilbert, a business owner and a third-generation resident of the city, Holstege noted the historic nature of the council race outcome in a message she posted to Facebook, shortly after the first election results were announced, thanking those who supported her candidacy.

"I am especially honored to share this victory with Lisa Middleton, whose historic election makes her the highest elected transgender official in California," wrote Holstege. "I want to commend all of the candidates for their willingness to serve and dedicate their time to the democratic process. I am incredibly excited about the future of Palm Springs. I'm looking forward to getting to work and build a Palm Springs that works for all of us!"

Falling short Tuesday was another former resident of the Bay Area, Robert Julian Stone, a gay man who was the B.A.R.'s film critic in the 1990s and early 2000s, and worked as a real estate agent while in San Francisco. He placed fourth in the race with 2,313 votes, or 11.98 percent, based on the unofficial returns.

In an email to his backers Wednesday morning, Stone wrote that, "when you take on the entrenched political establishment of any city, the path to victory will always be full of obstacles and obstructions. I believe I remained true to my vision of a city government free of the taint of corruption. Now that the existing council successfully filled the vacant seats with the candidates they financed and supported, we must remain vigilant."

The victories by Middleton and Holstege mean that LGBT leaders will be serving in all five seats on the Palm Springs council. The two other council seats are currently held by gay men, as is the city's mayor position, which has a voting seat on the council.

Middleton and Holstege will be succeeding council members Ginny Foat, a lesbian who had endorsed both women in the race, and Chris Mills, who is straight. Both decided not to seek re-election.

Their departures from the council will mark a changing of the guard at City Hall, as all four of the council members and the mayor will have entered office after the scandal involving gay former mayor Steve Pougnet. In 2015, after it was revealed that he had failed to disclose being a paid consultant of a local developer the City Council had sold a prime downtown parcel to, Pougnet announced he would not seek re-election.

He was indicted earlier this year on bribery and other charges, and in early October, Pougnet and the two other defendants in the case all plead not guilty. The three defendants remain free on $25,000 bail and were expected to return to court Wednesday for a felony settlement conference, according to local media reports.