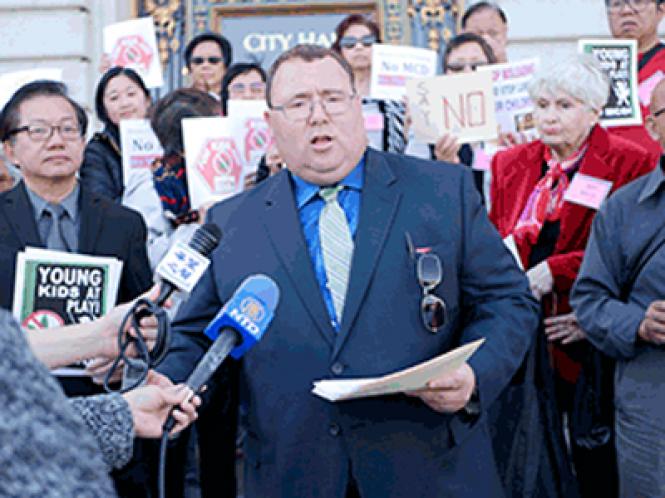 Frank Hacke of the Pacific Justice Institute speaks at a rally before Tuesday's hearing on the Apothecarium dispensary  (Source:Sari Staver)

In rejecting a medical cannabis dispensary for the city's Sunset district, San Francisco's Board of Supervisors fell for a misinformation campaign led by an anti-gay group, contend supporters of the pot club.

The Apothecarium, a highly respected medical cannabis dispensary that operates in the Castro and other locations, saw its permit for a dispensary at 2505 Noriega Street withdrawn on a 9-2 vote Tuesday by the supervisors, following a lengthy hearing.

"I am shocked and disgusted that my colleagues gave a victory to the Pacific Justice Institute," gay HIV-positive Supervisor Jeff Sheehy, who has been open about his own medicinal use of cannabis, said in a phone interview Wednesday.

PJI is labeled as an anti-LGBT hate group by the Southern Poverty Law Center, though its leaders dispute that. The group has led the opposition to the Apothecarium's Sunset dispensary, along with the Chinese American Democratic Club.

"It was absolutely surreal to watch colleague after colleague criticize Pacific Justice and then vote in their favor," said Sheehy. "PJI is a hate group. Validating them is validating hate and it's just wrong."

Only Sheehy and Supervisor Malia Cohen voted in favor of the Apothecarium.

Those supervisors who opposed the Apothecarium's plans "are yet another indication that the stigma surrounding medical cannabis still exists," Sheehy said.

Sheehy, who last week introduced legislation around recreational use of marijuana, which is set to be legal in California come January 1, said he now questions whether that can be accomplished.

"I am now wondering whether this board is going to be capable of making rules around adult use of cannabis," said Sheehy. "Eighty percent of the city voted for it but the board doesn't seem to be prepared to accept that."

The Apothecarium "is no different than Walgreens or CVS," added.

The Apothecarium's plans, in the works for over three years, had been approved 5-1 by the San Francisco Planning Commission in July but the decision was appealed by PJI, which organized the neighborhood to try to keep the dispensary out. PJI claimed its presence would be a danger to children and bring a crime wave to the neighborhood, neither of which has happened in other areas with dispensaries.

Eight votes were needed by PJI to overturn the planning commission's conditional use permit, so the Apothecarium needed just two more votes by the supervisors to allow it to maintain its permit and proceed with plans to open the dispensary in the Sunset, whose residents now have to travel to other parts of the city or use a delivery service to obtain medical cannabis. According to the Apothecarium, some 3,900 Sunset residents use the Castro dispensary; the dispensary serves some 65,000 patients in the city.

Daniel Bergerac, a gay man who is president of the Castro Merchants Association, said the supervisors' decision is particularly sad for residents of the Sunset district, who need access to medical cannabis.

In a telephone interview with the B.A.R. after the hearing, Bergerac said that other than Sheehy and Cohen, "the so-called progressives of the Board of Supervisors voted against people having safe access to medication."

"Kowtowing to Pacific Justice Institute is shameful," said Bergerac. "These are progressives? If this is the leadership of the city, it's no wonder people are defecating in the streets."

Bergerac emphasized the wide acclaim the Apothecarium has received over the past six years it has been in the neighborhood, noting that it has donated over $350,000 to local charities and that a number of its executives are now serving on community governing boards.

"The Apothecarium is what every small business should be," he said.

Had the dispensary opened, it would've been the city's first Chinese-owned dispensary, operated by Dr. Floyd Huen and his wife, former Oakland mayor and cannabis activist Jean Quan. Huen, an internist in practice for over 30 years in the East Bay, has prescribed cannabis for decades, helping patients to stop using opiates for pain, among many other uses.

Tuesday's Board of Supervisors meeting was contentious and, at times, nasty.

Dozens of medical cannabis advocates, testifying on behalf of the Apothecarium, denounced PJI as spreading lies about cannabis. At a news conference before an earlier hearing, PRI said that people have died from cannabis overdoses, a claim that has never been reported in the medical literature or elsewhere.

But accusations of duplicity came from both sides of the issue. District 4 Supervisor Katy Tang, who lives in the neighborhood where the Apothecarium wanted to open, accused Apothecarium Executive Director Ryan Hudson of attempting to "conceal the truth" when he told the supervisors that he was uncertain whether the Apothecarium would be eligible to convert its medical dispensaries to stores that sell recreational pot, which will be legal beginning in 2018. Tang claimed that Hudson had told the planning commission that the Apothecarium wanted to sell cannabis for adult use.

Hudson told the supervisors that dispensaries should be in all parts of the city.

"District 4 is the only district in the city that doesn't have a dispensary," he said at the hearing. "That's not fair to the other districts and it's not fair to Sunset patients. It's also not in line with our city's policy of dispersion of medical cannabis dispensaries."

In making their decision, Tang reminded her colleagues that it should be focused on whether the neighborhood "wanted and needed" a dispensary at this location, not whether they believed in medical cannabis.

Tuesday's hearing included one-minute testimonials from dozens of residents of the Sunset, who gave the same story they have at previous hearings, that the addition of a medical dispensary would harm children, increase crime, and drive down property values and revenues at local businesses. None cited any examples that similar results happened in other locations where cannabis businesses were opened.

"Just the opposite," said Bergerac. "The Apothecarium has been a tremendous asset to the Castro."