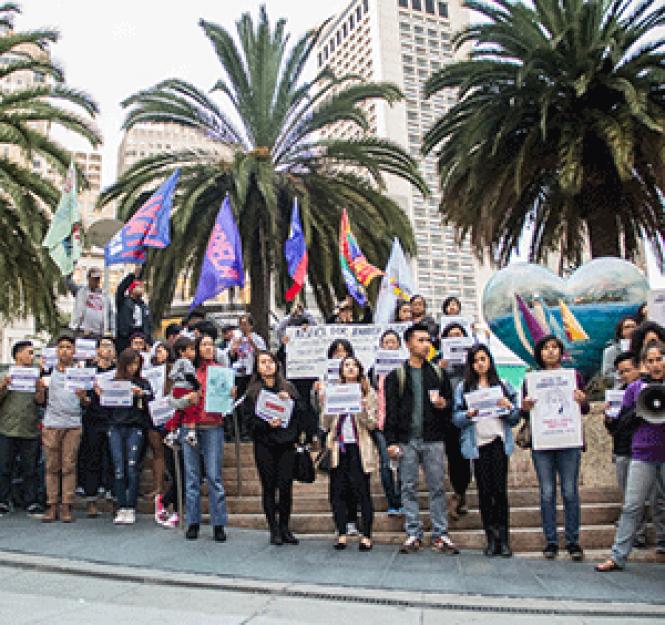 Activists around the world are angered by Laude's murder and concerned about potential political maneuvering in the case.

Police found Laude, 26, slumped on the floor half-naked with her head leaning against the toilet bowl in the bathroom of the Celzone Lodge in Olongapo City on October 11. It appeared that she was strangled and she was covered with a dozen bruises, bite marks, and cuts, according to media reports.

Police believe that she died from "asphyxia by drowning," according to media reports.

A joint investigation has been launched by the Philippine National Police and U.S. Naval Criminal Investigative Service.

Jen Psaki, spokeswoman of the U.S. State Department said, "We will continue to cooperate fully with the Philippine law enforcement authorities in every aspect of the investigation."

U.S. Embassy spokeswoman Anna Richey, agreed, adding, "The United States will continue to assist in the investigation to help ensure justice is served.

"This will include making the suspect, witnesses, and any evidence gathered available to the Philippine authorities," she added.

Four other witnesses were also detained by Philippine police.

Philippine Department of Foreign Affairs spokesman Charles Jose said his country has jurisdiction in the case and that there will be a trial in Philippine courts.

Philippine General Gregorio Pio Catapang, the chief of staff of the armed forces there, said during an October 14 news conference that the relationship between the Philippines and U.S. hasn't been hurt by the incident.

The investigation hasn't quelled human rights and LGBT rights activists. Many are concerned that Pemberton will be allowed to go free under the Enhanced Defense Cooperation Agreement, signed by President Barack Obama during a state visit to Manila earlier this year. The agreement calls for "full respect for the Philippines Constitution and Philippine laws," by U.S. military personnel, reported the Diplomat, an Asia-Pacific foreign affairs journal.

The U.S. has been stepping up its presence in the Pacific using the Philippines as its base. Hundreds of military personnel are in the country for training exercises.

Pemberton, of the 2nd Battalion, 9th Marines out of Camp Lejeune in North Carolina, returned to the amphibious assault ship Peleliu. He was detained by Naval authorities, reported the Marine Times .

All other ships have deployed from Olongapo City, except for the Peleliu, which will remain until the investigation and legal proceedings are completed.

The hearings could take days or weeks. The prosecutor can either bring criminal charges or drop the case. Pemberton faces life in prison if he is officially charged with murder and convicted, according to media reports.

Witnesses told authorities that they saw Laude and a friend dancing at a disco club near the hotel. Laude was seen checking into the hotel with a foreign white man an hour after they left the disco, according to media reports.

According to the police report, Laude and Pemberton were accompanied by Laude's friend Mark Clarence Gelviro, also known as Barbie, to the hotel. Laude asked Gelviro to leave, "before the suspect knew that they are gays," reported the news site Rappler.

According to witness accounts, Pemberton was seen leaving the Celzone Lodge a few minutes after he and Laude checked in, but an hour later Laude was found dead by police.

Friends and family told reporters that Laude wasn't a sex worker or involved in drugs.

LGBT rights activists in the Philippines and U.S. and Laude's family and fiancÃ© are demanding that Pemberton be handed over to Philippine authorities.

"What we don't want to happen is that her murderer gets away as a free man and gets back here in the United States and gets called a hero for serving in the U.S. military," said Faye Lacanilao of Bayan-USA.

LGBT activists around the world have already staged protests outside of Philippine consulates and embassies with demonstrators demanding justice for Laude and for the U.S. to get out of the Philippines.

Laude was described by her family and her German fiance Marc Suselbeck as a generous and loving person. She was the main breadwinner in her family, sending money home to her mother in Leyte.

"She was full of joy. She was selfless, and did not get on bad terms with anyone," her friend, Roann Dollete Labrador, told Rappler.

Suselbeck, who lives in Germany and met Laude online, planned to marry her. The couple got engaged in 2012 and attempted to marry once before, but German authorities wouldn't authorize Laude's visa in 2013. The couple set their sights on Thailand for their wedding. Laude's visa appointment with the German Embassy was scheduled for October 16.

There have been a lot of positive changes for LGBT rights in the Philippines recently, but LGBT Filipinos still face discrimination and violence.

Laude's murder shone a spotlight on the issues transgender individuals continue to face.

Filipino LGBT activists called upon members of the Philippine Senate to pass the Anti-Discrimination Act of 2014 immediately.

According to Philippine LGBT Hate Crime Watch, there were 164 cases of murdered LGBTs in the country from 1996 to June 2012.

Currently, only two provinces out of 81 and seven cities and municipalities out of 1,637 in the Philippines have anti-discrimination protection, according to the Philippine Statistical Agency.

On the heels of Laude's murder, the Metro Manila Pride launched its "Come Out for Love: Kasi Pag-ibig Pa Rin" campaign for the 20th Pride celebration.

The campaign encourages LGBT couples to share their photos of love and their personal love story online through social media using #ComeOutforLove.

The Pride event is set for December 6.

"What we want to emphasize is that the fight for equal rights is a fight for human rights and that when discrimination happens it doesn't affect LGBTs only but even their loved ones," said campaign organizer Rhanch Macalalad, a representative of the Task Force Pride Philippines, which organized the Pride event, reported the Inquirer.