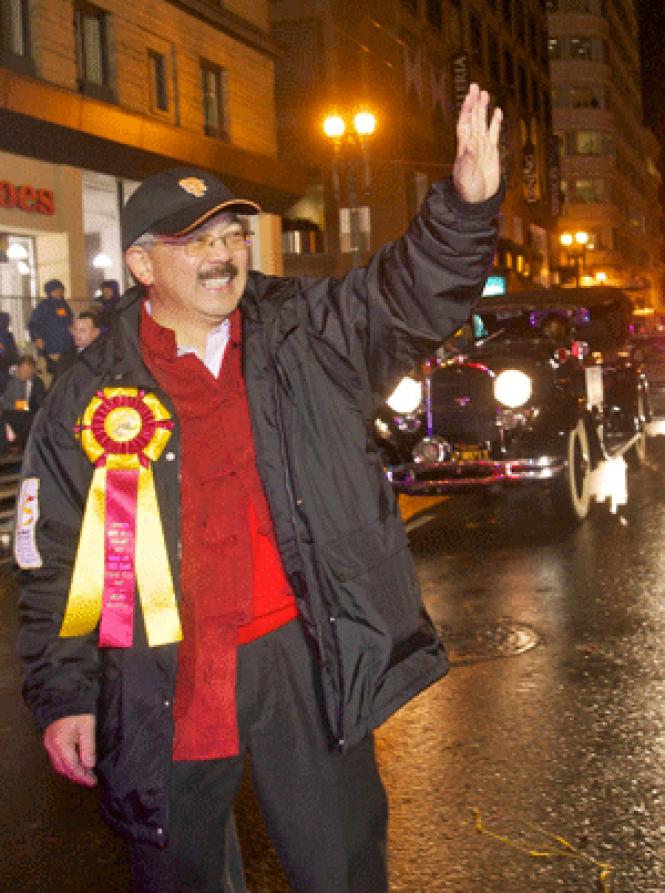 The swearing-in of Mayor Ed Lee as the city's first Asian American mayor in January has been heralded as a sea change in San Francisco's political landscape, with Asian Americans becoming dominant players at City Hall and in the voting booth.

In addition to Lee's taking over Room 200, politicians of Asian descent are serving as the city's public defender, assessor-recorder and hold four seats on the Board of Supervisors, including the board presidency. Two of the city's four-person legislative delegation — a state Senator and Assembly member — are Asian Americans. And Asian Americans now account for a third of the city's residents.

Largely missing from this newfound political presence are LGBT Asian Americans. Only one out politician, Community College Board member Lawrence Wong, is currently in elected office. He has held the post since 1994, when he became the first openly gay Asian man to be elected to public office in the United States.

The only other Asian American from the LGBT community to win an elective office in San Francisco was Angie Fa, who in 1992 became the first out lesbian to win a seat on the city's public school board.

So far, among the crop of people expected to seek the mayor's office and district attorney in the fall, none are out Asian candidates. Among the dozens of candidates who sought supervisor seats last year, none were LGBT Asian Americans.

In 2008 transgender advocate and HIV activist Cecilia Chung had been expected to seek the District 11 supervisor seat but decided not to due to health concerns. No other out Asian candidates emerged that year.

In fact, there has never been an out Asian American supervisor in San Francisco.

"I would have been the first gay Asian on the Board of Supervisors if I was elected. That is fine I was not; I continued my work on the college board," said Wong, who lost to Aaron Peskin in 2000 for the District 3 seat now held by Board President David Chiu. "There has not been an out Asian American elected for a higher office and not an out Asian running since. I don't think it has anything to do with the fact that there is obstacles. Up until very recently, politics was not considered an aspiration or an aspiration encouraged in the Asian culture."

Rather, Asian parents pushed their children into other professions, said Wong.

"One was encouraged to be a lawyer or doctor or engineer," he said. "For those of us who have been in politics, we are clearly pioneers."

Benjamin Leong, co-chair of the Gay Asian Political Alliance in San Francisco, said having an out Asian member of the city's board of supervisors would have a powerful impact.

"Yes, I would love to see a gay Asian on the Board of Supervisors. It would go a long way of fighting the cultural norms," said Leong, who is also involved with the National Queer API Alliance, a coalition for local LGBT Asian and Pacific Islander groups that is set to launch a visibility campaign to encourage more APIs to come out. "A lot of gay Asians are afraid of coming out. Unless you are in San Francisco, you are not going to see a lot of proud and out gay Asians."

Whether Lee's time as interim mayor will convince LGBT Asians to seek public office remains to be seen. Their absence from City Hall isn't for a lack of credible candidates, said Wong.

"Of course we have many, many LGBT Asians who are activists and in my mind courageous leaders in San Francisco. There is no doubt; I could name a few people who would be good candidates," said Wong, who first met the mayor when he served as a human rights commissioner and Lee was named executive director of the city agency.

Yet, Wong said, for whatever reasons, "They are not willing to take that next step. There is also the recognition that sometimes many of us feel we can accomplish more and contribute more as community activists outside of politics."

While he believes the growing number of Asian elected officials will encourage more Asian Americans to seek public office, Wong said he is unsure if it will convince more out Asians to do so.

"Clearly, there is no doubt it is going to create an environment in which Asian Americans in general will feel the possibility of being elected and being a supervisor or being a mayor of a great city like San Francisco. Now that is different from whether or not these examples are going to send the same message to a gay Asian," said Wong, who now lives in the city's District 1 and has no plans to again run for supervisor.

Leong, for one, said he has no desire to seek public office.

"I don't see myself as a politician, per se. I am more of a background worker and fighting for rights," he said.

Asian American politicians say they face unique hurdles convincing non-Asian voters to elect them. And for out candidates, it can be a challenge within the Asian American community to attract support.

"When I ran, I ran as an openly gay man. Members of the Chinese community would snub me, ignore me, walk away from me when I made public appearances at that time. It was a difficult time," recalled Wong of his first race. "The LGBT community always has been very supportive, and I am very proud to say that. Now the Asian community is always supportive."

During his campaign 17 years ago he had to cancel a fundraiser he had planned at a Chinatown restaurant after community members pressured the owner. While he no longer faces such problems, Wong said it is still difficult for Asian Americans to be openly LGBT.

As was seen last winter during the federal trial against Proposition 8, the same-sex marriage ban California voters adopted in 2008, a larger portion of support for the anti-gay measure came from Asian evangelical Christian voters in the Bay Area.

"Having an out gay Asian supervisor would be huge. They would be a role model," said Leong. "As soon as people realize that gays are not any different from anybody else, we are just regular people, the more accepting they are."

When that milestone will be reached is anybody's guess.

"I really don't know when it could happen. I know people in the community have aspirations of doing it," said Leong. "Maybe in the next four years, hopefully, we will be successful in getting a gay Asian elected."

GAPA will host its annual banquet from 6 to 9 p.m. Saturday, February 26 at the Empress of China, 838 Grant Avenue, in San Francisco. For more information, visit http://gapa.org/banquet.