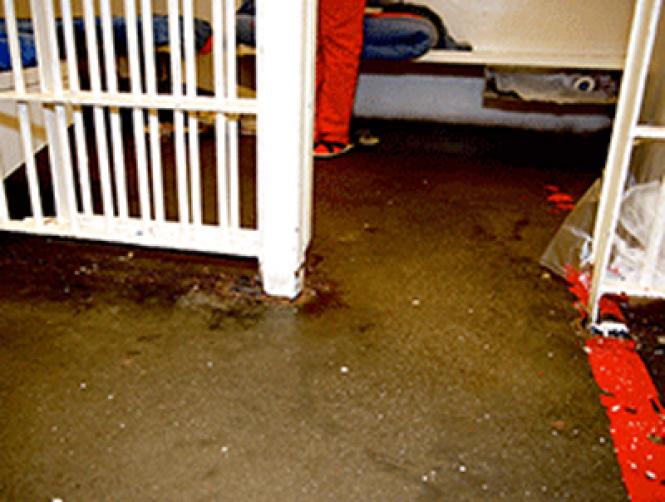 State lawmakers and others will continue working to reform cash bail in California, which would help some inmates  (Source:Jane Philomen Cleland)

After failing to pass legislation this year to reform California's bail system - which many say keeps people in jail just because they can't afford to buy their release - legislators, the governor, and the state's top judge have announced that they'll work together to craft successful legislation.

"The truth is today, under the cash bail system, if you can write a check, public safety doesn't matter," state Senator Bob Hertzberg (D-Van Nuys), said in statement. "We need a system that prioritizes public safety and restores justice to the pretrial process, regardless of income level."

Hertzberg's Senate Bill 10, known as the California Money Bail Reform Act of 2017, would have required that pretrial services agencies conduct risk assessments and recommend conditions of release for defendants pretrial, among other provisions. People arrested for certain violent felonies wouldn't have been eligible.

In an August 25 statement from Governor Jerry Brown's office, Hertzberg said that working with Brown and Chief Justice Tani G. Cantil-Sakauye, "we will find the right balance by fine-tuning the details in SB 10."

Hertzberg said in another statement that officials plan to continue investigating "the failures of the bail system and the insurance companies that support it," which were "exposed" during the attempt to pass SB 10.

Asked in a phone interview about changes that will need to be made to the bill, Hertzberg said that judges "will want more discretion" and "more power" than what was in the original legislation.

Referring to the infamous convicted murderer who raped a woman in Maryland in 1986 after he failed to return to a Massachusetts prison after being let out on a weekend furlough program, Hertzberg said, "It's easy for a judge worried about a Willie Horton case to deny bail to anybody who walks into a courtroom."

Legislators need to consider "judges who are worried about somebody hurting the public safety," he added, and are "going to set the bail as high as they can."

Hertzberg said that he's spoken to Brown "a number of times" about his legislation.

Although monitoring people outside jail is considerably less expensive than keeping them in custody, Hertzberg said that state finance officials only look at the financial cost of risk assessment programs.

Bonta wasn't available for an interview, but in a statement, he said, "Our momentum in support of bail reform continues to grow. We are very grateful to the governor and the chief justice for recognizing the need to prioritize this legislation and for their unprecedented commitment to partner with us in creating reform that enhances public safety and ensures equal justice."

Brown stated, "I believe that inequities exist in California's bail system and I look forward to working this fall on ways to reform the system in a cost-effective and fair manner, considering public safety as well as the rights of the accused."

Cantil-Sakauye said, "During my State of the Judiciary address last year I suggested that the current bail system may not effectively serve its intended purpose of protecting public safety and ensuring court appearance without disproportionately impacting low-income Californians. I subsequently appointed a Pretrial Detention Reform Work Group to study current pretrial detention practices and provide recommendations for potential reforms. I look forward to sharing these recommendations with the governor and Legislature as we work together to improve our bail system."

San Francisco Public Defender Jeff Adachi said in an interview, "It is disappointing we won't have bail reform this year," as the current system "continues to [affect] a lot of victims, people who are forced to post bond with usurious rates of interest and every day having to essentially buy their way out of jail."

These are "folks who haven't been found guilty of a crime," said Adachi. "They're simply accused of a crime."

"Bail should really only be set in cases where there's a demonstrated risk of flight," he added. "It has to be specific," and it needs to be shown that the defendant "has ties to other places and is ready to flee. Everyone else should be released if they have not been convicted of a crime," and don't otherwise present a risk to public safety.

Risk assessments with release recommendations "should be mandatory for all crimes except the most serious, and risk assessments should basically determine whether a person is kept in jail" or released before trial, said Adachi. "These are validated tools which have been used and applied in millions of cases."

Adachi places much of the blame for bail reform's failure with judges.

"The judges want to maintain their power and political cover, and they are really, in my view, trying to undercut bail reform by excluding certain crimes from the system where money would not be the determining factor in whether someone is released," he said.

In an email, Adachi added, "The judges are proposing that SB 10 apply to non-serious, non-violent felonies, which would take most crimes out of the bail reform initiative, and that they would retain the ultimate say in deciding whether to follow the tool. So they are basically saying that we don't want to be bound by the pretrial assessment tool and we don't want bail reform to be applied to most crimes."

He also told the Bay Area Reporter that the California Judges Association and the Alliance of California Judges "have come out as opposed to bail reform, saying things like it's too complicated and too burdensome or too expensive."

Adachi said that his response is that "judges are supposed to care about justice being accessible to the poor, yet every day they set bail amounts essentially keeping people in jail," and defendants who can't afford to post bail often plead guilty just to get out.

"Even in San Francisco," which courtroom a defendant ends up in and which judge they get determines whether they'll be released, "and our system is not supposed to work that way," he said.

Neither of the state judges' groups responded to requests for comment.

Donlan has previously stated, "The right to bail is guaranteed by the California Constitution and the court follows state law in setting bail."

Adachi said another obstacle to bail reform is, not surprisingly, the bail bond industry, which "has a direct interest in defeating bail reform, and they have a very powerful lobby. ... I think people understand the bail bond industry is going to strongly oppose this. The question ultimately is we have to decide as a society, should we continue to incarcerate people based on the amount of money they have, and, should we continue to support an industry that essentially profits from this inequity."

A call to the California Bail Agents Association wasn't returned.

Gascon has stated, "The money bail system is inherently unfair and archaic. We must move to a data driven risk assessment model in order to enhance public safety by making custody decisions based on risk, not financial status. A risk assessment model will also save jurisdictions money on pretrial incarceration costs, and contribute to our notions of social justice."

Since she's charged with assault with a firearm, it's not clear whether a risk assessment would help Nori Tejero, but with her $175,000 bail, it's doubtful she'll get out of jail anytime soon.

Tejero, 44, a transgender woman, has been in custody since July 5, when she allegedly shot her ex-partner in the leg in a San Jose Costco parking lot. (Tejero told the B.A.R. that she shot the man, but she hasn't entered a plea and she isn't likely to go to trial for at least several months.)

Dani Castro, a friend of Tejero's, said last week, "I don't like the current [bail] system. It's not OK to make freedom have a dollar amount attached to it, especially for the most marginalized. Those are the people that are going to jail, for the most part, that are being arrested, and there's no possibility of bail"

Castro, who's said that Tejero was "marginally housed" at the time of the shooting, said that Tejero would need to post 10 percent of her $175,000 bail, or $17,500, along with four people's signatures, to be released.

She said that she and other friends were able to raise money so that Tejero could buy items from the jail commissary and make phone calls, but they weren't able to gather funds for bail.

"It's really frustrating not to be able to help her be with the people she loves," said Castro.

In 2015, the Washington, D.C.-based nonprofit Equal Justice Under Law filed a federal lawsuit that eventually included San Francisco Sheriff Vicki Hennessy as a defendant. Through the lawsuit, which is still pending, the group is seeking to end the practice of money bail in the city.

According to an October 2016 news release from Equal Justice and Adachi's office, "Approximately 50 people per day and 18,000 people per year are booked into San Francisco County Jail. About 85 percent of inmates have not yet been convicted. Because they cannot afford bail, they can remain locked up for months while awaiting trial, often losing their housing, jobs, or children."

Hennessy has said that she supports bail reform.

"I am sworn to follow the law and await the outcome of these court proceedings," she's stated. "However, a system that allows one person access to immediate freedom through the payment of cash while another person with the same criminal history and charges who lacks financial resources remains behind bars seems unfair to me."

Gay state Senator Scott Wiener (D-San Francisco), who had a hand in SB 10, said he'd continue being "a strong supporter" of the legislation.

"We should be making pretrial detention decisions based on whether someone poses a risk or not, not whether they're rich or poor," said Wiener.

One LGBT legislator who hasn't supported the proposal is lesbian Assemblywoman Sabrina Cervantes (D-Corona), who voted against AB 42. A spokesman for Cervantes didn't respond to an interview request.

While many tout the value of pretrial risk assessments, one flawed evaluation in San Francisco led to Lamonte Terrell Mims, 20, being allowed to stay out of jail after a July 11 arraignment. Alex Bastian, a spokesman for the DA's office, has said that case was related to Mims' charges that included being a felon in possession of a firearm.

According to prosecutors, on July 16, Mims and Fantasy Decuir, 20, murdered Edward French, a gay 71-year-old, at Twin Peaks. Mims and Decuir have both pleaded not guilty in the case. Mims is being held without bail, according to jail records, while Decuir's bail is set at $5 million.

Asked about Mims, Adachi said, "According to all the reports that I've seen, this gentleman would not have been recommended for release had the correct information been input into the bail algorithm, and it was only because a prior jail commitment was misinterpreted that he was recommended for release. That particular instance wasn't a failure of the test, it was a human error that caused the recommendation for release. ... You can never predict the future, and no tool is capable of being able to predict what a human being does if released. What's the answer? Keep everyone in jail? We can only manage risk. We can't control it."

Wiener called French's killing "a horrible, tragic situation," and he said the assessment error needs to be investigated to "make sure those mistakes don't happen in the future." (Nancy Rubin, interim CEO of the San Francisco Pretrial Diversion Program, told officials in an August 15 letter that the agency was conducting an internal review of the Mims assessment.)

"There are people who have been released on bail and have committed crimes against people," he said. "Anytime someone is released pretrial, with or without bail, they can commit a crime."

Hertzberg, SB 10's author, also attributed Mims' release to "human error," and said mistakes happen "on both sides," whether assessments or cash bail are used. "These are sensitive things."