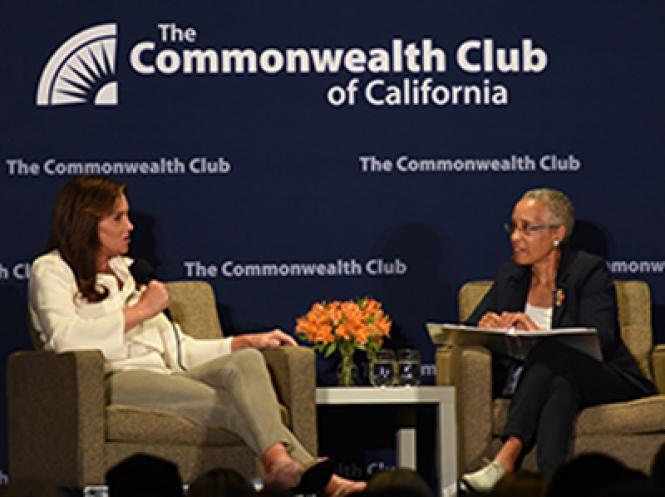 When Caitlyn Jenner was writing her recently published book, "The Secrets of My Life," co-author Buzz Bissinger pressed her to disclose her regrets, if any.

"I wasn't a very good parent," the former Olympic athlete said she told Bissinger, the Vanity Fair writer who has written a number of award-winning nonfiction books.

"I was too caught up in my own issues" to be able to focus on her children, which included two she fathered with ex-wife Kris Kardashian Jenner as well as four stepchildren Kris had with the late Robert Kardashian, the celebrity attorney who represented O.J. Simpson.

Jenner was married to three different women prior to coming out as a transgender woman in 2015, and has six biological children from those relationships.

Speaking to a sold out audience of 700 people at the Mark Hopkins Hotel May 3, Jenner, 67, said she has since apologized to her children, some of whom are now celebrities themselves.

As for other regrets, said Jenner, "I still talk too much about myself," a quality that worked in her favor during the 75-minute conversation with moderator LaDoris Cordell, a former Superior Court judge who now stars in a new Fox TV reality show, "You the Jury."

Jenner's San Francisco speaking engagement, sponsored by the Commonwealth Club, was part of a national tour to promote her book, "which I just learned is number four" on the New York Times best seller list, she announced at the event.

The Commonwealth Club had initially reserved the much larger Castro Theatre (which accommodates 1,400) but switched to a smaller ballroom at the glitzy Nob Hill location. While the club's spokeswoman Riki Rafner said such venue changes "often happen," another Commonwealth employee, who asked not to be identified, said weak ticket sales and a fear of demonstrators sparked the decision to move the event.

Still, there were obvious concerns about a protest at the Mark Hopkins, with security guards checking bags of all attendees and a handful of people distributing a long list of mostly snarky questions, such as "Are you trying to get pregnant?" (If the questions made their way up to the stage, where they were screened by Cordell, they definitely weren't asked.)

Karla Gottschalk, a transgender woman who attended the Jenner event to attempt to submit questions to her, said in a telephone interview with the Bay Area Reporter that she wanted to ask Jenner if her "Hollywood transformation gives young people an unrealistic view of transgenderism."

The evening went smoothly, although Jenner declined to personally autograph books, as is typically done at such events, and refused to do any one-on-one interviews with the local media.

Opening the conversation, Cordell asked Jenner about the purpose of the book.

"It is the story of my long struggle and not a self-help book," she replied.

Jenner still sounds bitter about the decades when the tabloids "tried to destroy" her with stories about her cross-dressing before her transition.

When she began her transition, "I would've liked to go to a cabin in the backwoods of Alaska ... but I knew the tabloids would find me anyway," she said.

Jenner said that she "controlled the narrative" by giving exclusive stories to Diane Sawyer of ABC-TV and to Vanity Fair, arrangements negotiated by her longtime public relations representatives.

The book recounts her decades of "sneaking around" when she dressed as a woman. Even today, "I still cry when I read" it because of all the painful memories of living a double life.

"Today my life is so simple," she said. "I just get up and am able to be myself. It's a wonderful feeling."

The paparazzi still hound her, "but I'm not going to change my routine of going to Starbucks" just because they hang out there, she said.

When asked about her 91-year-old mother's reaction to her transition, Jenner said, "She worries about me being lonely and wonders if I'll find" a long-term companion.

"Are you looking, and if so, who should apply?" asked Cordell.

"I have a lot of transgender friends. When you're 18, 19, or 20 years old you want to date" and possibly have children "just like any normal human being," she said, not answering the question about whether she might prefer to date men or women. "If I meet someone who enjoys what I'm doing," Jenner said she'd "welcome" the chance to have a relationship.

"But it's not high on my priority list," she added.

When asked about her politics, Jenner pointed out that the book has "less than a page and a half" devoted to that subject.

Acknowledging that she is a "conservative," Jenner explained that her loyalties are not with "Trump and the Republicans" but that she does believe in "the Constitution ... lower taxes ... and less regulation."

"My loyalties are with my community," said Jenner, who said that she is going to focus on trying to convince the Republican Party to support equality for the trans community. "I want Republicans to get to know transgender people."

In a follow-up interview after the event, Cordell expressed skepticism about Jenner's attempts to change the views of Republican Party members.

In an email to the B.A.R., Cordell said she believes Jenner is "very sincere" about hoping Republicans will be more supportive of the LGBT community.

"I also think that she is naive to believe that her sitting at the table with these ultra-conservative, anti-LGBTQ people will result in their having a change of heart," said Cordell, who is a lesbian.

Cordell said she'd read "the entire book," describing it as "brutally honest" and "as with any memoir, its accuracy is in the eye of the author."

Overall, said Cordell, "I found Caitlyn to be friendly, approachable, and willing to tackle all of the questions that I asked of her, none of which were given to her in advance. I certainly disagreed with her answers on political subjects - being a Republican, spending time talking to Trump, and her apparent opposition to gun control."