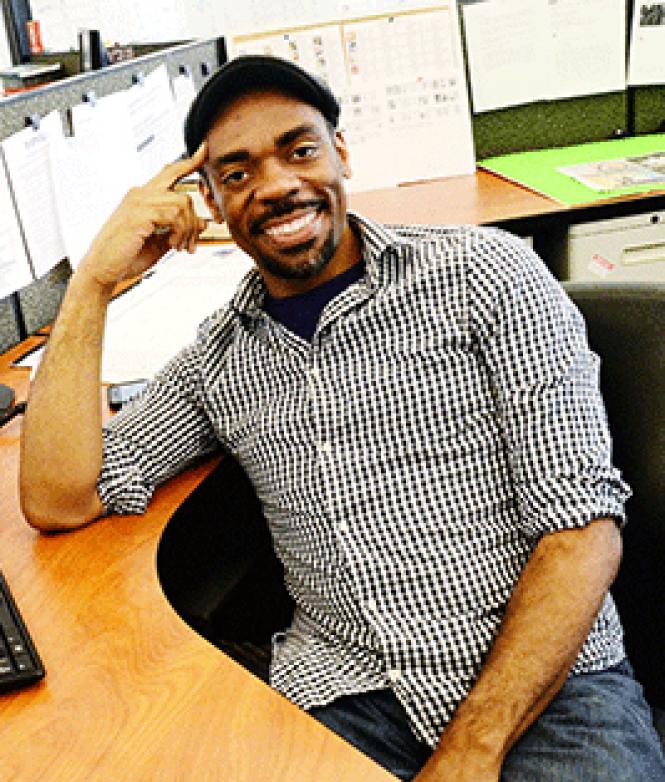 A gay African-American man with 16 years of editorial experience has been named editor of SF Weekly, a 30-year-old free alternative weekly newspaper owned by the San Francisco Media Company, which also publishes the San Francisco Examiner.

Channing Joseph took over in September, after several years of freelance reporting and editing in the Bay Area. He replaces Chris Roberts, who was fired, according to a source close to the transaction who asked to remain anonymous.

In an email, Roberts wrote, "I love the Weekly and I hope Channing does great."

Joseph, 35, comes to the job with a strong editorial background. Previously, he managed teams of reporters, editors, and multimedia producers at the New York Times, the New York Sun, and the Associated Press and has edited work that has gone on to win both the Polk Award and Pulitzer Prize, according to Joseph.

In an interview last week with the Bay Area Reporter , Joseph said he "is looking for a new stable of contributors who can write stories about people who are at the margins and who are not necessarily getting the attention in the conversations we are now having."

Working with arts and culture editor Peter Lawrence Kane and music editor Jessie Schiewe, Joseph said he "needs to figure out what will appeal to readers" as well as "what will be profitable" for the paper.

"I'm focused on where those two things intersect and how to make it work," he said.

"I think it's about time for the paper to just have a refresh on a lot of the things we're doing," Joseph added. "As far as I'm aware, I'm the first black gay editor they've had so I may be interested in things that we haven't done before.

"As a gay African-American man, I know what it feels like to have my communities' stories go untold," Joseph said.

As he looks for new writers, Joseph said he hopes to find people "across age, ability, ethnic background, and gender identity ... people who may not have thought of themselves as writers" before.

Joseph said he also plans to publish more "hard hitting investigations and glimpses into areas of San Francisco people never knew existed ... the hidden city." Plans for the publication's monthly cannabis supplement, Evergreen, have not been finalized, he said.

Already, Channing is somewhat of a celebrity in San Francisco, after billboard pictures of him in a bright yellow tank top appeared on Muni vehicles, as the "poster boy" for UCSF Medical Center, following his successful kidney transplant operation there last year.

Joseph's failing kidneys were what brought him to San Francisco three years ago, he explained.

While living in Brooklyn and working for the Times , Joseph was diagnosed with kidney failure. He learned that the average wait for a transplant was seven to eight years, and concluded that he had "very limited time left" to enjoy life.

On a visit to San Francisco, Joseph recalled thinking, "If I'm going to die, do I want to do it in New York or do I want to go somewhere and have another adventure before my last hurrah?

"And I suddenly got in touch with my deep sense of regret at not settling in San Francisco" instead of staying in New York, where he received a master's degree in journalism from Columbia University.

To move to San Francisco, Joseph got a job at AP, packed his bags, "and began what I thought was my final adventure," he said.

But shortly after moving to the city, Joseph learned his time in San Francisco might be longer than he'd anticipated, when his uncle agreed to donate a kidney, and the transplant team at UCSF found a spot for him on the surgery schedule.

In the meantime, said Joseph, he'd "lost his job" at AP, "but gained a new life, which meant I had endless options" on the horizon.

While freelancing, Joseph was contacted by SF Weekly , which asked him if he'd be interested in "taking the wheel," he said.

"It's the first time I'd ever been pursued so aggressively and I must admit, it was very flattering," he said.

Evenings and weekends, Joseph and his partner, Vincent Rowe, 42, the director of diversity at the Marin Country Day School, enjoy karaoke at Club OMG and the meditation group for people of color at the East Bay Meditation Center.

"We can usually be seen in leather and thongs at local street fairs as well," he said in an email. Hobbies include genealogy, travel, and black and LGBT American history. He is working on a book about the first black drag queens in America.

Joseph lives in an apartment in the Tenderloin, close to his office at 835 Market Street.

In an email to the B.A.R., he said, "Each day as I walk to work, I get to see our city's heart-breaking class divide on display. Also, at least for now, I think it's important to be a member of the community that I am reporting on. That being said, I want the 'SF' in SF Weekly to represent the entire Bay Area and to tell the stories of people who live all across our region. But San Francisco is the epicenter of it all.

"The three years since I moved here from Brooklyn, I have fallen in love with the city in all its weirdness, and I am excited to have the opportunity to chronicle the trials and triumphs of its artists and innovators, gadflies and gangsters, homeless folk and hippies," he said.

According to his September 14 introductory note in SF Weekly, Joseph was named a fellow of the International Center for Journalists and was awarded a Ford Foundation grant for international reporting.

Joseph's LinkedIn profile says he has also been a visiting assistant professor of journalism at the State University of New York. He has written for MTV.com, Time Inc., Entertainment Weekly, the Atlantic , U.S. News & World Report , Glamour, and the Washington Post.