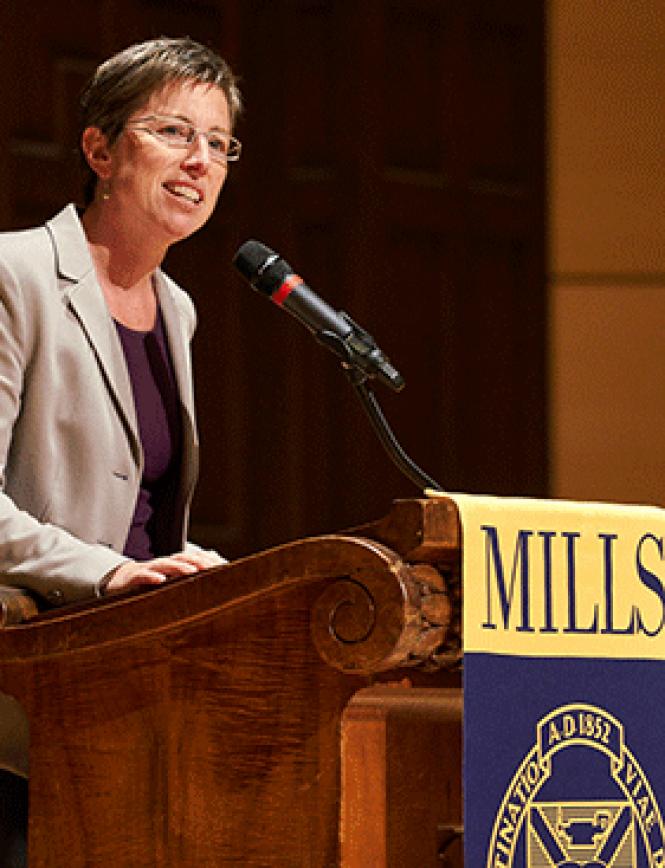 But her parents constantly emphasized the importance of higher education, a message Hillman took to heart.

Armed with four degrees, including an undergraduate degree in electrical engineering from Duke University, a master's degree in history from the University of Pennsylvania, and a joint Ph.D.-law degree from Yale, Hillman, 48, is, among other things, an internationally recognized expert on military law, history, and culture. She moved to California in 2006 to teach at UC Hastings College of the Law and in 2013 was named provost and academic dean of the school.

On Friday, Hillman, a lesbian, will be inaugurated as president of the prestigious Mills College in Oakland. Her wife and five children have already moved onto campus with her, following her appointment July 1.

"One of my goals," said Hillman in a recent interview with the Bay Area Reporter, "is to make sustainable the kind of education Mills offers to the kinds of students we have now," she said. "We face the same financial challenges" as other institutions of higher education and are "under siege to prove we are worth it," she added.

Hillman aims to help the college stabilize its enrollment, now fewer than 900 undergraduates. Mills is an undergraduate women's college with graduate programs for women and men.

According to Hillman, some 40 percent of Mills' students identify as LGBT or other gender fluid identities.

As a child, said Hillman, she didn't have her eye on any particular career.

"I remember my mother telling us that she gave my father an ultimatum ... she wouldn't accept his marriage proposal until he agreed to get his college degree," she recalled.

Her dad, a mid-level manager at U.S. Steel, went on to become an accountant after he got his degree, thanks to the G.I. Bill, Hillman said. Her mom worked as a dietician, taking time off to raise Hillman and her four siblings, a twin sister and three older brothers.

Taking a cue from her father, Hillman obtained an ROTC scholarship that enabled her to get a bachelor's degree in electrical engineering, which landed her an assignment as a space operations officer at the Cheyenne Mountain Air Force Base in Colorado Springs.

At first, said Hillman, her interest in the Air Force was merely as a means to college tuition. But her experiences in ROTC, "seduced me hook, line, and sinker and I really wanted to be successful" in the military, she recalled.

"I was exposed to the values of people working together in public service," Hillman said. "I liked the leadership opportunities and found that a lot of the experiences were fun for me."

But after six years in Colorado, including two teaching at the Air Force Academy, "I was ready to go back to graduate school," said Hillman. While in Colorado, she had married a man, another Air Force officer, she said.

This time, the Air Force Academy awarded Hillman a scholarship that allowed her to get her master's degree in history, "my second degree on their nickel," she noted.

When she arrived in Philadelphia to begin her studies at Penn in 1997, "it was really the first time I'd lived in a big city," she said. "The world really opened up for me."

"I had never been in an environment with open LGBT people," Hillman said. "Of course they had been there all along but it wasn't until I found a community of intellectually engaged graduate students at Penn that I began to see myself in a different light.

"As I began the process of soul searching, I pretty quickly realized that it was not likely that I was going to stay married," she added.

Coming out to her Catholic family "wasn't simple" Hillman said. "My parents really didn't want to talk about it but they also didn't want to punish or exclude me in any way," she said.

"They were worried about me," she said diplomatically.

At the same time Hillman was coming to terms with her sexual orientation, she also realized that once her scholarship commitment was completed, she didn't want to stay in the Air Force.

The turning point, she recalled, was the day she overheard another officer make a snide remark during a presentation by a general talking about the mission of the Air Force. "I heard someone say, 'In the Air Force we kill people and blow things up.'"

"I had already started to question the values of the Air Force; what good it did in the world," Hillman added. "I was realizing that the military wasn't going to be a career that was going to work for me because I wasn't the person I thought I was."

After receiving her master's in history at Penn, Hillman wanted to continue in graduate school, "while I figured out my career." She enrolled in a JD/Ph.D. program at Yale with the idea that "being an academic historian could be interesting, but so could a career in law," she said.

When she completed the joint degree, Hillman taught at Yale and Rutgers University School of Law. In 2006, she joined the faculty at the UC Hastings School of Law and in 2013 was appointed provost and academic dean.

That same year, Hillman was tapped to serve on an independent panel, chartered by Congress, to study the U.S. military's response to sexual assault. She received national acclaim when she was one of two members of the nine-member panel who voted against the practice of allowing commanding officers to retain prosecutorial discretion in cases of sexual assault. In arguing against it she wrote, "we should vest discretionary authority to prosecute rape and sexual assault in the same people on whom federal, state, and many respected military criminal justice systems rely: trained, experienced prosecutors."

After six years at Hastings, Hillman learned that the president of Mills, Alecia A. DeCoudreaux had resigned.

"I knew immediately I was interested in the job," she said. "Had the search committee not contacted me, I definitely would've reached out myself."

After a national search, Mills selected Hillman, with search committee chairwoman Katie Sanborn stating that Hillman's academic record and reputation as a strong leader and bridge builder "made her the clear choice" for Mills.

"Her experience in the military and subsequent work on military equity has honed her deep sense of social justice, especially regarding women and gender," Sanborn stated.

Asked how she sees the future for LGBT people in the academic world, Hillman said, "Things have clearly changed for the better for those of us who identify as LGBTQ and lead in higher education.

"It's easier to be ourselves in what is often a public life, and it's easier to integrate our families into our professional lives. I think my identity has affected the topics I've chosen to study and teach as well as my understanding of the many constituencies - students, prospective students and their families, employers, donors and potential donors, and more - I seek to support as a leader."

Women's-only undergrad ends at Mills, as college merges with Boston school
Sign up!