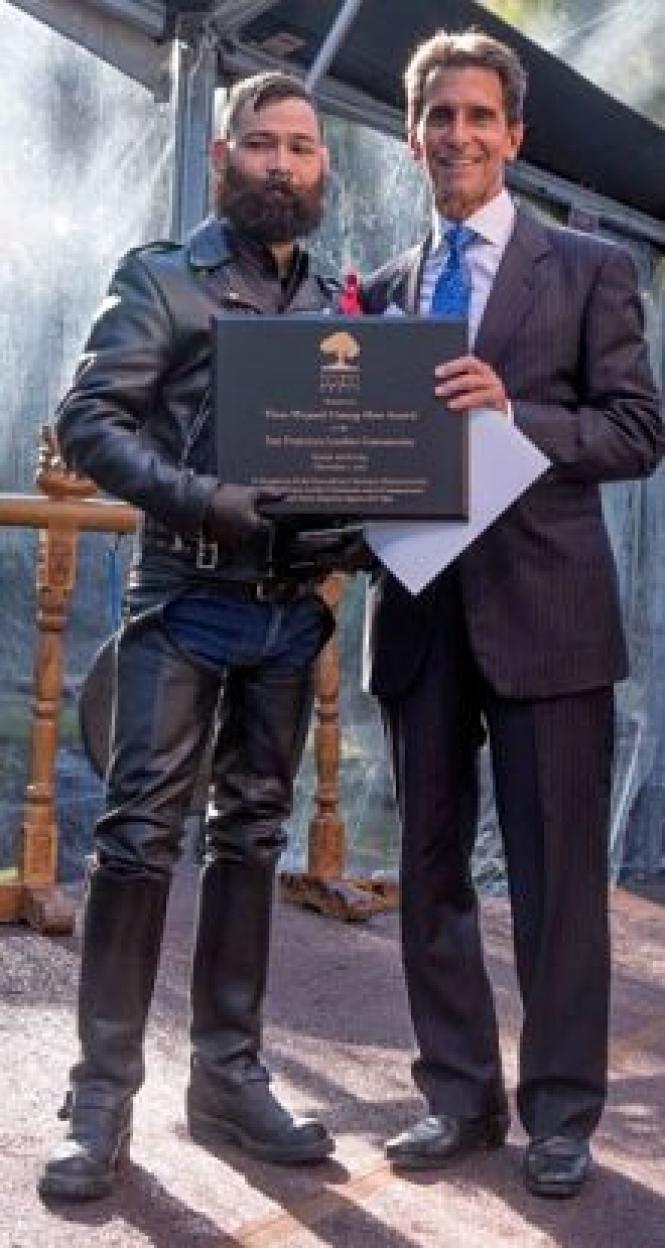 A remarkable event took place on December 1 in the National AIDS Memorial Grove in Golden Gate Park as part of the 22nd Annual World AIDS Day Observance. The San Francisco leather community was honored by the Grove as the Thom Weyand Unsung Hero. Also honored was Robert D. Hass, Chairman Emeritus and CEO of Levi Strauss & Co. from 1984-1999, with the National Leadership Recognition. Additionally, Pedro Zamora Young Leaders Scholarships were given to six students who exemplify the values the Grove seeks to reflect.

For the leather community to be honored in such a public and meaningful way is a historic moment. There was a time when we were consistently pushed to the back of the bus in terms of recognition and acceptance. In the past, some LGBT organizations would intentionally marginalize us and disavow any allegiance to leatherfolk. Our contributions were not always acknowledged or appreciated.

That the Grove would choose to honor the leather community in this way truly marks a day when all the hard work and dedication of our community members is appropriately highlighted. Every leatherman and woman who was part of the army of San Francisco activists, volunteers, fundraisers and caregivers should be rightfully proud.

Here's how the Grove explained our community's contributions in the ceremony's program.

"At the onset of AIDS, the San Francisco Leather Community began losing friends and lovers at an unimaginable rate. No one knew what caused it, how people became infected or if there was any hope for treatment and survival. With nowhere to turn but their own community, they rolled up their leather sleeves and became their own caregivers and health providers - meeting whatever needs they possibly could - which was extremely difficult because many of them were also sick. But these grassroots organizations that started out of necessity became 'models' on a global scale - models that still work to this day."

"By the early 1990s, thousand had died, and many more were dying or very ill. By this time, they had established charitable organizations that helped with emergency basics such as rent, food, and utilities, and even assistance with pets and legal aid - the list goes on. They formed these organizations, held the board positions, and were the volunteer base and producers of a large majority of charitable events and fundraisers. With Folsom/Dore/Castro Street Fairs and countless contests, events and through titleholders, they raised countless millions of dollars over the last 35 years to help those in need and to further the advancement of treatments and education through conversations about HIV."
John B. Cunningham, Executive Director of the National AIDS Memorial Grove.

I asked John B. Cunningham, the Executive Director of the Grove, why the Grove wanted to acknowledge the leather community this way.

"We were so honored to recognize the San Francisco leather community with the 2015 Thom Weyand Unsung Hero award," he said. "The Grove's mission is to ensure the lives of people who have died from AIDS are not forgotten and the story is known by future generations. The story of the leather community's response from day one in the face of such profound loss has been one of action, compassion and love, and will forever be a lesson for those who follow. The National AIDS Memorial strives to reach all who seek to heal and to be heard, and on World AIDS Day hundreds saw and listened to their story. On behalf of the National AIDS Memorial, congratulations and thank you for being a beacon of hope."

Accepting the award on behalf of the San Francisco leather community was Jorge Vieto Jr., who did our community proud with a speech that evoked the passion and specialness of our community as he thanked the Grove for the unique honor. Jorge said many things in his speech that stirred the hearts of those in attendance, especially the large number of leatherfolk who were on hand, many who teared up as Jorge represented what was tangibly felt by everyone in attendance.

Jorge's well-crafted acceptance speech can't be replicated in its entirety here due to space restrictions, but here is part of what he said.

"This is largely because of the groundbreaking work done by my leather predecessors. As a young leatherman, I was taught, very early on, that service is an essential part of our life as leatherfolk. For years I have seen my mentors and my heroes work tirelessly to unite our community under that banner of service, and I have seen the monumental changes that have resulted."

"Our comfort with frank discussions around sex and our skills at negotiating 'what we like and don't like' allowed us to set our own terms around condom use and other ways of protecting ourselves and each other without stigma or shame. As someone who has been working in the trenches of the war on HIV for over a decade, I can see how our knowledge has helped other groups, programs and individuals do just the same."

Jorge went on to point out how our community was the vanguard in terms of ushering in open and non-judgmental conversations about sex, pleasure and passion without shame or guilt. He acknowledged the work of people like Alan Selby and organizations like the AIDS Emergency Fund who were on the cutting edge of addressing the AIDS crisis head on. Jorge specifically thanked every single woman that stood with the men and cared for them in profound ways at the worst times of the epidemic and for which the men will forever be grateful.

During the ceremony an honoree video was shown from a project called : the Leather Community's Response to AIDS created by Jörg Fockele and Marc Smolowitz of The HIV Story Project. The video was a short compilation from a larger collection of personal interviews with members of the leather community including Audrey Joseph, Christopher Raisbeck, Cleo Dubois, Ganymede, Graylin Thornton, Jorge Vieto Jr., Keith Folger, Mark Leno, Mike Shriver, Peter Fiske, Queen Cougar, Rachele Sullivan, Ray Tilton, Steve Gaynes, Suzan Revah and myself. The honoree video and the individual interviews can be viewed on The HIV Story Project's YouTube channel, which you can find by searching for "The HIV Story Project" on YouTube.
Jörg Fockele (left) and Marc Smolowitz (right) of The HIV Story Project. photo: Michael Kerner

Jörg offered this when I asked him why he and Marc undertook the project.

"For Marc Smolowitz, my producing partner, and myself, the multi-year Joining Forces, Surviving Voices partnership with the National AIDS Memorial Grove is such an important moment in our work as filmmakers and storytellers. As co-founders of The HIV Story Project, it has always been our goal to raise awareness, fight stigma and support the HIV positive community.

"We've been able to do that successfully over the past six years through the production of documentaries such as Desert Migration and Still Around , PSAs for local AIDS nonprofits such as WORLD, PAWS and Let's Kick ASS, and through our storytelling booth Generations HIV.

"Now, through our collaborative work with the Grove, we can expand our efforts in the world of AIDS storytelling in an unprecedented way. Both organizations are entirely passionate about telling the stories of those individuals and communities that are underrepresented in the public discourse about AIDS. With that in mind, we could not have picked more deserving subjects and collaborators than the San Francisco leather community. Capturing their stories and memories on video for future generations was way overdue, and we're all extremely proud that they are the first focus of the Grove and The HIV Story Project's storytelling partnership."
AIDS Quilt panels hang inside the tent at the 22nd Annual World AIDS Day Observance in the National AIDS Memorial Grove. Photo: Rich Stadtmiller

Congratulations to our San Francisco leather community on this acknowledgement for all of the work done during the long struggle with HIV. The future is brighter for everyone due to your efforts.