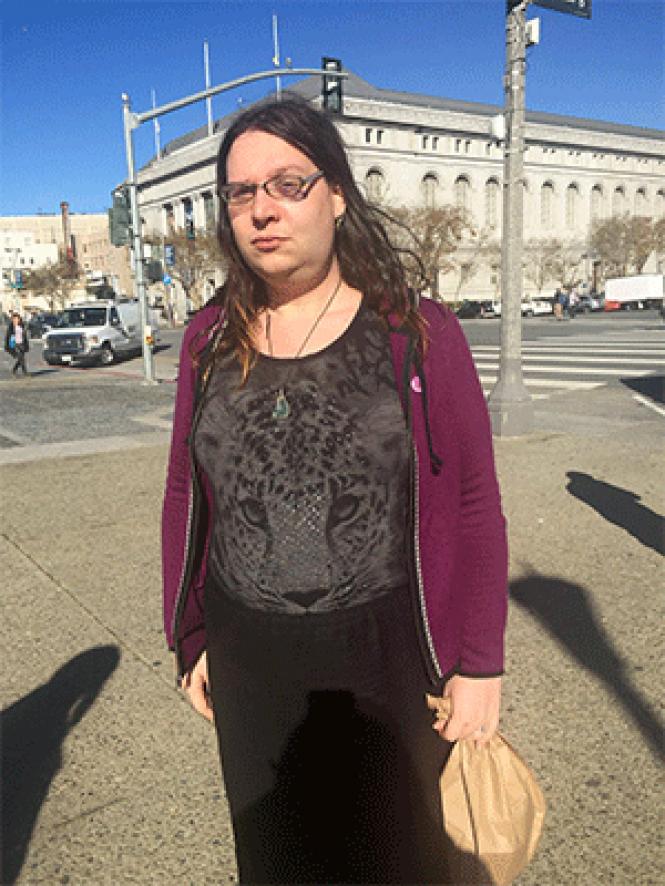 Advocates for the transgender community are criticizing a San Francisco attorney's misgendering of a trans woman who was allegedly assaulted in a recent hate crime.

Deputy Public Defender Kwixuan Maloof, who's representing Dewayne Kemp, one of the people accused of attacking Samantha Hulsey in November, repeatedly referred to Hulsey as a man and used male pronouns for her during the arraignment in the case.

In an interview this week, Hulsey, 25, said the comments made her "really offended and a bit upset. I think that from a legal point of view, him saying that about me is completely pointless, because regardless of whether I am [transgender] or not," Kemp "still committed a hate crime against me based on what he perceived to be my gender or sexuality."

Mara Keisling, executive director of the National Center for Transgender Equality, said of Maloof, who's been with the public defender's office for over a decade, "To me, it seemed like some amateur trying to make the victim look bad, to favor their client, and it was just odd."

After the Bay Area Reporter ran an editorial last week calling on Public Defender Jeff Adachi to provide sensitivity training to his attorneys, Adachi sent an apology to the paper.

"It is my policy that everyone associated with my office treats transgender people with respect and dignity, whether they are clients, victims," or others, Adachi wrote. "This includes referring to transgender individuals by the pronoun that reflects that person's gender identity. Mr. Maloof has expressed it was not his intention to treat Ms. Hulsey in an insensitive manner, but the buck stops with me."

Yet last week, as Maloof questioned Hulsey's partner, Daira Hopwood, 40, who witnessed the incident, he asked several questions about her and Hulsey's gender identities. The queries prompted Hopwood, who's transgender, to call Maloof's line of questioning "transphobic."

Kemp, 36, and his fiancé, Rebecca Westover, 42, both face charges including assault and hate crime allegations stemming from the November 15 incident in the South of Market neighborhood.

The couple has pleaded not guilty and remains in custody. They have claimed the trouble started when Hulsey barged past them and called Kemp the N-word.

Hulsey denies pushing past the couple and using the racial slur.

Flor Bermudez, director of the Oakland-based Transgender Law Center's Detention Project, confirmed Adachi has requested more training and said, "Usually," such sessions feature "a basic transgender 101 that includes myths and stereotypes about what being transgender means," and review of state and federal laws.

"In the particular case of public defenders," Bermudez said, training also covers the ethical obligations attorneys have to advocate for their clients and to "respect the gender identity of whoever they're referring to in the courtroom."

Having "leadership from the top down" and making trainings "not just a one-time thing" are important, she said.

Bermudez, a lesbian ciswoman, declined to comment specifically on the Hulsey case, explaining that TLC isn't involved and she doesn't know enough about what happened.

However, she said, her organization hears comments such as Maloof's "often, coming from all sides" nationally, including from prosecutors, judges, and officials at parole hearings.

"The defense attorney's deliberate misgendering of Ms. Hulsey is disrespectful, uninformed and insulting," Kendell said in an emailed statement. "There is no justification for deploying transphobic comments and it is regrettable that the defense attorney did so in this case."

Rick Zbur, executive director of the LGBT advocacy group Equality California, said in emailed comments, "It's appalling, though not surprising, that defense attorneys are relying on bias against transgender people as part of their defense strategy. That is why it is so important that we continue our work to educate the public to further understanding and acceptance of transgender people, so that juries and judges can better understand the bias and discrimination that underlie these types of strategies in the courtroom."

One state law addresses "circumstances where a transgender panic defense is used to reduce murder charges to manslaughter," Zbur said, so it doesn't apply in Hulsey's situation.

"However," he said, "it appears that defense attorneys in this case are similarly using bias against transgender people to achieve a better outcome for their clients. Assembly Bill 1160, which allows a plaintiff or defendant to request that the jury not consider arguments based on gender identity bias and other factors, should give prosecutors some tools in terms of jury instruction."

Alex Bastian, a spokesman for the district attorney's office, was at the arraignment and later said of Maloof's comments, "I was shocked."

Attorney Murray Zisholz, who's representing Westover and who's also misgendered Hulsey, said outside the courtroom last week that he was "sorry" if his comments "offended anybody," and that hadn't been his intent.

Zisholz said he didn't know such remarks were offensive.

"I thought I'd been referring to her all the time as Samantha Hulsey," he said.

However, Zisholz again misgendered Hulsey by saying, "He identifies himself as a woman, but he's a man in a dress."

Maloof used feminine pronouns when referring to Hulsey at a conditional examination Wednesday, November 25, but he asked Hopwood several questions about her and Hulsey's gender identities and their relationship.

When Maloof asked whether Hopwood knew Hulsey was "born a male," Hopwood said responding in full "would take us half an hour."

After he asked, "Do you know if Samantha was born with a penis?" Hopwood said, "I believe the line of questioning is transphobic," and she preferred not to answer.

As he did several times during the hearing, Assistant District Attorney Blair McGregor objected to Maloof's question. But Superior Court Judge Brendan Conroy allowed it, noting that the defendants were facing hate crime allegations "based on some of these very areas."

Hopwood eventually said that Hulsey "was assigned male at birth."

When Maloof asked whether Hopwood had been designated male at birth, as well, she said that she had.

He then asked her if she knew how long Hulsey had been transitioning from male to female. Hopwood responded it had been "a few years," but said she'd have to ask Hulsey to find out exactly how long it had been.

"Do you know if Samantha is taking medication to increase her estrogen?" Maloof asked.

Hopwood didn't want to answer, saying, "I believe that would violate Samantha's medical privacy." However, she eventually said that she knows Hulsey identifies as transgender, and she's known that since they'd met at the city's Trans March.

Maloof asked Hopwood about knowing "this is not the first time Samantha has used the transgender community for her own political" status.

Conroy sustained McGregor's objection to the question, and Maloof moved on to other topics.

Asked after the hearing about the questions he'd put to Hopwood, Maloof said he needed to establish whether Hulsey's transgender.

"If she's not transgender, then there's no hate crime," Maloof said.

He said he'd asked if Hulsey has a penis because Hopwood hadn't responded to his questioning about whether Hulsey was born male.

"On the record today," Maloof said, there had been "nothing indicating Samantha was transgender until I asked those questions."

Maloof didn't respond to a follow-up email about why he hadn't asked specifically in the beginning of the hearing whether Hulsey and Hopwood identify as transgender.

Hulsey, who didn't attend the arraignment or Wednesday's session, referred to Maloof's line of questioning as "complete bullshit. They should know better than to ask those questions. This is San Francisco," she said, and such queries wouldn't result in any progress in Kemp or Westover's defense.

"I think the experience of court proceedings for transgender people is almost abusive in some ways," she said. She was especially troubled by questions about Hulsey's "private medical history."

"Their need to be systematic changes about how vulnerable groups have their rights protected in court," Hopwood said.

"That is trying to condemn somebody for being trans, and that is just not OK," she said. "I just can't imagine how that was relevant, unless he was hoping to prove that [Hulsey] was somehow just inherently fraudulent and defrauding the world because of her identity."

Bermudez said she didn't know what Maloof was trying to accomplish, but "gender identity should be respected as the self assessment of someone who is saying they identity as such a gender," and there doesn't have to be extensive questioning about it.

"If a person identifies as X or Y, that should be respected," Bermudez said.