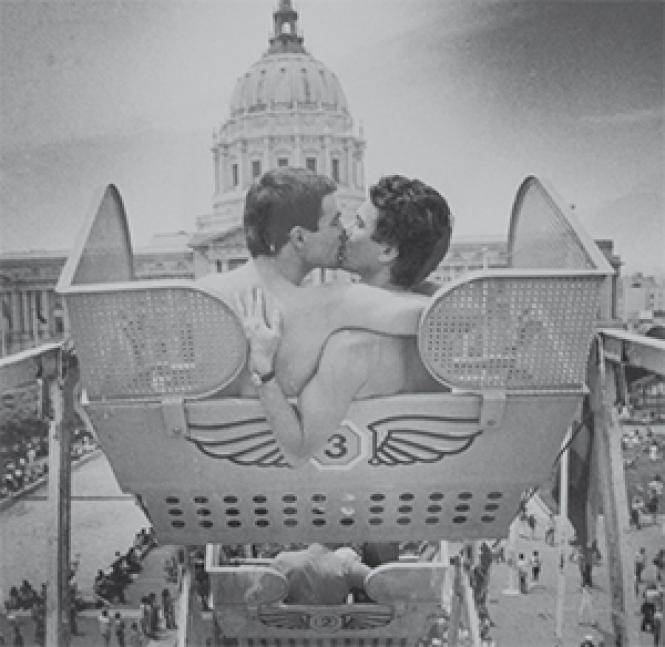 Two years after a pair of local historians began researching San Francisco's queer past, their report documenting often overlooked chapters of the city's history is set to be adopted by city officials. Their hope is it will boost efforts to preserve various sites of particular importance to the LGBT community.

Officially titled the "Citywide Historic Context Statement for Lesbian, Gay, Bisexual, Transgender and Queer History in San Francisco," the 381-page report will be voted on Wednesday, November 18 by the city's Historic Preservation Commission. Once adopted as an official city document, it will assist with efforts to landmark, either by the city or state and national programs, properties of historical significance to the LGBT community.

As the Bay Area Reporter reported in May, after obtaining a draft version of the document through a public records request, the report spans the centuries and features various groups of LGBT residents who called the city home, from Native American two-spirit tribe members and gender nonconforming Chinese immigrants to various artists and service members.

It builds off the 2004 document "Sexing the City: The Development of Sexual Identity Based Subcultures in San Francisco, 1933-1979," the country's first LGBTQ historic context statement. It was written by Damon Scott and the Friends of 1800, a San Francisco-based advocacy organization that fought to protect from demolition the Victorian that is now incorporated into the LGBT Community Center at 1800 Market Street.

Asked recently about shepherding their more expansive report toward its soon-to-be conclusion, Watson joked, "I am sleeping a lot. I have been feeling exhausted."

She added that, "The good news is I feel like it is gratifying on many levels. Most importantly, I feel like we have opened another window on history that has been shadowed for so long."

Graves also told the B.A.R. she feels gratified "to have co-created something so robust. But I also know that it is not the encyclopedia we would all love to see."

Their report begins in the late 15th century when European settlers first encountered the berdache, meaning "kept boys," members of local Native American tribes who adopted the roles of the opposite sex and faced eradication under Spanish missionaries who arrived later.

The document then traces the introduction of laws in the mid-19th century that targeted people for "nonnormative sexual or social behavior or acts" and the "homosocial activity among men" that existed during the Gold Rush days to the birth in 1910 of "an active gay network" of servicemen and civilians in the city "that gathered at private residences and bathhouses."

Cross-dressing by both men and women in the 19th and 20th centuries is covered, as are several of the more noteworthy Barbary Coast female impersonators, like Bothwell Browne, Julian Eltinge, and Ah Ming, whose 1892 obituary declared that "As a female impersonator ... Ming led all of his countrymen."

It delves into the role of bohemians, such as poets and lovers Charles Warren Stoddard and Yone Noguchi, and lesbian poet Elsa Gidlow in helping turn Jackson Square and North Beach into a haven for homosexuals from around the world.

Later arrivals, such as poet Robert Duncan and his partner, visual artist Jess Collins, are included among the Beat generation who played a hand in attracting other LGBTQ artists to the city in the 1950s. The art gallery the couple helped co-found was where gay poet Allen Ginsberg recited his coming-out poem "Howl" in October 1955.

Birth of the Bar Scene

The birth and migration of the city's gay and lesbian bar scene is documented from its early incarnation in North Beach, at places like Finocchio's, Mona's 440 Club, and the Black Cat Cafe between the 1930s to the mid-1960s, to its eventual spread south into the Tenderloin, Polk Street, Haight-Ashbury, South of Market, the Mission and Valencia Corridor, and the Castro, where it remains centered to this day.

The women split the timeline in half, with Watson focused on the earlier decades up until 1965. One development she was especially taken by was the creation of sex space communities, such as bathhouses and cruising spots.

"The development of bar spaces has been documented so well and so has the homophile movements. But the cruising and hustling and kind of the edgy side of this history was fun for me to research," she said.

One section she added late in the drafting process was on the National Union of Marine Cooks and Stewards, a left-leaning group that supported men discharged from the military for homosexuality being hired for jobs in the maritime industry.

"I had no idea about it. I went and looked again at Allan Berube's work," said Watson, referring to a local gay historian who had begun looking into the union's history prior to his death in 2007. "He was the only historian to document it in detail."

In her section detailing the more recent decades of LGBT history, Graves said one chapter she particularly found compelling centers on the work of the Langley Porter Clinic at UCSF, which she writes in the report was responsible for San Francisco becoming "an important center for the study of gender and sexuality in the 1940s and 1950s."

"It looms pretty large in transgender history, not just in the Bay Area but nationally," said Graves.

Two eras she documented that Graves found especially powerful were the early gay liberation movement and the early years of the AIDS epidemic.

"A lot of the early gay liberation activists saw their work intimately tied to the work against racism and for economic justice for a new world. That was very inspiring," she said. "In some ways, it echoes the kinds of complex issues about power we are trying to deal with today in San Francisco. Another part that was emotional to research was, of course, the AIDS section. I do think there could and should be more ways to make that story public for people."

To assist in the preservation and land-marking of important LGBT sites, the women created a how-to guide on how to navigate the city's historic landmark designation process as well as how to petition both the California Office of Historic Preservation and the National Register of Historic Places to list a property on their registries.

The women concluded the report with five recommendations for further action to be taken to preserve and highlight the city's LGBT history. Their suggestions include funding a citywide LGBTQ cultural heritage survey to create a comprehensive list of properties worthy of recognition and pursuing the registration of such sites as local landmarks or landmark districts and by the state and federal governments.

Another idea they promote is for the city to install a historical plaque, and/or interpretative display, at sites where the historic property?is now gone.

Both women pledged to ensure their report doesn't merely gather dust on a shelf at City Hall and intend to advocate for the land marking of various sites.

"Hopefully, it will have a life as a tool for the planning department to check against as they are looking at potential development in San Francisco," said Graves. "Likewise, the city, I think, might elect to assign either staff or resources to nominate sites as landmarks based on the research."

In delivering the completed document to the city and the community, Watson said she and Graves feel like they are also "passing the torch" on to others involved in pushing for official recognition of San Francisco's LGBT history.

"I think the fact this is going to be a part of the official city record ... you take a step back and it is pretty special. Because not too long ago, this would have been unthinkable," said Watson. "On a personal level, I have been working on historic preservation for a while as a historian and a member of this community. This is my first time to research and document my own history so that is pretty special."

A copy of the LGBTQ historic context statement can be downloaded online at http://www.sf-planning.org/index.aspx?page=3673