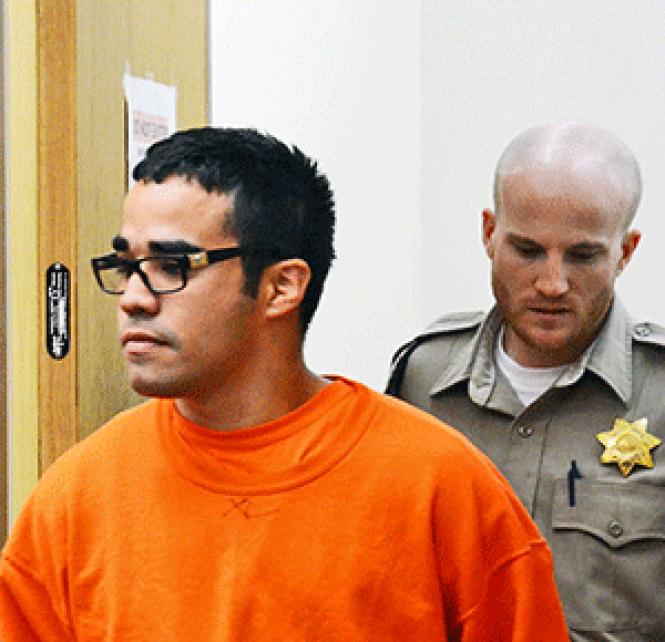 David Diaz is led into court for his arraignment Monday, January 26  (Source:Rick Gerharter)

A San Francisco man convicted of accidentally choking to death his sexual partner in 2011 pleaded not guilty this week in a case that involves at least one recent fire in the Castro.

David Munoz Diaz, 25, pleaded not guilty Monday, January 26 before San Francisco Superior Court Judge Ethan Schulman to charges that he burned the Up Hair salon at 4084 18th Street January 17 and set fire to his boyfriend's silver Hyundai December 21, along with a count of possession of an incendiary device.
David Diaz, left, and his boyfriend, Larry Metzger, vacationed in Mexico in late December with dog Patch. Photo: From Larry Metzger's Facebook page

Diaz's boyfriend, Larry Metzger, owns the Mix bar, 4086 18th Street, which is below the salon. Diaz and Metzger were living in an apartment in the same building at the time of Diaz's arrest Wednesday, January 21. The felony complaint against Diaz doesn't say where Metzger's car was when it was burned.

Several other suspected arsons, including incidents where a home and several cars were burned, have occurred in the Castro in recent months.

"The investigation is ongoing as investigators continue to review information which may link Diaz to additional arson incidents," police said in a news release announcing Diaz's arrest.

During his trial last summer, Diaz testified about how he fatally choked Freddy Canul-Arguello, 23, in Buena Vista Park in June 2011. He said it was an accident that occurred after Canul-Arguello asked to be choked during a sexual encounter.

He also said he set fire to a cup in a recycling bin but said he did it to signal for help. The melted bin was found with Canul-Arguello's heavily charred body.

Diaz was released in September after spending more than three years in custody.

Diaz, who's back in custody on $500,000 bail, looked grim as he was escorted into court Monday with his hands cuffed behind his back.

Assistant District Attorney Andrew Clark said prosecutors weren't asking for a criminal protective order for Metzger. Clark noted Metzger was in court, and said he's "in support of Diaz" and "not interested" in such an order.

In an interview Friday, January 23, Lilien, who again is representing Diaz, said he hadn't seen any of the evidence in the new case.

He said it appears that there's "circumstantial evidence" that has Diaz "in the vicinity or in the bar at some time prior to the fire on the second floor."

Lilien said that his understanding is that police seized the digital video recorder from the Mix, and computers and clothing from Diaz's residence. He said he didn't have details related to the burning of Metzger's car.

"My understanding is the police talked to him the day before they arrested him," Lilien said. "I think he knew there was video of him in the bar prior to the fire happening nearby," but "he didn't go anywhere."

Diaz has been "insistent he wasn't responsible," Lilien said, and "I have trouble imagining him running around lighting fires."

Over the time that Diaz appeared in court for the 2011 killing, he had appeared mild-mannered, and Lilien has referred to his client as "a sweet kid."

Lilien said Friday, "I really was very optimistic for him. I'm honestly pretty surprised" by the arrest last week. He said things had been "going well" for Diaz, who'd been studying English and math in college, and had "a good support system."

When the Bay Area Reporter tried to visit Diaz in jail last Thursday afternoon, January 22, a sheriff s department staffer said that Diaz is "refusing to speak to the media."

After Monday's hearing, Lilien told reporters he couldn't say "a whole lot more" about the evidence in the new case.

In an email exchange, Officer Albie Esparza, a police spokesman, said, "We do have at least one video. We are not able to discuss evidence as this case is in the courts."

Asked whether police were investigating Diaz in connection with fires that occurred in the Castro in 2011, Esparza said, "We are still investigating other cases."

Diaz's next court date is February 24 for a prehearing conference.

Sullivan's dismissal of the arson conviction has drawn media attention in recent days.

At Diaz's sentencing, the judge considered that keeping that count would require Diaz s "lifetime registration as an arsonist," which would "mar his character."

He acknowledged Diaz's youth, that he had no prior criminal history, and indicated he agreed with Lilien that "the likelihood of [Diaz] committing such crimes in the future" was "extremely unlikely."

Friday, Lilien said the facts presented in the 2011 case "were pretty unique."

Diaz had set that fire after "a fairly traumatic and stressful event. ... The judge had heard all the evidence. It didn't really seem like other cases" where "people are lighting fires for the sake of lighting fires."

Even if the arson charge hadn't been dismissed in November, Lilien said, Diaz "wouldn't have done any more time." He'd already served the time he could in the case.

"He wasn't given a break," Lilien said of the judge. "This was not like an ill-conceived deal he got. This was pretty well-explored."

Speaking to reporters Monday, Alex Bastian, a spokesman for the district attorney's office, said that Sullivan's dismissal of the arson charge had added "insult to injury."

Bastian said that the judge had wanted to save Diaz from the "undue burden" of being a registered arsonist, but now that "burden" rests on the city.

An Up Hair worker who said he didn't want his name published because the owner had instructed him not to talk about the fire said his hair products stored in a backroom cabinet had been destroyed, among other damage, but the salon was still open for business.

He said the blaze had occurred in "the middle of the night." The salon doesn't have a video surveillance system, he said, and it wasn't clear if someone had forced entry into the shop.

The man said he had occasionally seen Diaz in passing, and he'd been "very quiet and pleasant." He said he had "no idea" what the motive may have been for the fire, and nobody from the salon had had any altercations with Diaz.

He also didn't know of Diaz and Metzger having any troubles between each other. He'd last seen Diaz at the building Monday, January 19.

"Everything seemed pretty normal," he said

Lilien said there's "no indication" that there had been a fight between Diaz and Metzger. "They were living together. ... They were doing great."

An online search of superior court records didn't indicate any trouble between the two men.

Metzger attended many of the hearings in the 2011 case and the trial, and he accompanied Diaz to his sentencing in November. He declined requests for comment on the current charges against Diaz.

"I'm not going to talk to you," Metzger told a reporter as he left his home last Thursday.

According to a motion Lilien filed in the previous case, Diaz isn't a U.S. citizen but a legal permanent resident. Diaz, who was assisted Monday by a Spanish interpreter, is originally from Mexico.

Asked Friday about the risk of his client being deported, Lilien indicated he didn't know the specific chance of that happening, but said, "There's always a risk when someone is not a U.S. citizen and there's criminal charges."

A conviction of arson of an inhabited structure alone can result in a maximum sentence of eight years in state prison plus lifetime registration as an arsonist.