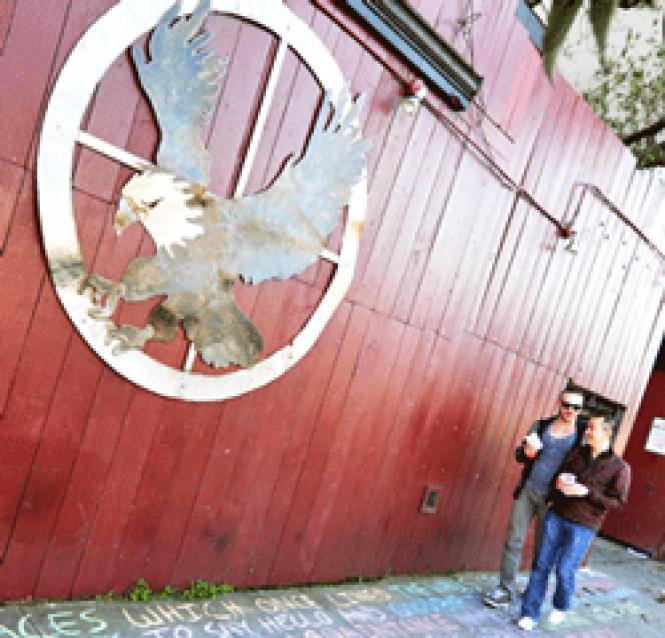 A deal to open a bar at the former Eagle Tavern space South of Market has apparently collapsed. (Photo: Rick Gerharter)

The future of the former Eagle Tavern is in doubt once again as the people who had hoped to take over the long-vacant space at 398 12th Street are backing out of the lease.

In response to emailed questions Tuesday, August 21, Anderson Pugash, founder of Crossroads Entertainment and one of the people who had signed a lease on the site, said, "We would still love to work on this project as we believe in the history and potential of the space, however we are having trouble agreeing over the cost of the delay with the landlord so it's unlikely we will be the operators."

The news comes just a week after a community meeting was held to discuss new plans for the bar.

Pugash and his partners are only the most recent people to try to work out a deal on re-opening a venue at the Eagle site.

The bar was well known for its Sunday afternoon fundraisers, which raised money for numerous LGBT organizations over the years. The venue closed in April 2011 after a rent dispute between landlord John Nikitopoulos and the bar owners.

Late last month, the Board of Supervisors City Operations and Neighborhood Services Committee put off a vote on whether to recommend to the full board the transfer of a liquor license to the space. The matter was continued to September 24 so the project organizers could do outreach to the community.

Last week, Eli Spear, one of the people who had been working with Pugash to try to re-open the space, indicated at a public meeting that the hopeful operators wanted to maintain the bar as a space inviting to LGBTs.

Pugash, who first spoke to the San Francisco Chronicle 's Inside Scoop SF about the deal's collapse, said Nikitopoulos still owns Double Rainbow LLC, which has been trying to transfer a liquor license to the former Eagle site. Nikitopoulos will hold the license, and any new tenant would have to have the limited liability company and the liquor license transferred into their name, Pugash said. Nikitopoulos hasn't responded to numerous interview requests over the past several months, and he couldn't be reached for comment Wednesday morning, August 22. As of Wednesday, the California Department of Alcoholic Beverage Control website listed the license application as "pending."

Pugash wouldn't say how much he and the others would be paying for the space.

However, he said, "We did have high rent and key money in addition to high capital costs and we agreed to take these on because of our passion for the space."

The venue requires "major" improvements related to the Americans with Disabilities Act, a new roof, and other work, in addition to "usual items" such as sound and bar equipment, Pugash said.

He added, "This is an expensive, highly risky and complex project, so anyone who wants to open a business there will need extensive construction, operational, and political experience. This limits the field of qualified potential buyers in my opinion, but I am hopeful and optimistic that someone will re-open the space."