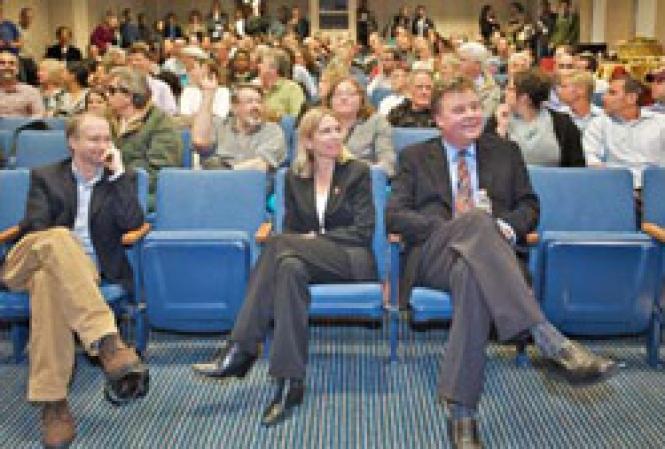 A standing-room only audience packed Carr Auditorium at San Francisco General Hospital on Tuesday, April 13, to hear about the city's new policy recommending treatment for all people diagnosed with HIV regardless of CD4 T-cell count.

As first described in an April 2 article in the New York Times, the policy change reflects a shift from delaying antiretroviral therapy until a person's immune system sustains significant damage to encouraging everyone to receive treatment as soon as possible.

"Based on accumulated data we believe all HIV-infected persons should be treated with antiretroviral therapy unless there is a strong reason not to," Department of Public Health Director Dr. Mitch Katz told the Bay Area Reporter. However, he added, "We don't dictate medical practice by policy; no one will be in the examination room other than the patient and the provider."

SFGH's Positive Health Program (Ward 86) implemented the change over the past few months after a discussion among staff providers in January, according to medical director Dr. Brad Hare. Katz indicated that the new policy also applies to other city facilities such as the Castro-Mission Health Center and the Tom Waddell Clinic.

The new policy is supported by a growing body of evidence showing that early HIV treatment helps prevent a host of non-AIDS complications that can occur long before a person's CD4 cell count falls into the danger zone for opportunistic infections.

Recent research has clarified that HIV has detrimental effects from the earliest stages of infection.

"We now know that from the start HIV is causing damage to more than just the immune system," explained Dr. Diane Havlir, chief of the UCSF Division of HIV/AIDS at SFGH. "The virus is causing damage to multiple organs - including the heart, liver, kidneys, and probably the brain - even when a person has high CD4s and feels fine."

When to start HIV treatment has been a controversial issue since the early years of the epidemic. Soon after the advent of combination antiretroviral therapy, some researchers proposed a "hit early, hit hard" strategy, hoping very early therapy could eradicate the virus. As it became apparent that the drug cocktails caused long-term side effects including body shape changes and metabolic abnormalities, the pendulum swung in the other direction, with patients and providers seeking to delay treatment as long as possible.

In 2006, the large SMART trial, which was designed to see if people could safely stop therapy when their T-cell count was high in order to minimize drug exposure, found exactly the opposite. Participants who took treatment breaks when their CD4 cell count rose above 350 not only had more AIDS-related opportunistic infections, but also more non-AIDS complications including heart, liver, and kidney disease, as well as a higher risk of death due to any cause.

This past December, a panel of experts updated the U.S. Department of Health and Human Services antiretroviral therapy guidelines to recommend earlier treatment, raising the threshold from 350 to 500 CD4 cells; above this level the panel was evenly split, with half favoring treatment initiation and half saying it was optional.

In the years since the SMART report numerous studies have implicated excess immune activation and inflammation as a likely cause of non-AIDS complications.

"We should perhaps think of AIDS as acquired inflammatory disease syndrome," suggested Dr. Steve Deeks, also with the UCSF Division of HIV/AIDS. "From the get-go HIV is causing high level inflammation and inflammation-associated disease. Antiretroviral therapy can help people live longer, but it does not restore health and they do not have a normal lifespan." What's more, people with HIV appear to be aging faster than their HIV-negative peers.

"Five years ago we said drugs are no fun and we should wait, but the consequence of waiting is that people develop irreversible harm to the immune system," Deeks continued. "The old paradigm was that drugs are toxic so we should wait as long as possible. The new paradigm is that while today's drugs are not totally benign, they are less toxic than the virus."

Deeks acknowledged that much remains to be learned, but prefers to err on the side of treating too early.

"If I'm wrong, we'll start people [on treatment] a couple years earlier than we otherwise would. But if I'm right and we don't start early, there's no going back," he said.

While the city's policy change was motivated by what's best for individual patients, Katz noted that earlier treatment may also help curb the spread of the epidemic.

"We believe from a public health perspective that early treatment will drive down community viral load and reduce [HIV] transmission," Katz said. "We know treatment doesn't eliminate transmission, but we believe this policy will ultimately result in fewer new infections."

Project Inform Executive Director Dana Van Gorder pointed out that none of the evening's panelists spoke for those who oppose earlier treatment for reasons ranging from lack of data to concerns about drug resistance, adherence, and cost.

On Monday, Project Inform issued the first statement in its 25-year history taking a position on when to start therapy.

"Based upon a careful review of currently available data, Project Inform believes that all HIV-positive people who are ready to begin treatment should start at least before their CD4 counts fall below 500," the statement reads. "Deciding whether to start treatment above 500 CD4s is an individual choice to be made with a qualified medical provider."

Not everyone agrees, however. New York's Treatment Action Group chose not to take a position until more data are available, including results from the START trial comparing immediate versus deferred therapy in people with high CD4 counts.

But START is not expected to produce data until at earliest 2015.

"When people come in with seroconversion, they want treatment," said Dr. Stephen Follansbee, director of HIV services at Kaiser San Francisco. "I don't want to wait, and I don't think our patients want to wait for data that might not even apply to them."

During the discussion following the panel presentations, most questions related to the added costs of expanded treatment - estimated at about $12,000 per person per year - and how to provide support to enable people to start and stay on therapy.

Hare suggested that the new policy probably would not lead to a large influx of people starting treatment. Of the more than 2,600 patients (500 of them new) seen at SFGH last year, just over 80 percent are already on therapy. The average CD4 cell count of people accessing care is 426, indicating that more than half would qualify for treatment even under the previous threshold of 350.

"Since the beginning of the epidemic San Francisco has always been on the leading edge," said Katz. "We've never debated about whether we think low-income people are entitled to the same advances as everyone else. There's one standard of care, whether you're on the hill at [UCSF] Parnassus, at Kaiser, or here at SFGH."

"We encourage people not to use lack of funding to avoid doing what is right, but to stand with us to advocate for more," Van Gorder added.

With regard to adherence and patient support, Hare acknowledged that "it can be an extreme challenge to get people to take even one pill a day when they don't know where they're getting their next meal or where they will sleep that night."

"If this is medically the right thing to do, it's even more imperative to provide support so people can take advantage of the best medical practices," he told the B.A.R. "We're not just saying [the new policy] is a done deal. We will keep a close eye on all aspects to make sure we're doing right by our patients."

David Foucher is the CEO of the EDGE Media Network and Pride Labs LLC, is a member of the National Lesbian & Gay Journalist Association, and is accredited with the Online Society of Film Critics. David lives with his daughter in Dedham MA.
Sign up!