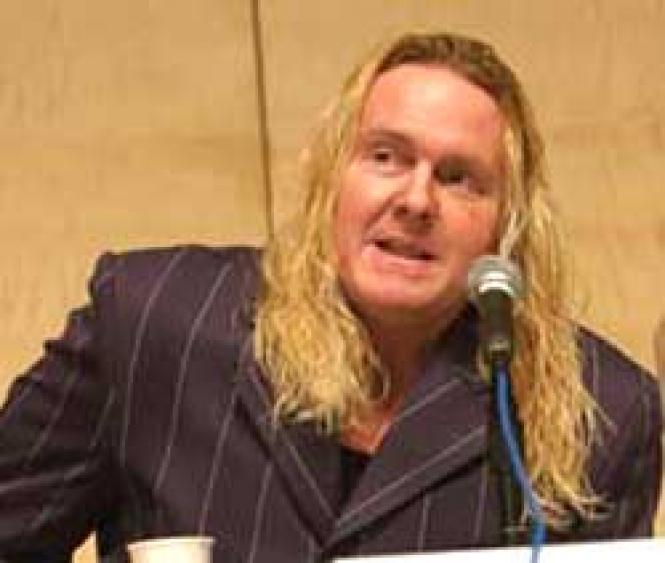 Powers decided to disclose his being transgender in the candidate statement he provided to the League of Women Voters, which organized the October 11 face-off between the candidates. According to the statement, Powers, 42, is married in a "conventional relationship" but identifies as transgender.

In an exclusive interview with the Bay Area Reporter this week, Powers disclosed that he is, in fact, in the process of divorcing his wife, whom he married this past spring, and plans to resume taking hormones and living life primarily as Michelle.

"I am Middlesex more than anything. I don't have a gender identity disorder. I don't want a vagina," said Powers, owner of the Power Exchange sex club. "I lived as a girl for a couple years. I have had a boyfriend and a couple I have dated who was married."

He said he hadn't brought up his being transgender in the past since he didn't feel it was relevant to his running for mayor.

"People already have enough to say about me for owning a sex club," said Powers. "I don't want it to be a topic of concern but I am willing to talk about it when asked. Most people on my staff know that alternative identity to me."

The Modesto native attended the same high school as famed filmmaker George Lucas and then served in the Army. He moved to San Francisco in 1994 and opened the sex club the following year. After closing the club's men only area earlier this year, he is in the process of revamping the fourth floor as a men's play space and expects to reopen it in November.

In recent months Powers said it became clear that he was more attracted to men and missed living life as a woman.

"I realized a man in my life is better for me than a woman," he said. "A lot of people who go into that role of transgenderism, a lot of guys go because they say 'I couldn't find her so I became her.' I think that is my thing."

He said he doesn't like masculine attributes and prefers the feminine side of his personality.

"I don't like the body hair that comes with being a guy," said Powers, who stopped taking hormones seven months ago.

He is the father to two children from a previous relationship, a 21-year-old son and a 10-year-old daughter. He met his current wife while living as a woman but said he transitioned back to being a man at her request.

"She coerced me back to being just Michael. She left me three or four weeks ago," said Powers, who intends to file his divorce papers after the election. "It was because of my transgender identity."

Powers, who showed up an hour late to the forum last week, said he did so as a way to protest Mayor Gavin Newsom's avoiding any real debate with his opponents. The mayor and his 11 challengers on stage had very little time to answer questions and had no chance for rebuttal.

"It is a coronation instead of an election," said Powers, who said he told the San Francisco Chronicle "in jest" that his tardiness was due to misreading his clock.

David Foucher is the CEO of the EDGE Media Network and Pride Labs LLC, is a member of the National Lesbian & Gay Journalist Association, and is accredited with the Online Society of Film Critics. David lives with his daughter in Dedham MA.