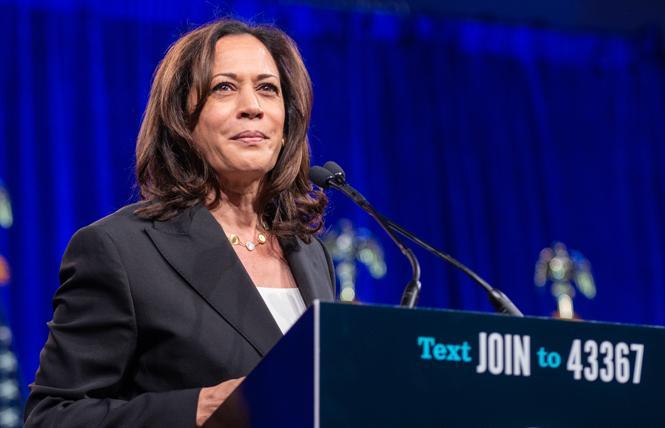 "I'm not a billionaire. I can't fund my own campaign," Harris wrote in a statement released to supporters and the press. "And as the campaign has gone on, it's become harder and harder to raise the money we need to compete."

Harris had qualified for the December debate but, in polling, her consistently fifth or sixth place stature had shown signs of eroding, slipping from a high of 20% to 2% as of December 1.

In her statement, Harris, a former San Francisco district attorney and California attorney general, said it was with "deep regret — but also with deep gratitude — that I am suspending my campaign today." Articles over the weekend in the New York Times and the Washington Post described a campaign in turmoil, with staff layoffs and indecision on how to proceed.

"Eleven months ago at the launch of our campaign in Oakland, I told you all: 'I am not perfect," she wrote. "But I will always speak with decency and moral clarity and treat all people with dignity and respect. I will lead with integrity. I will speak the truth.'

"So here's the truth today. I've taken stock and looked at this from every angle, and over the last few days have come to one of the hardest decisions of my life," she added.

Harris, 55, did well with LGBT voters. A study of campaign contributions from heavily LGBT ZIP codes showed her the second strongest fundraiser, behind gay candidate Pete Buttigieg, the mayor of South Bend, Indiana.

Gay state Senator Scott Wiener (D-San Francisco), an early backer of Harris, told the Bay Area Reporter he was sorry to see her exit the race.

"Kamala would be a fantastic president, and I'm proud to have supported her," he wrote in a text message. "Her withdrawal is disappointing, but she has a bright future in politics. I look forward to working with her for the people of California."

Speculation had been rampant that Equality California, the statewide LGBT rights group, would endorse Harris in the race. She was the featured guest at its party during last month's state Democratic Party convention in Long Beach.

"Kamala's historic campaign has already inspired millions of young people — young women and people of color, in particular — across the country," EQCA Executive Director Rick Zbur wrote. "As a half-black, half Indian daughter of immigrants competing at the highest level, she has paved the way for future generations of leaders to run for office, too."

Zbur said that Harris "represents the very best of the Golden State and what we have to offer — a passion for justice, a commitment to equality, and an unbroken spirit. While we are sorry to see her leave the race, our hearts are filled with pride knowing she'll continue to fight for us in the United States Senate."

Money woes
At the end of the last reporting period, September 30, Harris had about $9 million in her campaign coffers; Buttigieg had $23 million. Former Vice President Joseph R. Biden Jr., who continues to lead in national polls, had only $9 million in his campaign chest at the end of September, according to Federal Election Commission reports.

Harris launched her campaign in January in Oakland, with a rally attended by more than 20,000 people. She ended it Tuesday, writing in an email to supporters, "although I am no longer running for president, I will do everything in my power to defeat Donald Trump and fight for the future of our country and the best of who we are."

Harris said that she is still "very much in this fight," and said she would continue working for people's voices to be heard. She was first elected to her Senate seat in 2016 and will be up for re-election in 2022.

As recently as Monday night, the Harris campaign was sending out routine news releases, announcing endorsements. Early Monday afternoon, the campaign issued a news release announcing that California Governor Gavin Newsom (D) would be campaigning for Harris in Iowa December 14 and 15. Newsom, a Democrat, endorsed Harris in February.

"Kamala Harris is exiting the way she entered — with grace, grit & a love for America," Newsom tweeted Tuesday. "She campaigned fiercely & never lost sight of those who matter most — families who deserve their shot at the American Dream. My faith in her remains stronger than ever. The best is yet to come."

Harris had polled in third place early in the year, behind Biden and Senator Bernie Sanders (I-Vermont), and she experienced a surge of support following the June debate when she confronted Biden over his pride in having worked with segregationists "to oppose busing." But Senator Elizabeth Warren (D-Massachusetts) and Buttigieg soon had their own surges and quickly leap-frogged over her.

Harris was one of the few Democratic presidential candidates to release her own plan addressing a wide range of LGBT issues. Among other things, she said she would appoint a "chief advocate for LGBTQ+ affairs" at the White House and fund a new office to help various federal agencies in their work with the community.

Harris becomes the third Democrat to drop out of the race in recent days, though several others have left the primary field in the last few months. Among the more high-profile departures are former Texas congressman Beto O'Rourke and New York Senator Kirsten Gillibrand. Montana Governor Steve Bullock quit the race Monday, and former Pennsylvania congressman John Sestak ended his campaign Sunday.