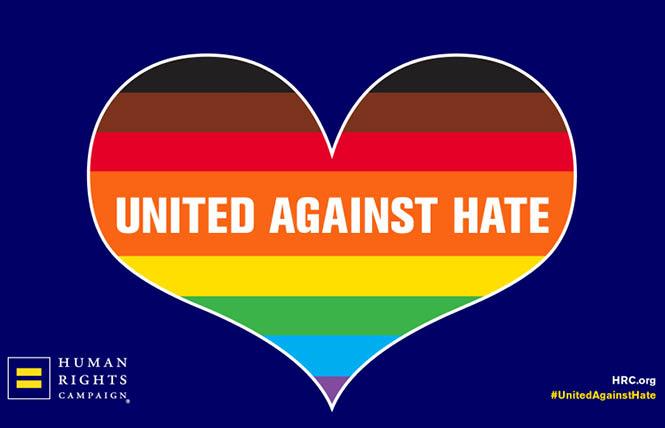 Reported hate crimes in San Francisco rose 58% in 2018 over the previous year even as hate crimes nationwide leveled off after years of increasing, according to statistics released by the FBI Tuesday, November 12.

The 2018 data, submitted by 16,039 law enforcement agencies, provide information about the offenses, victims, offenders, and locations of hate crimes, according to an FBI summary.

But Patrice O'Neill, the Oakland-based co-director of United Against Hate Week (which spans November 17-23), said in a phone interview with the Bay Area Reporter that the FBI's numbers are "just the tip of the iceberg" — and said that they represent "only a fraction of the hate crimes that actually occur."

"San Francisco police do a better job than many agencies around the country," O'Neill said. "I've had friends who were targeted who have never reported it."

The numbers bear that out — all 7,120 incidents covered in the FBI statistics came from just 12.6% of the law enforcement agencies that participated. The remainder, 87.4%, didn't report any hate crimes at all for 2018.

Locally, United Against Hate Week kicked off with the announcement Monday, November 18, that a technological supplemental hate crime reporting system will be introduced in Novato, to be available in English and Spanish.

"The epidemic of violence against LGBTQ people and specifically against transgender women of color is staggering, and it is something we must address head-on," David, the leader of the nation's largest LGBT rights organization, said. "For that to happen, we need mandatory hate crimes reporting across the country, better training for law enforcement officers to recognize bias-motivated crime and greater inclusion and equity in our communities."

Henderson said that reporting numbers are likely inaccurate because people often feel "disempowered" after being the victim of a hate crime. He attributed the rise in reported hate crimes over the last several years nationwide to the rhetoric coming out of the Trump administration.

"If you read the tweets and look at the legislation and the rhetoric coming out of the federal government, you get the sense that it is open season," Henderson said.

"Racism and intolerance have been unleashed at the highest levels of our government," she said. "We see dehumanization, the filters are off, and what we worked so hard for in changing societal norms has been blown apart."

Henderson said that agencies need to do more than just collect data — they need to figure out how to respond proactively to it.

"Thank you, FBI, for letting us know. What is your response to that?" Henderson asked.

"You actually have to have a response besides just collecting data. What's the follow-up?" Henderson added.

For her part, O'Neill said she hopes LGBT people are on the front lines of reporting.

"The LGBT community can take the lead in spreading the word," she said. "We can't stop hate crimes unless we know where and when it's happening. We're asking people to have the courage to report."