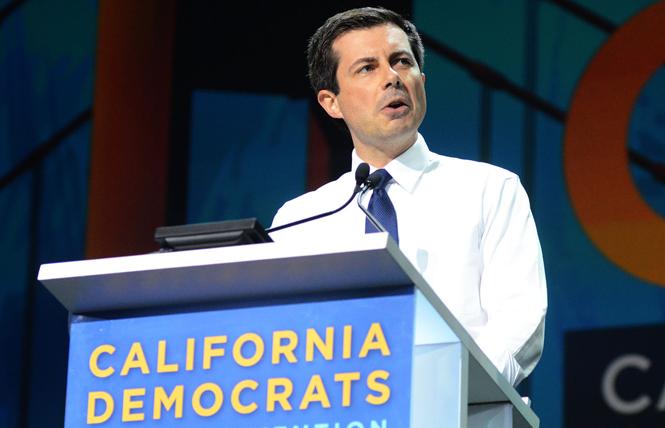 This may not be a surprise, but it is news: Gay presidential candidate Pete Buttigieg has outraised his Democratic competitors in most heavily LGBT neighborhoods around the country.

And he is now the third largest fundraiser among the 23 major candidates for the Democratic nomination. But the data, and an examination of who has given money, suggests that the LGBT community is keeping significant support behind other major Democratic presidential candidates and that the community's potential has much room for growth.

According to Federal Elections Commission's reports through the second quarter (June 30), Buttigieg had raised $32 million, behind Senators Bernie Sanders (with $46 million) and Elizabeth Warren ($35 million).

An analysis of dollars to Democratic candidates in 40 ZIP codes known to have heavily LGBT populations indicates that Buttigieg raked in 38% of the total dollars. He was followed by Senator Kamala Harris (with 22%), Warren (18%), Sanders (13%), and former Vice President Joseph R. Biden Jr. (9%).

Contributions in ZIP code areas considered heavily lesbian were a little different: 31% gave to Warren, 22% each to Buttigieg and Sanders, 19% to Harris, and 5% to Biden.

Buttigieg was the top dollar collector in 23 of the 40 heavily gay ZIP codes.

In heavily LGBT ZIP codes where another Democratic candidate raised the most money, there was usually a home-state advantage. For instance, Warren (Massachusetts) raised the most in Northampton and Wellfleet, Massachusetts; Harris (California) took two ZIP codes around Oakland, California; and former Representative Beto O'Rourke (Texas) outraised everybody in the LGBT districts of Oaklawn in Dallas and Montrose in Houston.

But there were some surprises.

Warren was the top dollar fundraiser in three New York City ZIP codes. All three — Park Slope, Prospect Heights, and Boerum Hill — have large concentrations of female same-sex households, according to census records. She also won top dollar in the heavily LGBT neighborhood of Kerrytown near Ann Arbor in Michigan.

Buttigieg collected the most small-dollar donations from the Castro area of San Francisco. Of the roughly half-million dollars raised there, 42% went to Buttigieg, 29% to Harris, and 16% to Warren.

Provincetown, Massachusetts gave only $95,000 to Democratic candidates, but 86% of the small dollars went to Buttigieg (and 9% to Warren).

Ah, the caveats
These numbers do not mean that the LGBT vote is reliably behind Buttigieg.

First, the dollar counts are just that: dollars, not votes.

Second, not all LGBT people live in ZIP codes with heavily LGBT populations.

Also, the data on contributions by ZIP code represents only "small-dollar donations." It originated with a Democratic political action committee that runs the ActBlue fundraising website. ActBlue.com provides a way for people who want to support Democratic candidates and organizations to give small-dollar amounts (less than $200) quickly and easily. In the first six months of 2019, the PAC raised $345 million that way.

Several major media organizations, such as the New York Times and the Los Angeles Times, have processed the ActBlue raw data from the FEC in ways that illustrate how well each Democratic candidate is doing in getting individual donors and how well each is raising money in each ZIP code. The New York Times, for instance, discovered that Buttigieg has the third largest number of individual donors through ActBlue (390,000). That puts him behind Sanders (746,000) and Warren (421,000) but ahead of Harris (277,000) and Biden (256,000).

When looking at FEC reports, which count both small-dollar contributions and contributions of $200 and above, Buttigieg raised $32 million, putting him in third behind Sanders ($46 million) and Warren ($36 million).

Finally, a search through FEC records for the names of individual LGBT leaders, well-known activists, and celebrities found that only 19 out of 100 had made a reportable contribution to any Democratic presidential candidate so far. Given that the FEC records the names of only those donors who give $200 or more, the other 81 might have given contributions of less than $200. Barring that, the numbers suggest that LGBT leaders, generally speaking, are not yet ready to go "all in" behind one Democratic frontrunner just yet.

Of the 19 who had given to a Democrat:

Only five had given the maximum ($2,800) to any one candidate for the primary. Former assistant secretary of the U.S. Department of Housing and Urban Development and San Francisco supervisor Roberta Achtenberg has given $2,800 to Harris and four others — comedian Ellen DeGeneres, film producer David Geffen, former president of the U.S. Export-Import Bank Fred Hochberg, and current Fort Lauderdale, Florida Mayor Dean Trantalis — have all given $2,800 to Buttigieg.

Six had given to Buttigieg and at least one other of the top-tier candidates.

The next round of campaign funding reports is due into the FEC on September 30. Meanwhile, the latest national polling shows Buttigieg may have slipped in the standings. In mid-June, a Fox News poll of more than 400 Democratic primary voters found the South Bend mayor at 8%. In mid-July, the Fox poll found him at 5%. And in mid-August, he's tied with Senator Cory Booker of New Jersey and businessman Andrew Yang at 3%. (Margin of error is 4.5 points.)

An averaging of all national polls calculated by RealClearPolitics.com shows Buttigieg still hanging on to fifth place with 5.2%, behind Biden with 30.5%, Warren with 17.3%, Sanders with 16%, and Harris with 8%.