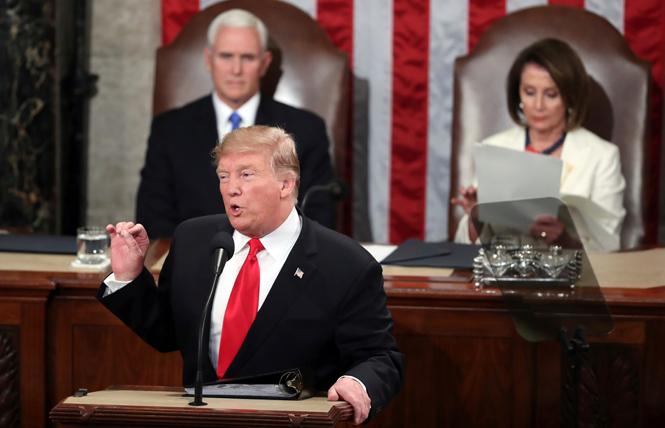 President Donald Trump's second State of the Union address painted a rosy picture of the United States Tuesday night: a country on the brink of an "economic miracle," peace, and helpful legislation for things like the eradication of HIV/AIDS, which was met with skepticism from many LGBT HIV/AIDS leaders.

Trump said nothing to recognize the LGBT community or to repeat his 2016 campaign promise to protect the community. And while his address promised that his budget would seek "to make the needed commitment to eliminate the HIV epidemic in the United States within 10 years," he offered no dollar figure or specifics.

"The last time President Trump promised to help our community," said Lorri L. Jean, CEO of the Los Angeles LGBT Center, "was in his campaign when he said he would fight for our freedoms and beliefs. But since taking office, he has done nothing but roll back our protections, foment discrimination against us, and appoint anti-LGBT ideologues to administration positions and as judges at every level."

Officials at the San Francisco AIDS Foundation sent out a response that said the administration's own actions cast doubt on the president's pledge to end HIV/AIDS.

"President Trump's wish to end new HIV infections is inconsistent with the policies and practices of his administration," stated Joe Hollendoner, SFAF's CEO. "The repeated attempts to dismantle the Affordable Care Act, attacks on human rights, promotion of abstinence-based education, and opposition to safe injection services has impeded our country's progress to end HIV infections and AIDS-related deaths."

Locally, there are concerns about the financial impacts of the new initiative. Gay District 8 Supervisor Rafael Mandelman noted that San Francisco has seen its share of Ryan White funding diminish for years. The city has backfilled the loss in federal funds with local revenues; how much will be needed this year has not been disclosed.

"We have a real strong commitment to maintain funding, and so, we are going to see where the federal government lands and what we need to do to take care of prevention services and help folks living with HIV," said Mandelman. "It is a very good thing Nancy Pelosi is speaker of the House. Happily, we no longer live in a dictatorship and there is a separate Democratic voice with some power in Washington."

We'll be watching the #SOTU tonight, but let's get one thing straight: the Trump-Pence Administration does NOT care about people living with HIV/AIDS. Their agenda and actions have proven that. https://t.co/iuSCSmAuDP— Equality California (@eqca) February 5, 2019

Others were more optimistic.

Jerri Ann Henry, executive director of the national Log Cabin Republicans, said she was "thrilled" to see Trump including HIV/AIDS in his State of the Union address.

"We have long been advocates for increased research and solutions for the crisis," said Henry. She noted that she published an opinion piece in December in the Hill newspaper "outlining some of the opportunities for the White House to take the lead on HIV/AIDS research," said Henry. "I'm happy to see the White House heard us and agrees."

Charles Moran, a gay businessman in Los Angeles who was a Trump delegate to the Republican National Convention, said he expects Trump's plan to eradicate HIV/AIDS to be a "global game-changer."

"If this 10-year project is successful, it lays a solid template that could be used in other countries for containment, treatment, and education," said Moran. "Politically, it's a recommitment to the LGBTQ and urban communities."

But some AIDS experts worry that the president does not have a "plan." He did not offer a dollar figure for his HIV plan, even though he did specify that Congress should appropriate $500 million over 10 years to fight childhood cancer (a number that many will find low compared to the $5 billion he wants this year to build a "steel barrier" along the border with Mexico).

Scott Schoettes, HIV project director for Lambda Legal Defense and Education Fund, said, "Ending the AIDS epidemic in the United States by 2030 is a solid and ambitious goal ... But the announcement of a goal is meaningless without a solid plan and action to back up that plan. To date, the Trump administration has shown little inclination to create such a plan or to take the actions necessary."

Jean, whose LA center is the largest LGBT health provider in the nation, said Trump's promise is "just another lie by our president in an effort to mislead the public about his true intentions."

Ernest Hopkins, director of legislative affairs at SFAF, said in a statement that the agency is ready "to work together to build sound strategies, identify critical areas for funding, and remove policy barriers."

But he said any nationwide strategy "must also include plans for global HIV reduction initiatives..."

Pelosi, who talked about HIV/AIDS in her first floor speech as a freshman lawmaker from San Francisco decades ago, issued a statement following Trump's speech.

"The president's call for ending HIV transmission in America is interesting, but if he is serious about ending the HIV/AIDS crisis, he must end his assault on health care and the dignity of the LGBTQ community," she said.

In the Democratic response to the State of the Union address, Georgia Democrat Stacey Abrams, who narrowly lost the governor's race last fall, talked about the importance of the ACA and noted that the "LGBTQ community remains under attack," despite recent gains in marriage equality.

Other issues
Trump started his remarks by saying the country is threatened by the "urgent national crisis" of "mass illegal migration" and "foolish wars, politics, or ridiculous partisan investigations."
"If there is going to be peace and legislation," said Trump, whose administration is the subject of numerous investigations, "there cannot be war and investigation."

Bisexual Congresswoman Katie Hill (D-California), a first-term member of the House who has just been elected vice chairman of the House Oversight committee, told MSNBC's Rachel Maddow after the address that Trump's statement about the investigations was "scary."

"This is the kind of dangerous rhetoric that we've been hearing over and over again," said Hill.

Trump spent an unusual amount of his 90-minute speech pointing out invited guests in the House visitors' gallery and telling their dramatic stories of heroism and courage. There were World War II veterans, astronaut Buzz Aldrin, a 10-year-old girl with brain cancer who raised money for St. Jude's Hospital, a SWAT officer who chased down the Pittsburgh synagogue shooter, a Holocaust survivor, and the father of a sailor lost to the terrorist attack on the USS Cole, to name a few.

He said nothing to recognize any person with HIV or an AIDS activist, nor did he acknowledge the many transgender service members who were in the gallery Tuesday night.

Pelosi invited two active duty transgender members of the U.S. Army as her guests to the State of the Union address, and a number of other members did too, including presidential candidate Senator Kirsten Gillibrand (D-New York) and Representatives Jackie Speier (D-San Francisco/San Mateo) and Donald McEachin (D-Virginia).

LGBT caucus guest list
Members of Congress often invite constituents to be their guest at the State of the Union address as a way to highlight an issue the member is particularly concerned with. Here are some guests invited by LGBT members of Congress:

Proud to have Major Bouchard with me at #SOTU. His service is inspiring; he bravely fought for our country and now helps fellow Arizona veterans. I'll keep fighting every day for veterans like Major Bouchard and their families. pic.twitter.com/COTVAoYGO0

Here with Chrissy, my #SOTU guest. She's the greatest example of who I'm in Congress to fight for — so grateful she's by my side tonight. pic.twitter.com/srYI0DTs3h— Katie Hill (@KatieHill4CA) February 6, 2019