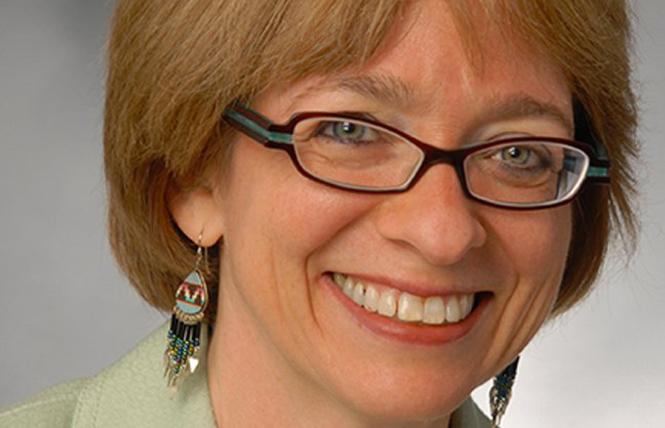 The first openly LGBT member of the U.S. Equal Employment Opportunity Commission has been denied a third term by a Republican senator who claims she has "radical views on marriage" and wants to use the agency as a "tool to stamp out religious liberty."

Chai Feldblum, a lesbian and longtime advocate for civil rights protections for LGBT people, people with disabilities, and others, has served two terms on the five-member EEOC, the federal agency charged with enforcing the nation's employment civil rights laws.

At the behest of Senate Minority Leader Charles Schumer (D-New York) in December 2017, Republican President Donald Trump nominated her for a third term. (By long-standing Senate tradition, Senate party leaders recommend nominees to federal agencies and the president divides the vacancies between the two parties, giving a numerical edge to the majority party.) Along with Feldblum, Trump nominated two new Republican members.

Right-wing conservative groups objected vehemently to Feldblum's re-nomination and suggested Trump's staff must have forgotten to brief him about the nominees.

"The last thing this president wants on his EEOC is an arch enemy of his agenda on religious liberty," wrote Tony Perkins, head of the Family Research Council in December 2017. "Even if the commission is required to have a certain number of Democrats, the White House doesn't have to take just anyone (or, in this case, the worst possible option)."

In March, the American Family Association set up a web-based petition to "Tell President Trump to withdraw liberal EEOC nomination," characterizing Feldblum as "a threat to religious liberty."

Trump did not withdraw the nomination, and some may have expected Feldblum would be confirmed through a routine voice vote of the three-person slate.

Instead, Senator Mike Lee (R-Utah) put a block on the voice vote (known as unanimous consent), saying Feldblum wanted to use the EEOC to "undermine our nation's founding principles" around religious liberty.

As the countdown to her term expiration neared its end, Lee gave a floor speech December 19, saying that he and other senators objected to Feldblum's re-confirmation because she was an "activist intent on stamping out all opposition" to LGBT rights and that "the federal government should never be used as a tool to stamp out religious liberty...."

Lee said, "Ms. Feldblum has written that she sees a conflict between religious belief and LGBT liberty as 'a zero-sum game' where 'a gain for one side necessarily entails a corresponding loss for the other side.' I see no reason why that should be the case, and I think that is fundamentally incompatible with our nation's long tradition of pluralism and religious freedom ...

"Make no mistake — there is no mystery about which side Ms. Feldblum thinks should win," said Lee.

Feldblum did not respond to a request for comment from the Bay Area Reporter.

In an essay on Medium, she wrote that she "did not recognize the person Senator Lee was talking about."

"Senator Lee used quotes attributed to me to paint a picture of a person bent on suppressing religious liberty in this country. That is not me nor will it ever be. Those quotes were either misconstrued or taken out of context," wrote Feldblum.

She wrote that she asked Lee several times to meet with her "so he could hear my views directly."

"He chose not to," wrote Feldblum.

No one from Lee's office returned a message seeking information about his opposition to Feldblum.

Murray said Lee was the only senator objecting to Feldblum's nomination and said she had "strong support from Republicans and Democrats in the Senate."

Murray said the blocking of Feldblum's confirmation was an "unprecedented power grab by the majority that would permanently shift the balance of power in the Senate" and that the work of the commission "is going to come to a grinding halt" because the five-member commission will no longer have a quorum.

Feldblum's nomination was paired with that of two Republican nominees so, by blocking Feldblum's confirmation, Lee also blocked the confirmations of the two new Republican nominees. The only way to force a vote on the nominees would have been for Senate Majority Leader Mitch McConnell (Kentucky) to allow a procedural vote to end Lee's block. McConnell did not allow one. That left the EEOC, as of January 3, with just two members.

On January 3, Feldblum acknowledged publicly that her hopes of staying on the commission seemed dashed.

"Today at noon my commission on the EEOC expires. What a wonderful almost nine-year run I have had!" wrote Feldblum in a Facebook post. "I have been blessed to meet and work with hundreds of dedicated and awesome EEOC staff people across the country. (My heart goes out to them now as they suffer the effects of the government shutdown.) Thank you to everyone who worked so hard for my confirmation. We certainly gave it our best shot. Now is the time to fight even harder for diversity, safety, and equity. There is no other way!"

Feldblum said she "cares deeply about both religious liberty and LGBT rights" and will continue to fight for those rights.

According to the EEOC website, Feldblum, while on the commission, focused on "employment of people with disabilities, pregnancy accommodation, sexual orientation and transgender discrimination, harassment prevention, the structure and process of the federal sector complaint system and strategic planning for the commission."

ADA work
Feldblum is known generally for her work on the Americans with Disabilities Act, which passed in 1990, prohibiting discrimination in employment, public accommodations, and other areas against people with disabilities. The law also covered people with HIV infection. She is best known to the LGBT community as a key counsel in the drafting and negotiations on the Employment Non-Discrimination Act, which did not pass out of Congress and has been renamed the Equality Act.

Feldblum has been serving on the five-member commission since April 2010, when President Barack Obama put her onto the commission using a procedure that enables him to circumvent a Senate confirmation vote temporarily — called a recess appointment because it can be done while the Senate is on recess. Her eventual Senate confirmation vote, and that of three other Obama nominees to the EEOC, was held up for months by an unidentified Republican senator — or senators — using the Senate rules that enable any senator to put a hold on an appointee's confirmation vote. The Senate gave final approval to Feldblum's confirmation through a voice vote on December 23, 2010. It confirmed her second term in December 2013 by a 54-41 vote.

Feldblum served for a year as a law clerk to U.S. Supreme Court Justice Harry Blackmun. She also served for a time as legislative counsel for the American Civil Liberties Union in Washington, D.C. Prior to joining the EEOC, she was a professor of law at Georgetown University and co-director of its Federal Legislation and Administrative Clinic.