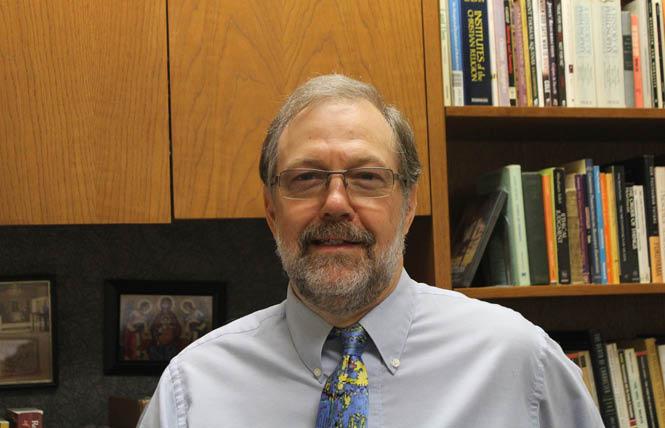 Medical professionals, suicide prevention groups, and law professors filed amicus curiae briefs May 14 asking the entire 6th U.S. Circuit Court of Appeals to reconsider a three-judge panel's decision that the First Amendment allows university professors to refer to transgender students by the honorifics of a gender with which they do not identify.

In January 2018, Shawnee State philosophy professor Nicholas Meriwether did not refer to a trans woman (referred to in the lawsuit as Jane Doe) with female pronouns. Doe is being represented by San Francisco-based National Center for Lesbian Rights.

According to the opinion, written by Judge Amul Thapar (who was appointed in 2017, and was reportedly considered for the Supreme Court by former President Donald Trump) on behalf of a panel of three judges, Doe was referred to with masculine pronouns on the first day of class. Meriwether habitually refers to students as "Mr." or "Ms." After class, Doe approached Meriwether to demand being referred to with female pronouns and titles.

"This was the first time that Meriwether learned that Doe identified as a woman," Thapar stated. "Meriwether paused before responding because his sincerely held religious beliefs prevented him from communicating messages about gender identity that he believes are false. He explained that he wasn't sure if he could comply with Doe's demands."

Meriwether claims Doe told him "then I guess this means I can call you a c**t," if he did not refer to her by her correct pronouns and honorifics, according to Thapar's ruling. Shortly thereafter, Meriwether proposed a compromise where he would refer to Doe by her last name, instead of by an honorific.

Roberta Milliken, the acting dean of the College of Arts and Sciences at Shawnee State, advised Meriwether that if he did not refer to Doe as a woman, he'd be violating university policy.

Meriwether referred to Doe with masculine honorifics yet again, however, prompting Milliken to threaten disciplinary action. Meriwether asked if he could put a disclaimer in the syllabus noting that he was using students' preferred pronouns under compulsion from policy and not of his own accord. Milliken rejected this option.

"When Meriwether again asked whether an accommodation might be possible given his sincerely held beliefs, Milliken shot him down," Thapar's decision stated. "She said he had just two options: (1) stop using all sex-based pronouns in referring to students (a practical impossibility that would also alter the pedagogical environment in his classroom), or (2) refer to Doe as a female, even though doing so would violate Meriwether's religious beliefs."

After an investigation — which included witness testimony from Meriwether, Doe, and two other trans students, the university's Title IX office concluded that "Meriwether's disparate treatment [of Doe] ha[d] created a hostile environment," in violation of university policy.

Afterward, the Shawnee State faculty union filed a grievance on behalf of Meriwether, asking the university to vacate the disciplinary action and allow Meriwether to continue speaking in accordance with his religious beliefs.

Meriwether filed a lawsuit, and on February 12, 2020, the District Court for the Southern District of Ohio dismissed it.

The 6th Circuit reversed the district court, ruling that Meriwether's refusal to refer to Doe by the correct pronouns and honorifics was protected by the First Amendment.

"Our court has rejected as 'totally unpersuasive the argument that teachers have no First Amendment rights when teaching, or that the government can censor teacher speech without restriction,'" Thapar stated. "Simply put, professors at public universities retain First Amendment protections at least when engaged in core academic functions, such as teaching and scholarship.

"If professors lacked free speech protections when teaching, a university would wield alarming power to compel ideological conformity," he continued. "A university president could require a pacifist to declare that war is just, a civil rights icon to condemn the Freedom Riders, a believer to deny the existence of God, or a Soviet émigré to address his students as 'comrades.' That cannot be."

In a brief filed May 14, the American Academy of Pediatrics, American Medical Association, and National Association of Social Workers asked the court to reconsider.

"A growing body of scientific research has confirmed that transgender students face severe discrimination that has serious consequences for their health and educational outcomes," the brief states. "Transgender individuals who face discrimination in school are far more likely to experience serious psychological distress, substance abuse, financial instability, homelessness, incarceration, and suicide. Multiple studies have found that more than half of transgender people who were harassed or bullied while in school have attempted suicide. Those staggering rates reflect a public health crisis to which many universities are now devoting urgent attention."

The brief states that contact with supportive environments leads to better life outcomes for transgender students.

"Institutions such as Shawnee State University should be supported, not penalized, for adopting polices that require professors to foster an inclusive environment for transgender students, including ensuring that students are called by names and pronouns that affirm their gender identities," the brief states.

The Trevor Project, a West Hollywood-based nonprofit focused on suicide prevention, joined the American Association of Suicidology in filing its own brief the same day.

"[The] decision is contrary to precedents from both this court and others affording public schools broad latitude to ensure their faculty and staff adhere to policies intended to protect at-risk students, while simultaneously ensuring robust protection of academic freedom," the brief states. "The panel opinion took the position that Meriwether could 'call on Doe using Doe's last name alone' as an 'accommodation' for Doe in Meriwether's class. But such an 'accommodation' is the essence of discrimination, and disregards this court's precedents recognizing public universities' broad authority — and indeed, responsibility — to enforce policies that foster a 'hostile-free learning environment,' so long as the utterances regulated by those policies are 'not germane to the subject matter' of a professor's class."

The brief states that First Amendment rights must be "applied in light of the special characteristics of the school environment."

"Young transgender adults subjected to the use of incorrect pronouns in the classroom are at risk of harm to their mental health, including an increased risk of suicide," the brief states.

More than 100 law professors signed onto a third brief the same day.

"This case began because a professor mistakenly used the incorrect honorific. Mistakes happen, not least around gender, and they do not merit punishment," the brief states. "But Professor Meriwether refused to correct his mistake. He instead came to court objecting that administrators at his school were telling him to say certain words in his classroom, and not to say others.

"Framed at this level of generality, Professor Meriwether's speech was being abridged. But as every public employee knows, this is not the level of generality at which the First Amendment operates," the professors continued. "Public employees do not have the right to say whatever they want at work, and professors do not have the right to label their students in any way they see fit. Were it otherwise, our classrooms would no longer remain the kind of respectful, civil spaces that foster a 'robust exchange of ideas.'"

The professors argued that the restrictions on speech from the university were indeed tolerable under the Constitution because they refer to address, proper use of which is necessary to the robust exchange of ideas, and not to the free discussion of issues relevant to the course material.

"The words in question are modes of address, not positions taken as part of a discussion," the brief states.

"No one thinks academic freedom would shield a professor who used a derogatory epithet to address a student, or who expected a student to respond when called upon in that way," the brief continues. "It is hard to imagine that academic freedom would even protect instructors who wrote in their syllabus that they would be refraining from calling certain students a slur in class only because their universities disallow it."

The Alliance Defending Freedom, which filed suit on Meriwether's behalf, stated on its website that the issue is purely one of academic freedom.

"The message from the university is loud and clear: You must endorse the university's favored ideology or be punished. There is no room for dissent," a post on its website states.

"Tolerance is a two-way street," ADF senior counsel Travis Barham stated. "Universities are meant to be a marketplace of ideas, not an assembly line for one type of thought, but apparently, Shawnee State has ignored that foundational truth."

The 6th Circuit did uphold the district court's decision that the university's policy did not violate due process. The university's non-discrimination policy was clear, Thapar ruled, but the court nonetheless held it violated his rights to freedom of speech and the free exercise of religion.