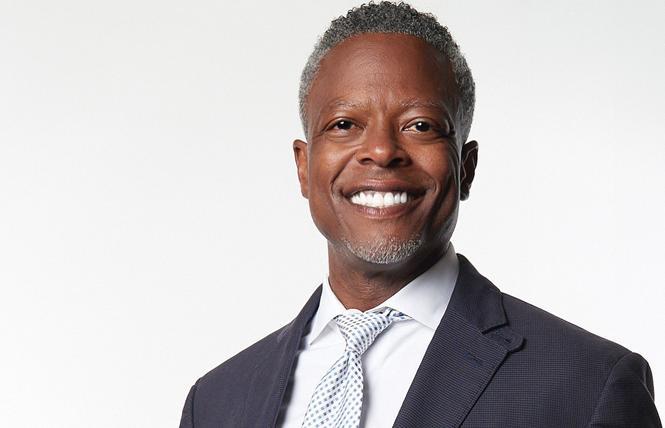 A gay Black San Francisco firefighter is suing the city, alleging discrimination against him on account of his race and sexual orientation.

Keith Baraka, 55, was the first openly gay firefighter at Station 6, which is located at 135 Sanchez Street in the Duboce Triangle neighborhood, according to a copy of the complaint filed in San Francisco Superior Court and provided to the Bay Area Reporter.

He first joined the San Francisco Fire Department in July 1997, according to the complaint, and has been continuously working for it since that time. He is seeking relief under the California Fair Employment and Housing Act through the suit, which was filed January 19.

Attorney Angela Alioto, the former mayoral candidate and past president of the Board of Supervisors, is representing Baraka.

"It's just become overwhelming," Alioto told the B.A.R. January 25. "In May or June, I'm not exactly sure, a report came out from the City and County of San Francisco — a workforce report. Stunning results about a lack of African American hiring, a lack of promoting, the number of people terminated."

Baraka told the B.A.R. later that day that he has decided to file the suit now because he feels that not only is he being retaliated against, but so too are members of the LGBTQ-affinity group within the department, SF ResQ.

"After numerous attempts to rectify the wrongs outlined in my complaint, I've gotten absolutely nowhere. In fact, they have used the disciplinary process to punish me for bringing this to their attention," Baraka said. "SF ResQ, the employee group, are experiencing a weaponized form of attack. To me, that's deplorable. It's terrible."

According to the complaint, being at a station so near the Castro neighborhood did not provide a safe haven from discrimination.

"During his time at Station 6, Mr. Baraka not only witnessed maltreatment of the neighborhood residents because of their sexual orientation and gender identity by his fellow firefighters — he was also a target of similar harassment himself," the complaint states. "Mr. Baraka was consistently harassed based on his race and sexual orientation. His locker was broken into; his name was erased from the assignment board; when he entered the room, all non-Black personnel would leave. This went on for many years. This treatment occurred within the ranks of his peers and was further sanctioned by his supervisors."

After Baraka complained, he himself was disciplined, the complaint alleges.

"Keith is an avid advocate for civil rights and he complained each time he was treated unfairly," Alioto said. "They laughed at him; demoted him."

The complaint states that Baraka was subjected to slurs at work.

"At one point, members of Station 6 were featured in a local magazine, called 7x7. Mr. Baraka was present for the group photo and wore his helmet with the rainbow Pride sticker. It was visible in the photograph," the complaint goes on to state. "The magazine cover was framed and hung on the wall of the station house. Shortly after, Mr. Baraka observed that it was on the floor and broken. He was told by another firefighter 'We don't want that picture in here.'"

The complaint quotes lesbian Fire Chief Jeanine Nicholson as stating last summer that "we are not doing a good job in terms of recruiting a good amount of diverse candidates."

The complaint states that it is clear that Baraka was adversely affected by racism and homophobia in the department.

"[Nicholson] admitted the fact that barriers to promotion for members of the department's diverse ranks were issues known to the management and to her when she ascended to the role of chief. Thus, it is clear that there is rampant discrimination within the Department and those in management positions were aware of this fact," the complaint states. "Mr. Baraka has been one of its victims."

"I took a job as a recruiter for the department to make things better," he said. "The chief never really put any money into making sure we have a recruitment division to meet the needs of the department and making it reflective of the community we serve."

Baraka had told the B.A.R. in 2019, on the occasion of Nicholson becoming the fire chief, that he was "cautiously optimistic."

"I am just very hopeful this new chief will do the right thing," Baraka said at that time. "I am always hopeful, but again, we can do better."

But now, he said, "I said I was hopeful and my hopes were dashed."

"I think it's terrible that we have the first LGBTQ chief of the San Francisco Fire Department treating fellow community members as she has," Baraka said. "In fact, I've compared her to Roy Cohn. That's how bad she is."

(Cohn targeted federal officials based on real and suspected homosexuality while serving as chief counsel to the late Senator Joseph McCarthy, R-Wisconsin, during the Second Red Scare. Cohn, long said to be gay himself, died of AIDS in 1986.)

Baraka said that the department refused to publish a history of SF ResQ that it was asked to write.

"We worked very hard to meet the tight turnaround and got it in on time," Baraka wrote to the B.A.R. January 26. "The chief did not like what we wrote and refused to publish it."

Baraka stated that employee groups organize the department's presence at civic festivals, and that SF ResQ was given this task for the 2019 Pride parade. Nonetheless, SF ResQ was not included in the chief's formal invitation (ostensibly on its behalf) to the Pride parade.

Baraka stated that the department said this omission was caused by a clerical error (which he does not believe).

"These acts send a clear message to others," Baraka wrote. "By removing our names from the invite list also implies that we had nothing to do with the hours of work and over $10K to produce events at the Trans March, the Dyke March, the Pride March, AND having a booth at the festival pavilion! Prior to SF ResQ taking ownership all we had was a parade contingent. It was a slap in the face to all the hard work we put in. Shame on her."

In a statement late January 25, San Francisco City Attorney communications director John Coté stated, "The city takes equal employment issues seriously and is committed to fostering a welcoming workplace free of discrimination or harassment based on race, sexual orientation or any other protected characteristic.

The San Francisco Fire Department declined a request for comment January 26, referring the B.A.R. back to the city attorney's statement.

Alioto said she has a good chance of winning the case.

"I don't file anything I can't win," Alioto said. "My chances are excellent. The racism in the City and County of San Francisco is throughout. It's unbelievable."