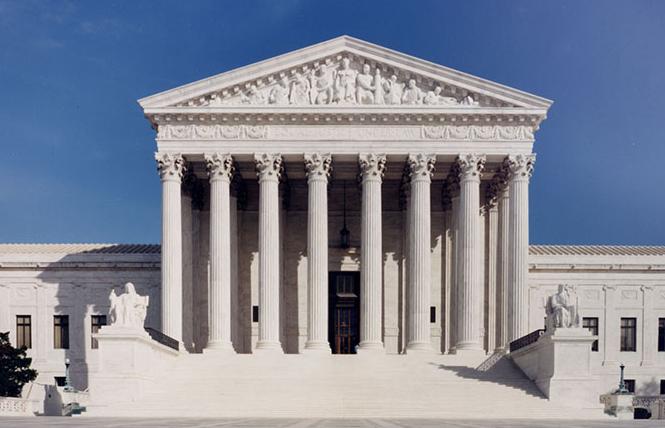 The U.S. Supreme Court has declined to hear a transgender bathroom case.

It was a discernible ray of light flashing across an otherwise dark and stormy sea: The U.S. Supreme Court Tuesday declined to accept an appeal from a group of students challenging a public school's policy of allowing transgender students to use high school restrooms and locker rooms consistent with their gender identity.

After weeks of escalating attacks on the rights of transgender people by the Trump administration, the Supreme Court announcement in Doe v. Boyertown Area School District felt like a win to LGBT activists.

"This is an enormous victory for transgender students across the country," said Ria Tabacco Mar, senior staff attorney for the American Civil Liberties Union's LGBT & HIV Project. The ACLU represented Aidan DeStefano, a trans student, and a coalition of LGBTQ youth groups that intervened in the lawsuit to support the Boyertown, Pennsylvania school district's pro-transgender policy.

But it's also a confusing development. While the Supreme Court left intact a pro-transgender student policy, two years ago, it essentially vacated one.

In the 2017 case, the high court vacated a 4th U.S. Circuit Court of Appeals ruling in Gloucester v. G.G. in which the lower court ruled that Title IX of the Education Amendments Act of 1972 — which prohibits discrimination based on sex by federally funded educational institutions — also prohibits discrimination based on gender identity. The 4th Circuit ruling would have allowed Gavin Grimm, a transgender student in Gloucester, Virginia, to proceed with his challenge against the school district's policy of requiring students to use a restroom that corresponds with the gender listed on the student's birth certificate.

In the current case, the high court simply refused to hear the appeal of a 3rd Circuit ruling that upheld the constitutionality of a Boyertown school policy that allowed students to use a restroom of the gender with which the students identify.

Petitioner Joel Doe and other students challenging the pro-trans Boyertown policy argued that it violates their right to privacy and amounts to sexual harassment. They were represented by the conservative Alliance Defending Freedom.

"No court has accepted the notion that transgender people are a threat to others," Mar said Tuesday. "In the few challenges that have arisen to transgender-inclusive policies, courts have uniformly allowed those policies to continue. Today's announcement from the Supreme Court reflects that consensus."

Eden Heilman, legal director for the ACLU of Virginia, which is representing Grimm in the second go-round of the Gloucester case, said Tuesday's Supreme Court action in the Boyertown case is a "victory for trans students because the [lower] court upheld a decision that found trans-inclusive policies do not violate anyone else's privacy rights."

But, she said, the ACLU will continue to press the Virginia case "because we are asking the district court to decide schools are not only permitted, but required, to treat trans students equally under the law."

"The vast majority of people in this country support equal treatment of all students, including those who are transgender," Orr said in a statement. "The lawsuit challenging Boyertown's supportive school policies was a political stunt brought by an anti-LGBTQ organization whose agenda is to strip transgender people of basic legal protections. The lower courts rightly rejected that hateful agenda, and we are relieved that the Supreme Court has allowed their decisions to stand."

Tuesday's action stood in stark contrast to a long litany of attacks by the Trump administration against transgender people, including students. In May alone, the U.S. Department of Health and Human Services has proposed to revise regulations under the Affordable Care Act that would allow discrimination based on gender identity in health care. And, HHS finalized a rule to enable health care providers to refuse certain services by citing personal religious and moral beliefs. The Department of Housing and Urban Development proposed a rule to allow homeless shelters receiving federal funds to turn away transgender people seeking help.