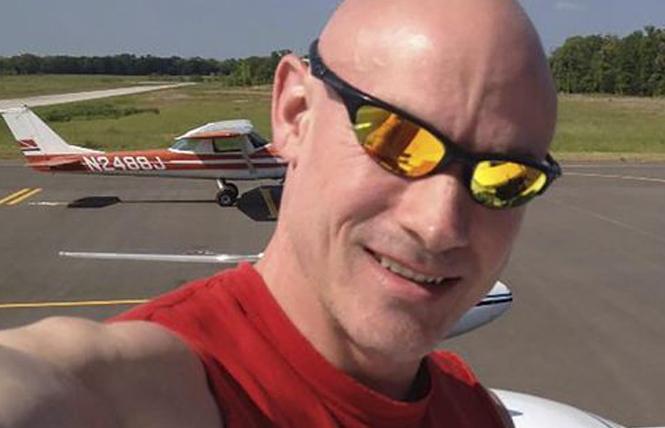 The sister of David Zarda, above, who died before his case was resolved, is fighting her late brother's firing from a recreational parachuting company.

In what one legal expert called an "aggressive move," the U.S. Supreme Court announced Monday that it will take up the issue of whether existing federal law prohibits discrimination based on sexual orientation and gender identity in the workplace. The eventual ruling has the potential to give a strong boost toward equal treatment of LGBT people in the workplace or to dramatically set back advances made over the past several decades.

The court has agreed to review lower court decisions in three cases that define the limits of Title VII of the Civil Rights Act. Title VII prohibits discrimination based on sex in the workplace. The cases will be heard during the court's next term that begins in October.

Two of the three cases ask whether sex should be read to also prohibit discrimination based on sexual orientation. In one of those cases, the lower appeals court said yes, in the other, it said no. Those two cases are being consolidated and will be heard together.

The third case asks whether Title VII should be read to prohibit discrimination based on a person's status as transgender, or based on sex stereotyping.

Shannon Minter, legal director for the National Center for Lesbian Rights, said he was surprised to hear the court took all three appeals.

"This is an aggressive move and suggests that the court wants to resolve whether Title 7 protects LGBT workers," said Minter. "These will be hugely important decisions for LGBT people and underscore the urgency of passing federal and state laws that expressly prohibit discrimination based on sexual orientation or gender identity, so that these critical protections do not depend on the courts."

Minter added that, while he thinks the legal arguments on behalf of LGBT employees are strong, "this is an extremely conservative court."

"These cases will tell us a lot about whether this court can deal fairly with issues affecting LGBT people," said Minter.

The cases
The two consolidated cases regarding sexual orientation include:

Altitude Express v. Zarda: This appeal comes from an employer in New York, challenging a 2nd U.S. Circuit Court of Appeals ruling that said Title VII does cover discrimination due to sexual orientation. The case involves a recreational parachuting company, Altitude Express, which fired one of its trainers, David Zarda, after learning he was gay. Zarda died before his lawsuit could be resolved, but his sister has pursued his claim. The 2nd Circuit covers New York, Connecticut, and Vermont.

Bostock v. Clayton County: This appeal comes from a gay man in Georgia, challenging an 11th U.S. Circuit Court of Appeals decision to dismiss his Title VII lawsuit. Gerald Bostock was an employee working in child advocacy for the Clayton County Juvenile Court System for 10 years. But after he joined the Hotlanta gay softball league and urged other players to consider volunteering for the county agency, it fired him. Bostock filed suit, saying his firing violated Title VII. The 11th Circuit (which covers Georgia, Florida, and Alabama) dismissed the lawsuit, saying it had already ruled that sexual orientation discrimination is not covered under Title VII.

The third case, regarding gender identity, is: Harris Funeral v. EEOC. This appeal comes from an employer in Michigan and asks whether gender identity or transgender status is covered under sex discrimination in Title VII. The employer, RG & GR Harris Funeral Home, fired a longtime male employee after he began transitioning to female and refused to wear a man's business suit supplied by the funeral home.

The employee, Aimee Stephens, first took her complaint to the Equal Employment Opportunity Commission, which ruled in her favor. The 6th U.S. Circuit Court of Appeals said sex discrimination in Title VII includes transgender discrimination. On appeal to the Supreme Court, the funeral home argued that its dress code applied equally to men and women and that the courts do not have the authority to say that sex includes gender identity. The reason the word "sex" was added to Title VII, said the funeral home, was to ensure "equal opportunities for women."

This case may be the most attractive to the conservative justices because they could deny protections to transgender employees and all LGBT people by simply claiming the lower courts have no authority to expand the definition of sex in federal law. The 6th Circuit includes Michigan, Kentucky, Ohio, and Tennessee.

"Federal non-discrimination law has been an important source of protections for transgender people," said Levi. "The legal case for protecting transgender employees under Title 7 is strong."

But there is risk, said Levi.

"The Supreme Court could create an artificial line that somehow distinguishes sex discrimination from discrimination on the basis of a person's transgender status or status of being gay, lesbian, or bisexual. If it were to do that, it would undermine an important source of protection against employment discrimination and significantly narrow the kinds of claims that LGBTQ people could bring."