Build out of Castro Muni station elevator pushed back 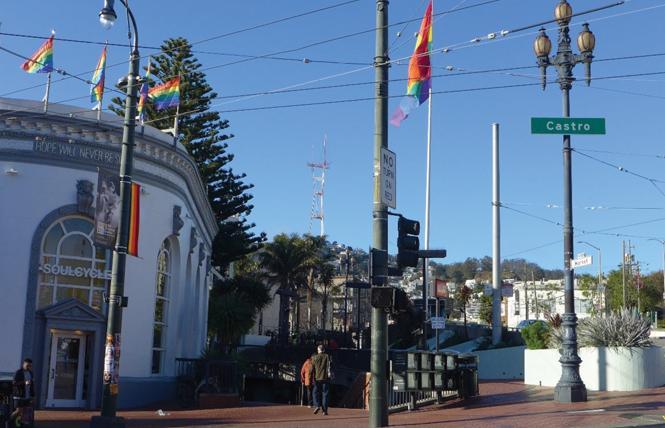 Two city agencies first proposed in 2016 adding a second, more accessible elevator to the Castro Muni Station, considered the front entrance into San Francisco's LGBTQ district. Nearly six years later three different gay men have represented the neighborhood at City Hall and there have been as many designs for the new lift.

The cost for the project has also increased from an initial estimate of $9 million to $14.5 million. A website for the project, as of December 9, listed its predicted completion as being sometime in 2024.

In 2020, city officials had told the Bay Area Reporter they expected work to begin sometime in 2021, with the build out taking at least 18 months. Yet, with just three weeks left to the year, construction has not commenced.

At the December 7 meeting of the board that oversees the San Francisco Municipal Transportation Agency, Director of Transit Julie Kirschbaum noted that the elevator was still in the "design phase" and getting it built was the agency's "highest priority" for the coming year. She also said the agency is looking at adding a second elevator to the LGBTQ district's other underground subway station at Church and Market streets.

Overseeing construction of the Castro station elevator will be the city's Public Works Department. Spokesperson Rachel Gordon told the B.A.R. December 9 that SFMTA is reviewing the bid for the project before it goes out.

"Project will go out to bid next month at the earliest," Gordon wrote in an emailed reply. "The NTP (notice for construction to proceed) typically occurs six to eight months after the bid goes out. Duration of construction is estimated at 20 months to get to substantial completion. At this point, we're looking at late 2024."

After years of debate and pressure from neighborhood leaders and transit advocates, SFMTA last December agreed to include four stops in the new elevator. They will be located on the Muni station's platform for trains headed downtown (or to the city's eastside as Muni's announcements now say), the concourse level, a walkway accessed via the station's entrance plaza, and Market Street where several bus lines make stops.

The current elevator for the Castro Muni Station is across the street near Pink Triangle Park where 17th Street meets Market Street. When it is out of service, wheelchair users and others with mobility issues that prevent them from using stairs have no way to access the station.

As the B.A.R. has previously reported, the elevator project includes several upgrades to Harvey Milk Plaza, the station's multi-level entrance area named in honor of the city's first gay supervisor who represented and lived in the Castro. The plaza's existing lighting fixtures will be replaced and its red bricks will be removed to install sparkle grain integral color concrete that matches the paving installed when the sidewalks along Castro Street were widened.

The plaza project will also widen a segment of the sidewalk fronting Market Street headed toward Collingwood Street. As for the elevator shaft, it is to be translucent so station agents can monitor its usage.

City officials had pushed back their initial timeline for the elevator project in order to allow for community discussions to take place on a proposal to completely redo Harvey Milk Plaza. It is a separate project being overseen by the Friends of Harvey Milk Plaza that has also faced delays, and gone through multiple architects and design concepts.

Initially estimated to cost $10 million, an exact price tag and funding source for the plaza project remains unknown. In September, a committee of the San Francisco Arts Commission voted in support of the latest plaza revamp proposal that would see a covered, smaller stairway leading to the underground subway station built and various elements added that would honor Milk's legacy.

The design still needs to be refined and win approval from the various city and regional oversight bodies that need to sign off on it. It continues to face vocal opposition from those who argue less severe changes to the current plaza design could achieve the same goal of improving the site's accessibility and memorialization of Milk.

For more information about the Castro elevator project, click here.