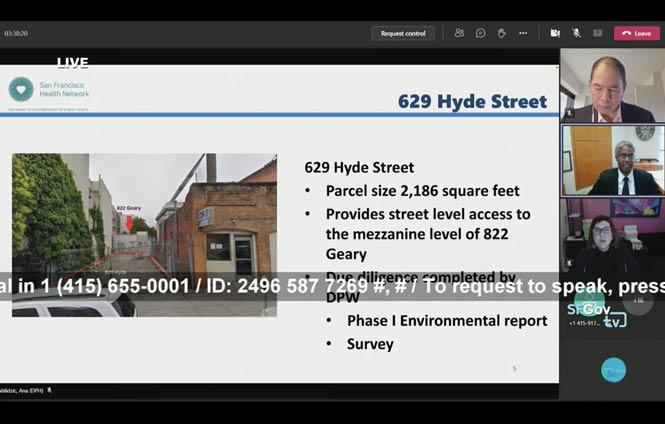 A slide shows the property being proposed for purchase by the city for a supervised consumption site. Photo: Screengrab

A panel of three San Francisco supervisors unanimously approved December 8 the purchase of a site in the Tenderloin that may be used as a supervised drug consumption facility.

As the Bay Area Reporter previously reported, Mayor London Breed's office announced November 16 that it is interested in opening a facility and that it had found just the place for it — a site, at the corner of Geary and Hyde streets, that consists of an 8,875 square foot building and an adjacent 2,186 square foot parcel.

Before legislation to purchase the sites can be voted upon by the full board, it had to be heard by the supervisors' budget and finance committee, which consists of straight allies District 6 Supervisor Matt Haney, District 4 Supervisor Gordon Mar, and District 11 Supervisor Ahsha Safaí.

Haney, who is running for state Assembly in the district covering much of eastern San Francisco, introduced a nonbinding resolution — which successfully passed in October — urging Breed to declare a citywide state of emergency around the drug overdose crisis so that the city can move forward with implementing a supervised drug consumption facility. Haney was pushed to do so after a

While Breed has not issued an outright state of emergency declaration, she introduced the legislation for the city to purchase the property discussed at the committee meeting.

Supervised consumption sites — also called overdose prevention sites or supervised injection facilities — are places where drug users can consume pre-obtained drugs under the eye of trained staff. Advocates argue it is necessary to implement in San Francisco, where the number of accidental drug overdoses dramatically rose from 259 in 2018 to 712 in 2020 — and is on track for a similar death toll this year.

Proposed site
The property being considered for purchase is at 822 Geary Street and 629 Hyde Street, according to Andrico Penick, the director of the real estate division of the city's general services agency. It is currently owned by Georgios Markoulakis and Crisula Markoulakis. The price is $6.3 million.

"Both properties are being sold as a pair," Penick said. "The prior use of this site was a Goodwill store. As I explained, these parcels are contiguous."

Showing the supervisors pictures of the interior of the larger Geary Street address, Penick said "you can see it's a very large open space. It has fitting rooms and is uniquely situated to the use which the Department of Public Health would like to put it."

Dr. David Pating of the San Francisco Department of Public Health spoke to that use.

"822 Geary and 629 Hyde are ideally located in an area of highest need," Palting said. "So it's for this reason that we think this is a positive site for a crisis diversion unit and a safe consumption site."

Mar, who represents the Outer Sunset, asked the city officials a pointed question: "why hasn't there been more extensive community outreach prior to the purchase?"

Penick replied that "part of the timing was based on the availability and suitability of this site," later clarifying that four sites in the area had been looked at, and that this site was currently on the market and had received bids from other potential buyers.

Asked Mar: "Is there a sense we are going to miss the opportunity to purchase this building? Is there an impending deadline?"

Answered Penick: "What made this place unique and desirable is the fact that it is a twin property, which is contiguous ... we can have one project insulated while we move forward with another that may have legal challenges that, in case of forfeiture, would lead to us losing a vacant lot and not a whole building."

Haney, who represents the Tenderloin and South of Market neighborhoods, said that while he's a "very, very, very loud and active proponent" of supervised consumption sites, "this cannot be done haphazardly or with shortcuts."

"This is not at all my ideal procedure to say the least," Haney said, saying some constituents may feel the city is telling them, 'We're buying the building and, well, we'll talk to you about it later.'

"This would not be my preference, doing it this way," he added.

Nonetheless, Haney felt that "this is a property that can meet the needs" of the city in creating a supervised injection facility, and so the resolution was amended so that the budget committee will have to hear back regarding an outline of services and a timeline in the next three months.

Public comment
Many people phoned in to public comment to declare their support for the purchase. Only one person was opposed.

Jacob Turner of Oakland said that "I have lost friends, classmates and much of my community to overdoses."

"Every day, we lose two people to overdoses in San Francisco," Turner said. "Please implement the acquisition at Geary and Hyde."

McCoy called in to say that "in my 20s, I spent a large portion of my time in the Tenderloin. I injected drugs wherever I could. ... I had an untreated AIDS diagnosis and was constantly being seen at local hospitals.

"I would have definitely used a safe consumption site because I didn't want to use in the street," McCoy said. "When you're dead, you don't get second chances."

The one caller who was opposed was a Tenderloin resident who only went by the name Lee. He said that District 6 is already saturated with drug use.

"And now you want to put more in D6?" Lee asked. "You're making it a Disneyland for drug users."

Haney responded that the site may decrease public drug use. Safaí said that as the overdose crisis continues to get worse, "we need to be going more to try new things more aggressively."

"I've never seen it this way in 21 years," he said of San Francisco.

The amendments and resolution then passed 3-0.

Selby critiqued the proposal to buy a new building for the site.

"I support safe injection sites as a part of our efforts to halt the horrific deaths occurring in our streets," Selby said. "I would prefer the sites be located within existing facilities so they can get off the ground quickly. I think the community needs to be involved in the process to balance making sure the services are where there is greatest need, and that our most vulnerable neighbors are secure."

Mahmood said that a safe consumption site must be paired with tougher law enforcement action, particularly against drug dealers when their product turns out to be lethal.

"I am in favor of this proposal and safe consumption sites as part of a holistic plan to address our opioid epidemic. While not a panacea, they have proven to be effective at curtailing overdoses and getting our most disadvantaged off the streets," Mahmood stated. "We need to not lose sight though of ensuring we take a holistic approach to solving our opioid epidemic. We need to provide more stable housing, abstinence treatment for those who are ready for it, and hold dealers accountable — even with charges of manslaughter — to ensure the supply of drugs is reduced as well."

Assembly candidate David Campos, a gay man who is currently on leave as chief of staff to San Francisco District Attorney Chesa Boudin, did not respond to a request for comment.

The Alice B. Toklas LGBTQ Democratic Club will have a town hall on overdoses Wednesday, December 8, from 7 to 8:30 p.m. at Manny's, the gay-owned cafe and event space at 3092 16th Street in the Mission district.

Updated, 12/8/21: This article has been updated to include comments from Assembly candidate Thea Selby.

Updated, 12/9/21: This article has been updated to include comments from Assembly candidate Bilal Mahmood.