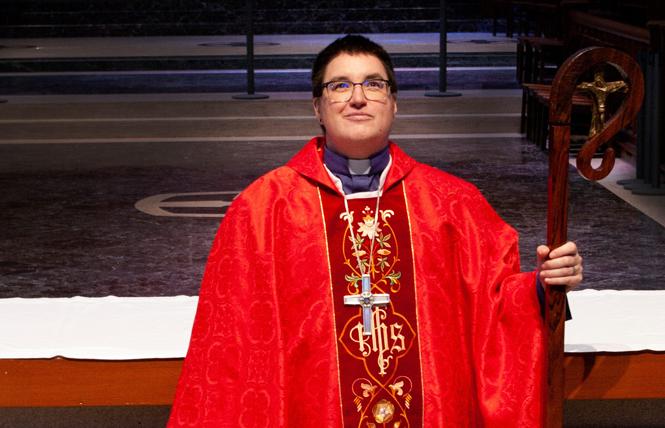 "I want to explore this crazy conflict between Christianity and LGBTQIA folks," said Stereotypes podcaster Christopher Beale. "We'll open up the Bible and take a closer look at what it does and does not say about queerness."

This week's Out in the Bay — Queer Radio and Podcast features Stereotypes' third episode, "The Bishop & the Bulletproof Vest," which examines the relationship between religion and queer people. Beale gets into it with Lutheran Bishop Megan Rohrer, the U.S.'s first openly transgender bishop of a major denomination.

It's a richly produced, in-depth conversation augmented with music, sound from Rohrer's bishop installation at Grace Cathedral in September, and a smattering of homophobic, transphobic church officials' voices. Rohrer calmly explains, among other things, that:

"There's a lot more gender diversity in scripture than grumpy people might point out."

"You're mistaking people's feelings for rational arguments. You can't ever have a debate that's going to change someone's mind if what they have is a feeling."

We finish our half hour with the title track of Bay Area musician Marilyn Mitchell's new album, "Lives Aligned." Mitchell was lead guitarist of — in her Bandcamp page's words — "all-transgender girl rock band Lipstick Conspiracy" for eight years. She's now lead guitarist of tribute band Nott the Hoople. We hope to have her on Out in the Bay for a full interview and more of her music soon.

Out in the Bay: Updates on SF State's Family Acceptance Project
Sign up!