Milk-Moscone memorial defaced in the Castro 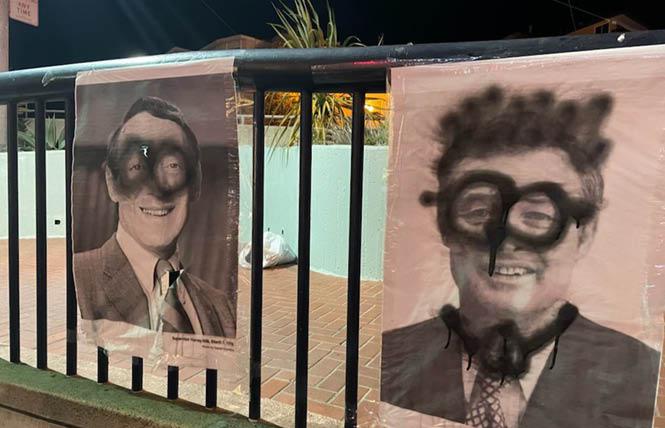 A temporary memorial to slain San Francisco Supervisor Harvey Milk and Mayor George Moscone — who were killed 43 years ago last week — was defaced in the Castro neighborhood December 1.

The person or persons who disfigured the images drew circles around their eyes, and in Milk's case, ripped a hole into the part of the image where his forehead is — which multiple observers noted evokes his assassination by ex-supervisor Dan White.

The temporary memorial was placed in Harvey Milk Plaza last week as part of the annual commemoration of the pair's assassination, which the B.A.R. reported on and which has occurred each year since the events of November 27, 1978.

Edward Wright, the co-president of the Harvey Milk LGBTQ Democratic Club, which is responsible for the commemoration and memorial, told the Bay Area Reporter December 2 that the images of the two trailblazing supporters of queer civil rights were to remain up for one week after the November 27 memorial.

Wright said that the club made the decision to keep the vandalized photos up — with a written statement providing context.

"We had a chance to replace the images with ones that weren't defaced," Wright explained. "But we wanted to not hide the disrespect and disregard."

Wright said that the response to the vandalism from the community has been "outrage."

"Even in 2021, even in the Castro, even in San Francisco, we see the same reactionary forces that drove Dan White 43 years ago," Wright said.

White assassinated Milk and Moscone, whom he considered were opposed to his more conservative worldview, after Moscone announced White would not be reappointed to his seat on the San Francisco Board of Supervisors after he'd resigned, citing low pay. White, a former firefighter and police officer, had represented much of the Excelsior neighborhood, which at the time was predominantly white working class, and Milk represented the Haight and then-ascendent Castro neighborhoods. They were elected at the same time in November 1977.

White was convicted of voluntary manslaughter, instead of first-degree murder a year later, which resulted in the White Night riots after LGBTQs descended on City Hall to protest the more lenient verdict. White ultimately died by suicide in 1985, less that two years after his release from prison.

The context statement posted by Wright at the site states, in part: "In the 43 years since the assassination of Harvey Milk and George Moscone, we have seen immense progress. We have also seen the countless ways that progress isn't a straight line, that every step forward is met with pushback, that even a simple memorial to those we've lost can be met with disregard and disrespect; that the same fears and hate and privilege that motivated Dan White motivates many today. Even here, even now.

"Let this be a reminder to our self-styled liberal, progressive, welcoming San Francisco: freedom is not a box to be checked, it's a constant struggle," the statement continues. "The work continues."

Jennifer Li, whose Facebook lists the City and County of San Francisco as her employer, posted pictures of the vandalism to the social media site.

"Was on my way to a glasses appointment and saw this," Li stated. "It's disturbing the vandal put a hole in Harvey's forehead as well. This is beyond disrespectful, gross, and homophobic."

David Campos, a gay man who is currently running for the 17th District Assembly seat (which includes the Castro along with much of the city's eastside) and who is on leave as chief of staff to San Francisco District Attorney Chesa Boudin, shared Li's post. On his Twitter account, he wrote, "Very upsetting and disturbing to see the defacing of memorial to Harvey Milk and George Moscone in the Castro. That this happened in [the] heart of the LGBTQ community reminds us that hatred is still alive, even in San Francisco."

Campos did not respond to a request for comment December 2 asking if he had anything to add to those remarks.

His chief rival for the District 17 seat, straight ally Supervisor Matt Haney, who represents supervisorial District 6, which includes the Tenderloin and much of the South of Market neighborhood, called the vandalism "disgusting and deplorable" in his own statement to the B.A.R.

Selby wrote in a statement to the B.A.R., in part, "I am disappointed and saddened that someone would deface the memorial to Harvey Milk and George Moscone and respect the Milk club's decision to keep it up as a reminder that we must always fight for our freedoms, that tolerance is not automatic, and that we must continue to fight for LGBTQ justice to this day."

Mahmood wrote in a statement to the B.A.R. that "the defacing of this memorial is a sad reminder that the fight for equality is not over. Harvey Milk fought for a better and more accepting city of all San Franciscans, and this disrespectful action only solidifies our will to keep working toward a world of acceptance and equality."

Gay District 8 Supervisor Rafael Mandelman, who represents the Castro on the board today, stated to the B.A.R. December 2 that the vandalism is "outrageous and upsetting."

"I stand with the Milk club in their condemnation of this callous disregard for humanity demonstrated by this vandalism," Mandelman stated. "This incident reminds us of the hate all of the 'Us's' still face; the fight against that hate is far from over."

San Francisco Police Department Officer Adam Lobsinger stated to the B.A.R. December 2 that "I was unable to find a police report" on the incident.

Wright said that the club did not report the incident.

Wright stated that the memorial will come down in a few days, as was previously planned.

Updated, 12/2/21:This article has been updated with comments from SFPD.