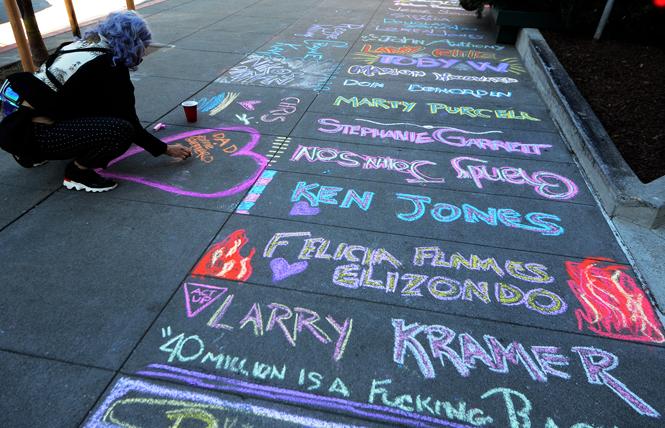 Castro Street sidewalks were covered with names and memories of people lost to AIDS and other ailments during the Inscribe event to commemorate Worlds AIDS Day December 1. Asked by a passerby curious as to what was happening, Diane Sciarretta, left, wrote the names of the persons' father and stepfather who died early in the epidemic before effective treatments were available. Photo: Rick Gerharter

Names were written in chalk onto Castro Street sidewalks as part of Inscribe on World AIDS Day to colorfully remember those lost to the disease, now in its 40th year, and the COVID-19 pandemic that began over a year ago.

Throughout the day December 1, people picked up chalk and were invited to write the names of friends and loved ones or draw images. This year some people also inscribed the names of people who were lost to the COVID pandemic.

In past years Inscribe took place in conjunction with the Harvey Milk Civil Rights Academy, with students from the public school in the Castro named for the slain San Francisco supervisor taken out on a field trip to write names up and down the street. The school did not participate this year due to concerns regarding COVID, according to George Kelly, 61, a gay man and longtime HIV survivor who has organized Inscribe since its inception seven years ago. Kelly said he found out his HIV status in 1984.

This year's Inscribe was a bit quieter than previous iterations, but there was a steady stream of people stopping by Kelly's table in front of the Bank of America building at 18th and Castro streets. The heaviest concentration of names could be seen around Kelly's table and in front of Cliff's Variety at 479 Castro Street. Inscriptions in front of Cliff's commemorated members of the Sisters of Perpetual Indulgence, including Sister Bertie, Sister Freeda Swallow of Palm Springs, and Sister Karma Za Betch.

"Millions of people have died of AIDS," Kelly told the Bay Area Reporter. "Age, race, color, nationality, it didn't matter, AIDS does not discriminate. Even the wealthy, Rock Hudson, Freddie Mercury, Sylvester, they all succumbed to HIV/AIDS."

Kelly noted that he had 46 friends that he wanted to honor. All of them died of AIDS. He thinks Inscribe helps people mourn and also celebrate the lives lost.

"The community loves it," Kelly said. "I live in this neighborhood. I know most of the merchants, I go in and out of these shops and restaurants, and I'm happy to know some of the owners and managers."

Kelly said that he asked the merchants how they felt about having chalk markings in front of their businesses.

"Most of the merchants knew someone that had passed of AIDS personally and they welcomed the idea," Kelly recalled. "They thought it was a great idea. So the community embraced the idea. I gave a presentation to the Castro Merchants Association, and they liked the idea, so they've allowed me every year to lead this project and encourage people, and just to remind people that AIDS is not over."

Masood Samereie, a straight ally who's president of the Castro Merchants, said World AIDS Day is a reminder of the "immense and devastating impact of the AIDS crisis has had and continues to have on many communities in the world."

"We support the Inscribe event because it is a critical local reminder of the special, tragic, personal history our beloved neighborhood has with this deadly pandemic," Samereie stated in an email. "We feel it is imperative that everyone, young and old, has the opportunity to reflect on this dark period in our history, and in doing so, cultivate appreciation for what came after and because of it: the rise of the modern gay rights movement."

He added, "The struggle and loss resulted in a strong LGBTQ+ community identity, landmark legal protections and opportunities, and breakthroughs in medical science. The Castro we know today was forged through HIV- and AIDS-fueled protests and demonstrations, loud or quiet, and we will continue to be the proud voice of our city."

One of the people who stopped by Kelly's table was Bishop Megan Rohrer, leader of the Sierra Pacific Synod of the Evangelical Lutheran Church in America. Rohrer is the first out transgender person to be ordained as a minister in the Lutheran church and the first out trans bishop. They were quiet and somber as they knelt down to write a half-dozen names of people they knew who had died of AIDS.

"I regularly visit the 18th and Castro public altar," they said, referring to the fact that the outside wall of the Bank of America building is often used for community announcements and to commemorate those who have died. "Being across the street from one of the very first places where HIV and AIDS was ever mentioned in the world for me is a way to honor and remember those we have loved and lost, but also a way to have public ritual, particularly with those who might have been harmed by churches. During HIV and AIDS many churches disowned people."

Rohrer was referring to the old Star Pharmacy, which stood in the space now occupied by Gyro Express at 18th and Castro. Star Pharmacy posted notices about a "gay cancer" when people first began getting sick 40 years ago. That "cancer" soon came to be known as AIDS.

"For people of faith to show up at public ritual spaces is a way to honor the faith they carry, even when they had to make up rituals on their own," Rohrer said. "For me it's important in my own mourning process because the number of people that I have lost, particularly when I was caring for the homeless and hungry, it's a way that I can celebrate their names and be a part of that legacy. It also reminds me because I'm a history nerd, and I love all those images of people acting up and writing in the streets and advocating for HIV and AIDS. To have it be a legacy that we kind of continue to take to the streets and make sure that people don't forget that HIV and AIDS is not over, we still need a cure, we need a vaccine for this epidemic."

As the bishop spoke several men stopped by and took pieces of chalk to inscribe the names of deceased friends and loved ones. Names included Sonny Booker, Don Denny, Cristo Jewkes, and even "my cousin Richard." Some people wrote the names of well-known victims of the disease, such as dancer/choreographer Alvin Ailey and artist Keith Haring. Also written was "a COVID death, Castro Lion Dennis Hale. You are a dear friend. You are missed. Love, Troy."

Michael Rouppet, a 53-year-old gay man, recalled holding the hands of partners as they passed.

"I remember when Kaposi's sarcoma first made appearances," Rouppet said, referring to an HIV-related skin cancer that manifested in purplish lesions. "You would see people, and then you wouldn't see them anymore."

Rouppet has a message for today's LGBTQ youth, some of whom may not be aware of what happened 30-40 years ago.

"Our history is one of struggle," he said. "It's important to remember in order not to erase us, because if you don't know our struggles, it's erasing us and how we got here. I feel it's our duty to fight for our equality and all the things we get. We certainly fought for everything we got, but we didn't get everything we fought for. Those struggles still continue today and part of it is about empowerment and I welcome everyone into the fold to join us in solidarity."

"Queer to me is my orientation, and gay is my political stance," said Harry Breaux, 76, who has been HIV-positive since 1980.

Breaux was brought to Inscribe by Kelly, whom he once dated. They remain friends.

"This country so ignored us, the people that had AIDS in the 1980s," Breaux said, referring to the sluggish federal response to the disease that resulted in cities like San Francisco forming their own models of care. "That story hurt me deeply, because I have always and still do love this country, and thought it was the country on the planet that would stand up and take care of its people when they need it, and yet in the 1980s when AIDS hit they totally betrayed us and turned their backs on us as far as any support we could get. So we had to create our own support systems."

Breaux recalled the Shanti project, which, at the time, switched from a cancer support organization to an AIDS organization. It now serves people with HIV/AIDS and other illnesses such as cancer. He also recalled the formation of the San Francisco AIDS Foundation.

"So it's important to remind people in my opinion that even though you feel that you can be secure and you can feel that you have freedom and rights, which I feel we put before the world in the 1970s," Breaux said. "I moved here in 1970, I saw this transformation happen, and I was completely baffled in the 1980s as to how we weren't given any support, so I think it's important to keep the world knowledgeable about that and to keep whatever attention we can get for it on the planet. It's a gay freedom speak moment and the world is in need of that because of the countries that are passing the anti-LGBT laws, the way that autocratic governments are starting to crack down and exclude us again. We need to keep a presence in the publications, in the news, in the media, so that it's not forgotten that we're here."

As the men spoke, people stopped by and picked up some chalk to inscribe more names. Others slowed their pace or stopped to look down and read the various names. Inscribe continued until 9 p.m. Kelly thanked the Crayola Company, which donated the chalk.

Updated, 12/3/21: This article has been updated with comments from the Castro Merchants Association.

Hidden Mercy: untold stories of Catholic care in the AIDS epidemic
Sign up!