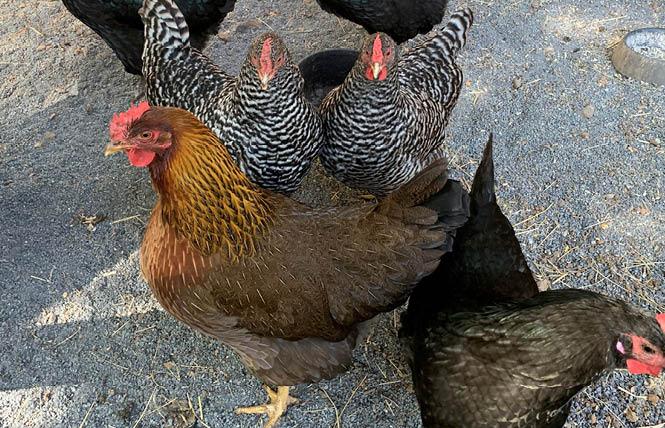 These Sonoma County chickens are not headed for any fast-food chains, homophobic or otherwise. Photo: Terry Johnson

In a long overdue politics conversation on this week's Out in the Bay (https://www.outinthebay.org/talking-politics-with-b-a-r-columnist-matthew-bajko/) podcast and radio show, Bajko fills us in on the fast-food development, new laws taking effect January 1, and a hotly-contested California state Assembly race.

On the Assembly race, Bajko reminds us that although there are several LGBTQ representatives in the Assembly, none are from San Francisco.

That could change, as gay former San Francisco Supervisor David Campos, who is on leave as chief of staff to San Francisco District Attorney Chesa Boudin, and straight, queer-supportive current San Francisco Supervisor Matt Haney are considered the top two contenders for Assembly District 17 seat now open after David Chiu resigned to become San Francisco's first Asian American city attorney November 1. It's a seat that, before Chiu, had been held for many years by a succession of LGBTQ politicians.

Bajko also outlines for us key points of several new laws that go into effect January 1 that will especially affect LGBTQ Californians. These laws include provisions for a nonbinary choice on death certificates, prohibiting universities and colleges in the state from deadnaming transgender and nonbinary students on their degrees and in other records, adding new levels of health care privacy, and requiring financial planners to be trained in LGBTQ issues.

Read more about the new laws, the Assembly race, and the Chick-fil-A controversy in Bajko's recent articles linked below.