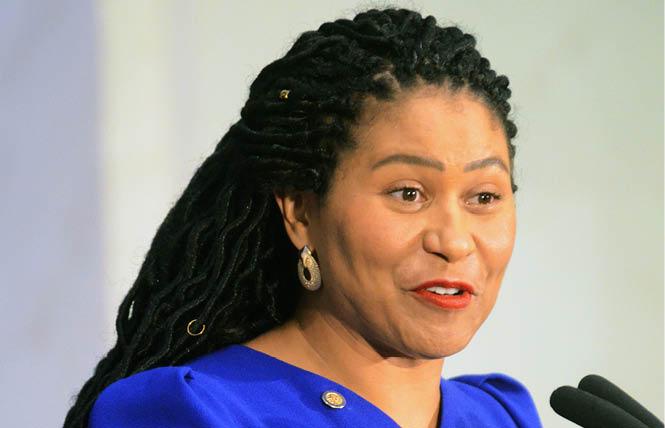 Mayor London Breed has introduced legislation for the city to purchase a building that could be used for a supervised injection facility. Photo: Rick Gerharter

Mayor London Breed's office is taking steps to potentially open a supervised consumption facility — a victory for advocates who've been pushing her to declare a state of emergency around San Francisco's drug overdose crisis.

Subsequently, Breed spokesperson Jordan Wilson told the Bay Area Reporter that Breed introduced legislation to the Board of Supervisors Tuesday that, if approved, authorizes the purchase of a site in the Tenderloin that could be used for that purpose.

The site, at the corner of Geary and Hyde streets, consists of an 8,875 square foot building and an adjacent 2,186 square foot parking lot, Wilson stated. It would be purchased with Proposition C funds for $6.3 million.

"The legislation is not prescriptive about what kind of services would be provided on the site," Wilson stated, but its purchase is "an initial step toward [the] possibility" of opening a supervised consumption facility there.

"The city is pursuing a policy that could allow the opening of the first safe consumption site in San Francisco to address the overdose crisis in our city, as early as spring of next year," Wilson stated. "We are discussing with our nonprofit partners their ability to open and operate safe consumption programs directly for those in need."

The city government is also exploring the creation of a program to partner with nonprofits in operating the facility, "identifying potential locations, and developing a strategy to ensure surrounding areas see a noticeable difference on our streets," Wilson stated.

"In addition to board approval, we will examine other steps before deciding on opening a safe consumption site on a portion of this property [at Geary and Hyde], including reaching out to appropriate state and federal government authorities," Wilson continued.

The move comes weeks after the board unanimously passed District 6 Supervisor Matt Haney's resolution October 26 calling upon Breed to declare a state of emergency around the city's drug overdose crisis, as the B.A.R. previously reported. Haney's District 6 includes the Tenderloin.

Haney, who is also running for the state Assembly seat that was vacated when Assemblyman David Chiu became city attorney, introduced the state of emergency resolution in September urging mayoral action in order to pave the way for the city to authorize, fund, and implement supervised consumption facilities.

"I think the resolution we just passed had an impact," Haney told the B.A.R.

"People are dying everyday from overdoses and public drug use is rampant. The Tenderloin is ground zero for the overdose epidemic. We have to get people inside and off the streets safely and into care and treatment now. We can't wait any longer," he stated. "Safe injection sites save lives, and if the mayor and city attorney are prepared to move forward, which I hope they are, I will work closely with the neighborhood and health care providers to make sure we do it effectively and safely. Let's move forward, it'll save lives."

Supervised consumption sites, or supervised injection facilities, are places where drug users can consume pre-obtained drugs under the eye of trained staff. Advocates argue it is necessary to implement in San Francisco, where the number of accidental drug overdoses dramatically rose from 259 in 2018 to 712 in 2020 — and is on track for a similar death toll this year.

For this reason, Breed had heretofore been supportive of opening supervised consumption facilities only if laws were changed first. An effort by gay state Senator Scott Wiener (D-San Francisco) to do just that has been delayed until at least January.

In a statement November 16, Wiener wrote, "I applaud Mayor Breed's decision to move forward with the purchase of a site to use for any number of the behavioral health needs we have in San Francisco, including a potential safe consumption site."

"Right now, a huge amount of drug use in San Francisco occurs on our streets," Wiener continued. "Safe consumption sites bring people in off of the streets and are a harm reduction measure so people can use more safely. They save countless lives; data from the sites operating across the world tells us this. Trained staff members administer supplies like clean needles and Narcan, which reverses overdoses. Drug testing kits are available, too. Once people are ready, they can also use these sites to get connected to treatment and other important resources."

Haney introduced his emergency resolution at the urging of longtime gay activist Gary McCoy, who once battled addiction himself.

McCoy, who is director of policy and public affairs for HealthRIGHT 360 and co-chair of the Alice B. Toklas LGBTQ Democratic Club, held a hunger strike in front of City Hall in August urging action, as the B.A.R. previously reported.

Speaking to the B.A.R. November 16, McCoy said he's "still processing" the development but it's "great news."

"I think a lot of us advocates had heard rumblings for the last couple of weeks, but were not sure until today," he said. "I haven't spoken to the mayor yet. I did call the mayor's office, though, and thanked the staff. ... It's a big deal for people who use drugs and people who struggle."

"I think it's very brave given the legality everyone in the country is dealing with," he said, adding he is grateful for Chiu's support.

When asked if he'd heard Chiu was going to support the opening of a facility, McCoy told the B.A.R. that "I haven't heard he would support in his capacity as city attorney, but I've heard he's working on it — he certainly supported it as an assemblymember, and even sat with me in support during my hunger strike for a bit at City Hall."

Chiu spokeswoman Jen Kwart stated that the city attorney's office is providing legal advice to the city on this matter.

"The city is proposing to purchase a property for behavioral health services, which could potentially include a safe consumption site, among a number of other uses," she stated. "We are working to provide city policymakers with the best possible legal advice on this issue and look forward to conversations with the appropriate state and federal government authorities."

In a statement, Campos told the B.A.R. that "as the person who first proposed opening a supervised injection site five years ago, I applaud Mayor Breed for taking this step. We cannot afford to lose another life to the overdose crisis. This needs to open as soon as humanly possible."

Selby stated to the B.A.R. November 17 that she is "thrilled to see the leadership that opening up a supervised injection site shows," adding that "we have done this before — with gay marriage and Gavin Newsom. Sometimes the laws are not just and this is one of those situations."

Updated, 11/17/21: This article has been updated with comments from Thea Selby.