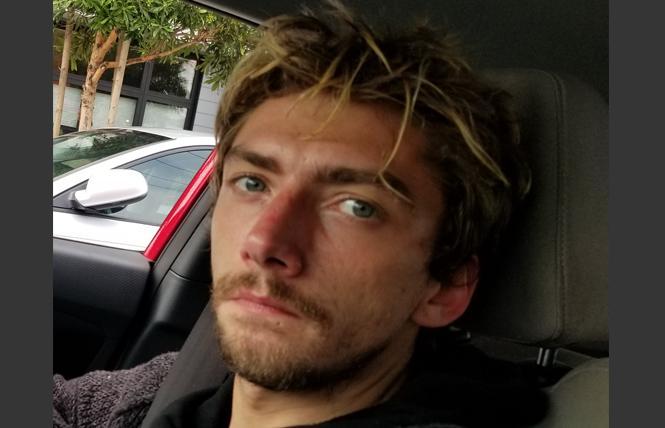 A memorial service was held November 12 in Ohio in memory of a gay San Francisco man who died from burn injuries in the South of Market neighborhood last month as police continue to investigate the case.

As the Bay Area Reporter previously reported, Eric Michael Moren, 28, was discovered at 4:18 a.m. October 25 by San Francisco police in the area of Minna Street and Russ Alley. He was pronounced dead at the scene and police consider Moren's death suspicious.

Larry Ackerman, a gay man who is Moren's ex-husband, told the B.A.R. November 13 that he is in Ohio with Moren's family. Moren was from Columbus.

"I flew in on Monday [November 9]," Ackerman said. "Yesterday we had a visitation and a service. I had a nine-minute memorial I wrote and some of his brothers spoke as well. We were all spaced out, wearing masks, and after, some of us went to a rural bar with few customers. I have 450 photos we projected and 16 video clips, many made by [Eric] himself."

Ackerman said that Moren was scheduled to be cremated November 13.

Moren was homeless, Ackerman previously told the B.A.R. Ackerman said the two were married in 2014 but Moren "ran off three months after we got married."

Ackerman said that Moren had run a cleaning business but that was apparently short-lived.

"Supervisor Haney did reach out and give condolences to some of the people who knew Mr. Moren," Honey Mahogany, a trans woman who is a legislative aide to Haney, wrote in an email to the B.A.R. November 12.

Ackerman said that he recalled seeing a message come to him over Facebook.

The San Francisco Police Department told the B.A.R. it had no updates in the case and that "your best bet would be to check in [with] the [Office of the Chief Medical Examiner] to see when they anticipate making a finding on their investigation."

A report with the cause and manner of Moren's death won't be available "anywhere from three to six months," an unnamed spokesperson for the medical examiner's office wrote in an email to the B.A.R.

This aligns with the timeline Ackerman informed the B.A.R. he was told by the medical examiner's office, which said a report would be ready in February or March.

The medical examiner's office has not answered a question about whether this is a usual timeline for such reports to be completed. Mahogany is not sure of the timeline either, but said Haney would talk to the police to inquire.

The medical examiner's spokesperson also did not answer a question about whether the three to six month timeline is related to recent issues in the office. As KQED reported September 21, a drug arrest in Utah of a San Francisco medical examiner lab analyst named Justin Volk led a former medical examiner's office employee to tell the station (speaking on the condition of anonymity) that Volk's case is "just the tip of the iceberg with respect to poor management and bad forensic policy." Volk was later fired.

KQED reported that attendance is "erratic," office procedures regarding drugs are not being followed, and the office has high turnover in key positions, leading to death investigations sometimes taking up to one year.

Ackerman said he is having difficulty obtaining Moren's backpack and other belongings from the medical examiner's office.

The restorative justice ministry of the Archdiocese of San Francisco holds memorials where people have died in the streets. It held one such prayer service for Moren at Minna and Russ streets at noon October 30, led by the Reverend Piers Lahey, a Daly City-based priest.

"We ask that you please remember in your own prayer, daily and Sunday services, all brothers and sisters who have died in violence, as well as affected family and friends, and those involved in [these] type of crimes," a news release from the archdiocese stated.