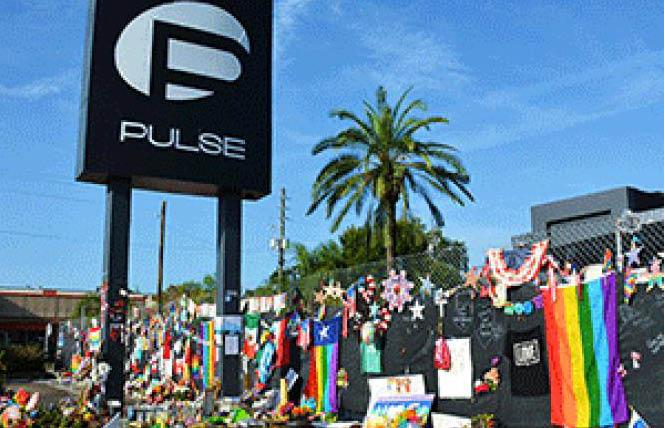 People left flowers and other items outside the Pulse nightclub in Orlando, Florida in 2016. Photo: WalterPro4755/Flickr via SFGN

A memorial to commemorate the fourth anniversary of the Pulse nightclub massacre — the deadliest single incident of anti-queer violence in United States history — will take place at Jane Warner Plaza in the Castro on June 12 at 5:45 p.m.

The event is being organized by Donnie Plungis and Christopher Vasquez, two gay men who both hail from Orlando, Florida, where on June 12, 2016 Omar Mateen killed 49 people and injured 53 others in what had been the deadliest mass shooting by a single gunman in U.S. history, before it was surpassed just one year later by the Mandalay Bay Hotel shooting in Las Vegas, Nevada.

Vasquez said that there had been spontaneous Pulse remembrances in the past; and according to Plungis, these "dissipated every year [in size]."

A small group of people held vigils for two years in the Castro.

"Last year, people originally weren't doing anything, and we agreed this year we needed to do it more justice," Plungis said in a June 10 phone interview with the Bay Area Reporter. "Because of COVID, we put it on pause, but with the movement of Black Lives Matter, particularly Black Trans Lives, we renewed our commitment. Chris and I met two years ago and since then have stayed in contact."

Plungis lost a friend, Christopher Leinonen, in the shooting.

"I had just celebrated one year of living in San Francisco," Plungis said, who added he had been visiting Orlando just days before the massacre.

"It felt crazy," Plungis said. "I remember driving by [Pulse] a few days before and wondering if I should go in."

Brandon Wolf, an LGBT activist and survivor of the Pulse shooting, stated that he hopes events such as this will keep the memory of what happened alive.

"The shooting at Pulse continues to be an inflection point for our community each June. It is a reminder of what's at stake in the fight against hatred and bigotry," Wolf wrote in a June 10 email to the B.A.R. "Events like the one taking place in the Castro keep us grounded in our commitment to honor the 49 victims of Pulse by creating a world where everyone is safe to be who they are. We will always remember the victims and we will always honor them with action."

Vasquez, who serves as the communications director for the National Center for Lesbian Rights, said that he has a friend who worked at Pulse but survived the attack.

In a phone interview with the B.A.R. June 10, Vasquez said that he hopes the event will honor the 49 people who were killed at the nightclub, and also touch upon the tragedies that are now getting more focus.

"We put together a coalition of organizations to make sure their voices are being heard and memorialize everyone lost due to police, anti-black, anti-trans, and anti-Latinx violence," he said.

Vasquez said that the event will begin with indigenous dancers blessing the space. At 6:05 p.m. there will be a spoken portion, which will feature, among others, queer activist and drag performer Honey Mahogany, San Francisco Pride Executive Director Fred Lopez, Q Bar general manager Christian Gabriel, and two speakers from the San Francisco Office of Transgender Initiatives.

There will be American Sign Language interpreters, and Vasquez said people should wear face coverings and remain six feet apart when possible.

After the speeches, it is planned that the assembly will walk down Castro Street to the corner of 18th and Castro streets adjacent to the Bank of America building, which has traditionally served as a site for people to remember lost loved ones with posters and flowers (this area used to commonly be known as Hibernia Beach).

"We've commissioned a banner made by local Latinx artists to be displayed that night," Vasquez said. "I think it's very important in this time we find ourselves in — fighting against oppression — to do a proper memorial to Pulse, which had a very special place in Orlando for the black and Latinx communities and was near and dear to my heart."

"We have to protect those spaces where it isn't the fun kinds of things and remember we have to show up and come together," Plungis said. "We hope this can be that kind of space, before Pride, that can occur in San Francisco."

Mateen died in a shootout with police the night of the massacre. A federal jury in Orlando acquitted his widow, Noor Salman, in 2018 on charges that she had helped her husband plan the attack.